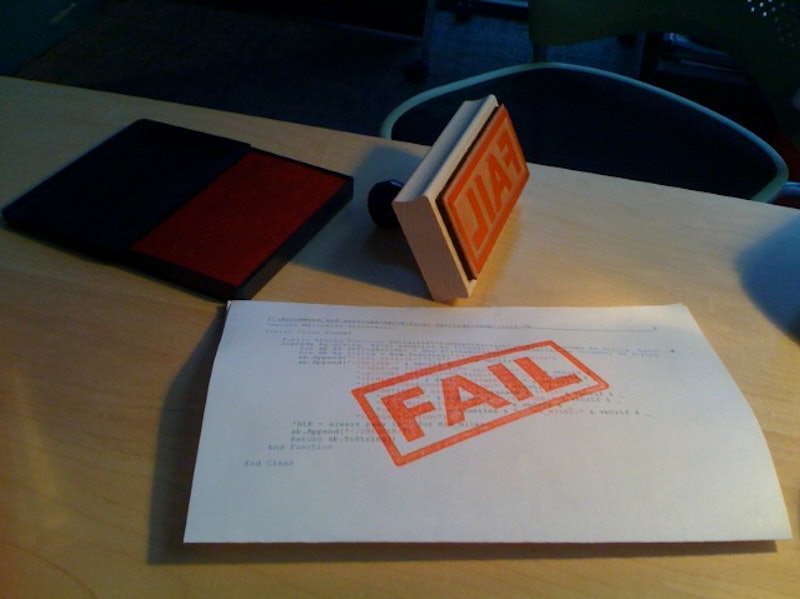 Failure is inevitable at some point for all of us, yet tolerable for few. Whether we're failing to arrive somewhere on time, exercise as much as we planned, or get through the workday without checking Facebook, dealing with failure is a skill we all need to use just about every day. Too often, however, we view failure as a sign of weakness, when it's really just a sign of being human. In her new book Rising Strong, social scientist Brené Brown, known for her self-help books and her TED talk on the power of vulnerability, offers research-backed advice on how to face our daily shortcomings and "get back up," as the book's cover reads.

Using interviews with leaders of major corporations and organizations, Rising Strong demonstrates that it is possible to recover from even the most epic failures. One of its major takeaways, according to New York Magazine's Science of Us, is that — in Brown's words — "the process of struggling and navigating hurt has as much to offer us as the process of being brave and showing up.” In other words, it's important to embrace failure as a learning opportunity rather than running away from the often uncomfortable feelings it presents.

Science of Us rounded up some of the most helpful tips Brown offers; here are a few of them, along with a number of other science-backed ways to deal with failure I discovered through some additional research. Remember: To err is human; to forgive, divine. So let's all forgive ourselves for erring every now and again, shall we?

1. Ask yourself how the failure occurred.

Rather than simply dusting yourself off and getting back your feet, stay on the ground for a while and ask yourself how you or others may have let something slip through the cracks. This can be unpleasant because you may realize you deserve more blame than you thought, Brown writes, but it can also help you learn from your mistakes.

2. Let yourself be uncertain.

It's okay if you don't totally understand what happened. Brown's research has found that people who don't jump to conclusions have an easier time recovering from setbacks. Don't stop asking yourself what went wrong, but don't rush to an answer either.

Have you actually failed, or is somebody criticizing you unfairly? Just as you might want to figure out where the information you read in an article came from, you should also consider whether you can trust the sources of your criticism. Sometimes, people throw shade at others out of jealousy or to deflect blame from themselves — and that's not your problem.

4. Separate the incident from your identity.

Remind yourself that one mistake doesn't make you an incompetent person, writes leadership and communications consultant Susan Tardanico, pointing out that Abraham Lincoln was a huge failure at many points in his life. Separating your failure from yourself can help preserve your self-esteem give you the confidence to not repeat the same mistake.

While inquiring into the sources of your failure can lead to self-improvement, let go once you've stopped learning from the experience and started beating yourself up for no purpose, writes Tardanico, citing the policy of NFL coach Don Shula to only grieve over a defeat or celebrate a victory for 24 hours.

6. Adopt an attitude of "realistic optimism."

Realistic optimists are the personality type that sees the possibility of a brighter future and knows how to get there without viewing the present through rose-colored glasses, according to Sophia Chou, who conducted a study finding that realistic optimists get better grades. These people are more likely to seek a solution to a problem, while pessimists might get discouraged and "idealist optimists" may not notice the problem in the first place.

7. Turn to the people who care about you.

A study in Psychiatry found that people who have stronger support systems — friends, family, and whoever cares about you — are more resilient to stress. So if failure is still bogging you down after trying these tips, talking it out with someone else may help get you back on your feet.