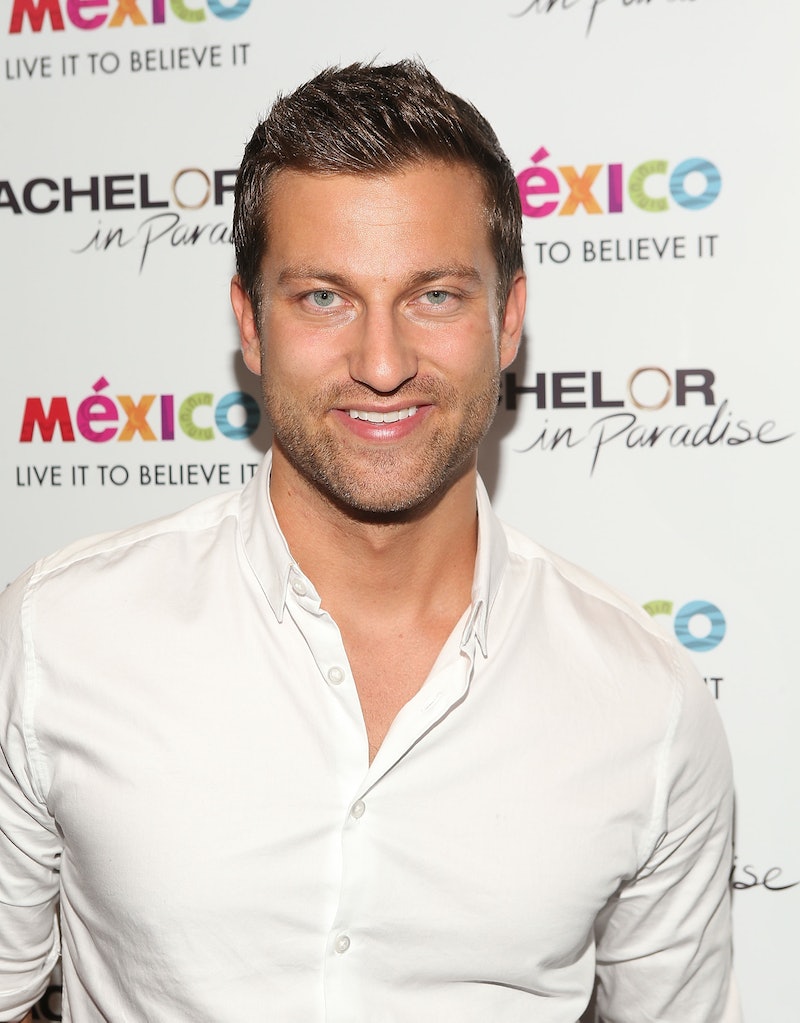 There are a few things that are a basic staple of any Bachelor Nation show: roses, referring to dating on reality TV as an "amazing journey," and... Chris Bukowski. Since he made his first appearance on Emily Maynard's season of The Bachelorette, Chris has, in some way or another, cropped up at almost every single Bachelor-related opportunity ever since, including a season of Bachelor Pad, two seasons of Bachelor in Paradise , and a surprise appearance during Andi Dorfman's first cocktail party on her season premiere of The Bachelorette. But now, that's all about to change. Chris Bukowski is officially retiring from the Bachelor franchise, and he's putting reality TV behind him for good.

If you caught the BIP after show, After Paradise, on Monday night, you saw Chris stand up and make a semi-emotional speech about how he's done making a fool of himself. And if you thought that he was kidding — because, you know, the whole retiring of the jersey thing followed by the stuffed raccoon in a jersey kind of made it seem like he was kidding — you're wrong. On Tuesday, Chris published an open letter declaring his "retirement" from all things Bachelor, and it's probably for the best.

I feel for the poor guy. After all, he's just trying to find love! In a unique way, sure, but still. And although he's seen as the joke of Bachelor Nation, his letter is very interesting and introspective of him to write. I have to give this guy props for putting himself out there in such a raw way, and finally, Chris is getting real.

1. When He Revealed The Toll Bachelor Nation Took On His Normal Life

I never watched the show prior to being first casted on The Bachelorette. My life was perfect in every aspect; I had a great family, friends and simply put, I was happy. That being said, the longing for a significant other led me to the spotlight. Looking back on it, some of the stuff I did in preparation for these shows was absolutely crazy. Television became a disease, an obsession, a sickness.

This proves that Chris actually was always a normal dude, and Bachelor Nation is just something he sort of stumbled into... and then, it became addictive. And how could it not be? The special treatment, being a celebrity — anyone would fall in love with that kind of attention.

2. When He Apologized To Jamie Otis

During the airing of BP3 I was in quite the conundrum with Jamie and Blakely. The crazy part is I really liked Jamie and what was holding me back was other people’s opinions about her. I learned the hard way: Taking others’ opinions into consideration over your own usually doesn’t work out for the best. I don’t think I’ve ever said it before, but I am extremely sorry for the way I treated Jamie during Bachelor Pad.

If you're a little fuzzy on the details, on Bachelor Pad , Chris called Jamie "desperate" and said the way he gets through having conversations with her is by staring at her boobs, so... yeah, this apology was well deserved.

3. When He Talked About How The Show Affected His Family

I’ll never forget going to my parents’ house and witnessing my dad obsess over all of the stuff being said about me. That show ruined my relationship with my father at the time and created distance between me and my mother. What did I do!? Why did I do this!? It was so not worth it. I hated myself even though you couldn’t see it.

This is really heartbreaking. It's easy to send hate on Twitter, and just as easy to forget you're sending it to a real person with a real family.

4. When He Talked About His Brief Stint On BIP 2

You just saw me again on this season of Bachelor in Paradise. What you saw is me at my absolute weakest moment, masking everything in my head behind ounces of alcohol. I returned to Bachelor in Paradise in hopes of finding a date to my sister’s wedding. I left without a single memory of my time there. That’s why I didn’t watch that episode, as much as I would have liked to. I don’t remember being there and I don’t want to watch the version of me on TV.

And it would probably be better for all of us if we just pretended that didn't happen, too.

5. When He Admitted He Felt He Had To Stay Relevant On TV To Be Successful In His Life

As my popularity fizzled, I felt the pressure from my business peers to get back into the spotlight. People weren’t showing up at the bar just to see me anymore. I was old news…and believe me I was OK with that. But constantly being told that I was irrelevant played a major role in my unexpected arrival during Andi’s season of The Bachelorette.

That's a bummer. He shouldn't feel like the success of his bar rides on the shoulders of his reality TV career.

6. When He Explained The Real Reason Behind His Retirement

My hope is whoever reads this realizes the impact opinions can truly have on others. I also want to express the importance of friends and family. Answering the phone when someone calls or returning a text message goes a long way. We’re all busy, but you can always make time for those you care about and they will do the same for you. Never be too busy for your family or friends. They’ll be there for you in the end.

And really, I'm super happy for Chris. I'm glad that he found the right time to bow out of Bachelor Nation — even though I'm definitely going to be sad he won't surprise us on any future shows. Stick to your guns, Chris! Don't let ABC seduce you into coming back unless you want to.