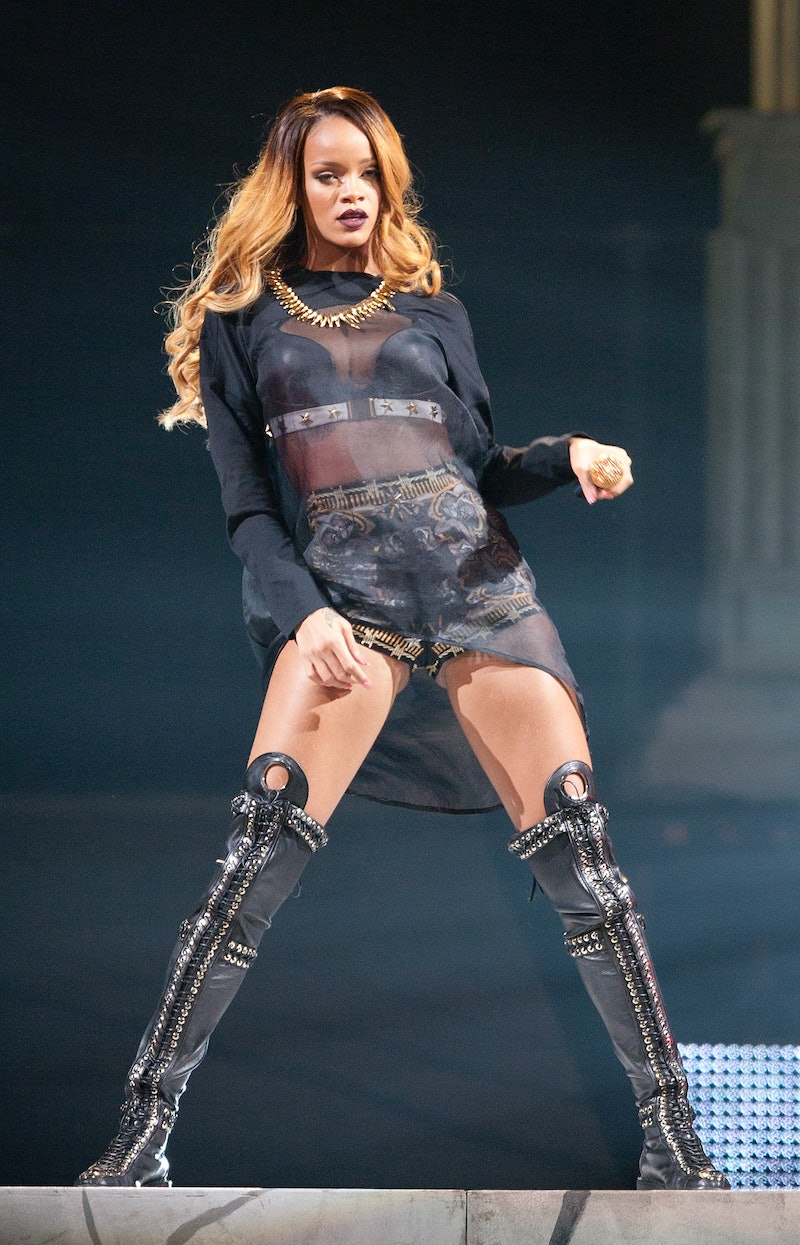 Liz Jones is apparently really concerned about the parents of Rihanna's young fans, who she thinks would be appalled at the behavior of their role model. In her article for the Daily Mail, Jones says that Rihanna is a terrible role model because she drinks, does drugs, and her outfits "invite rape." (Um, don't even get us started on that last point.)

So why do we demand that celebrities be role models at all when we know, realistically, that they'll never measure up?

It's part of this weird ownership we feel we have of all public figures. It's not enough that they just do their job; they have to conform to whatever set of moral standards our society has agreed upon for the moment. And it's not just celebrities — think about Anthony Weiner. Probably the majority of the guys you know have texted people dick pics (actually, don't think about that, that has the potential to get too weird). But because this person is a public figure, we feel it is our duty to shame him into resigning from his job.

But unfortunately, we'll never stop seeing celebrities as role models for the same reason that we'll never stop vilifying them when they make mistakes — because they're public figures, and we feel like that grants us some sort of special relationship with them. (Especially when Twitter and Instagram access makes us already feel an even tighter connection with them.) There will always be 14-year-old girls who worship Rihanna, whether their parents (or Liz Jones) want them to or not.

We can't stop the "role model" label from being thrust onto public figures, but we can make our expectations for role models more realistic. Because let's face it, everyone is a failure at some point. We can even fail our expectations of ourselves, so it's absurd to expect celebrities to live up to our ideals. Celebrities shouldn't be forced to live their lives for other people. There's no reason to create a dialogue where it seems that they've failed the public when celebrities make mistakes in their personal lives. The only important questions to ask are: "Is this person hurting someone else?" "Do they seem happy and in control?" and "Is this something I want in my own life?"

Policing celebrities' personal lives with this sort of moral panic is not only inappropriate, it's pretty pointless. If I can survive the Age of Britney Spears and come out a (fairly) functioning adult, I'm pretty sure Rihanna's teen and tween fans will eventually emerge unscathed. The worst that will come out of it is the same thing that befalls both plebeian and celebrity role models — disappointment.

After all, stars are just like us. And sometimes, we're kind of idiots.

More like this
Rihanna Is A Mom Now After Giving Birth To Her First Baby With A$AP Rocky
By Ananya Panchal and Jake Viswanath
Rihanna Wore A Sparkling Lingerie Look For Date Night With A$AP Rocky
By Allie Fasanella
Rihanna Wore Crochet Bra Tops In A$AP Rocky's New Music Video
By Dominique Norman and Kelsey Stiegman
Sandra Bullock, Girlboss Extraordinaire
By Matt Harkins & Viviana Olen
Get Even More From Bustle — Sign Up For The Newsletter