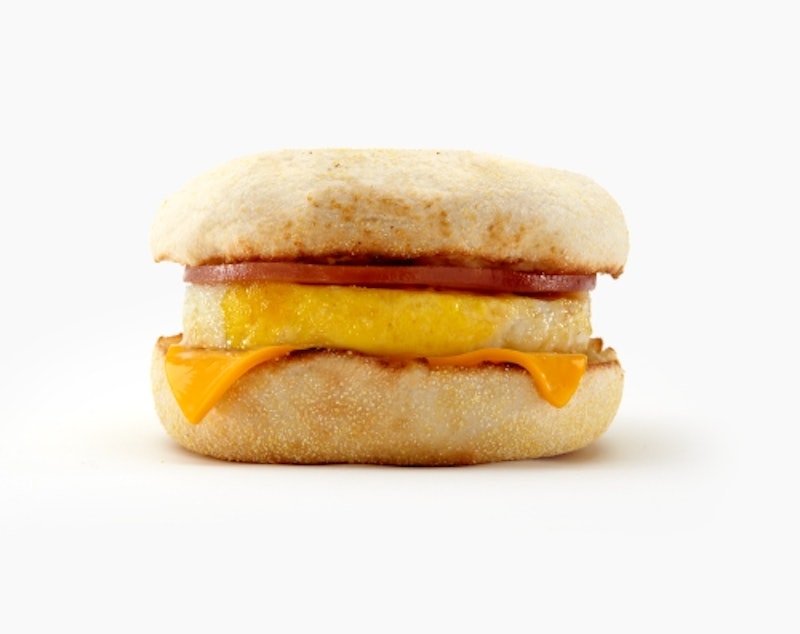 Hold the proverbial '90s phone, you guys: McDonald's all-day breakfast has been confirmed. Repeat: McDonald's all-day breakfast is actually coming — and soon! In just a little over a month, in fact! This is not a drill, people! No more do we have to pray that we make to the McD's before 10:30 a.m. arrives and turns our Egg McMuffin coaches into Big Mac carriages! All our breakfast dreams are coming true, complete with blankets of Hotcakes and some bacon on the side!

We first spotted the news on CNBC Now's Twitter feed. At 3:04 this afternoon, a tweet appeared stating that McDonald's franchisees had voted to approve all-day breakfast for 14,300 United States locations starting on Oct. 6; then, a second tweet sent out about 15 minutes later stated that the news has been confirmed. The Wall Street Journal also reported that the vote was taken last week and “affirmed on Tuesday by a franchisee leadership,” according to the company.

But even though all those sources are definitely reputable, part of me just couldn't quite believe it until I heard it from the company itself — and luckily, the old adage of “ask and ye shall receive” proved to be accurate in this case. Bustle reached out to McDonald's and received confirmation that the Operators and Operator Leadership have voted in all-day breakfast beginning nationwide on Oct. 6. Furthermore, the company also posted the news on the McDonald's Twitter feed — and if it's on social media, you know it's happening. While we're on the subject, that Twitter feed has been all kinds of amazing this afternoon, so you should definitely check it out. Seriously, you guys.

News first broke that McDonald's would be giving all-day breakfast a shot back at the end of March. At the time, the test was limited to the San Diego area — and it didn't feature every item on the not-insubstantial breakfast menu, but focused on delivering a few select favorites, like Egg McMuffins and hashbrowns, 'round the clock.

Apparently, the test was a success. We heard rumblings in July that a nationwide all-day McD's breakfast rollout might be happening in October — and it appears that these rumblings were, in fact, correct. Speaking with The Wall Street Journal, McDonald's USA President Mike Andres noted that the approval of all-day breakfast is the biggest thing to have come out of the company since McCafe — the line of coffee and espresso beverages McDonald's released in 2009. “This is the consumer's idea,” Andres said. “That's why I think this could be the catalyst for our turnaround.”

Why did it take so long for McDonald's all-day breakfast to become a reality? The big deterrent always came down to one thing: space. Each McDonald's location is built to be able to make breakfast and lunch/dinner items on the same equipment; they just can't do it at the same time. According to The Wall Street Journal, a task force headed by LeAnn Richards identified exactly what needed to be done in order for each restaurant to become capable of making both McMuffins and Big Macs at the same time. They had to find a way to keep raw eggs separate from burgers, and how to simultaneously toast buns and muffins (which cook at different temperatures). Each restaurant offering all-day breakfast will be outfitted with whatever they need to make the adjustment, which the WSJ reports could cost anywhere from $500 to $5,000 per location, depending on existing equipment.

So there you have it. It's worth noting that, as was the case with the San Diego test, not all breakfast menu items will be available round the clock. But on Oct. 6, you'll finally be able to get a selection of your favorite McD's breakfasts at any time of day. Because let's face it: Breakfast is always the best when you eat it at any time other than breakfast. Thank you, McDonald's. Thank you from the bottom of our hashbrown-loving hearts.

More like this
25 Things I've Reduced My Life To, In Addition To WFH In My PJs
By Ginny Hogan
How To Schedule An Instagram Post
By Emma Carey
How To Turn WhatsApp Read Receipts Off
By Emma Carey
12 Cheeky Instagram Captions To Use When You Haven’t Posted In Weeks
By Emma Carey
Get Even More From Bustle — Sign Up For The Newsletter