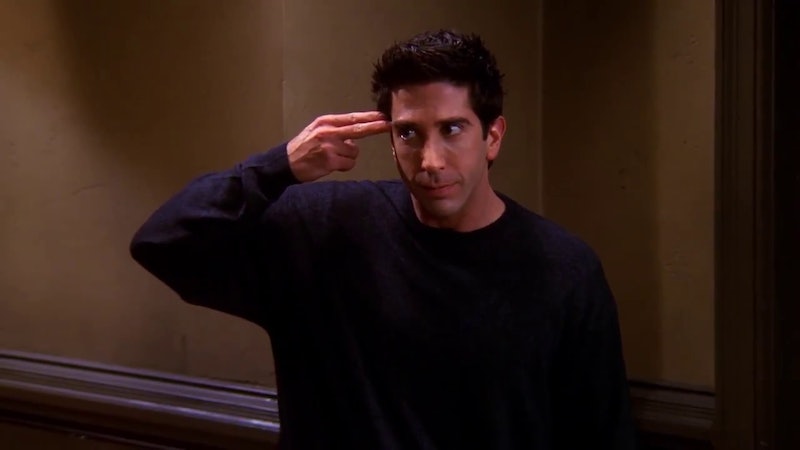 Ah, Ross — easily the most reviled of all the Friends. You know how Dong memorably recalled the dubbed Vietnamese title of Friends as "Six White Complainers?" on The Unbreakable Kimmy Schmidt ? Well, Ross is easily the biggest complainer of the whole crew, and as such, he's inspired much vitriol (well, as much vitriol as a preternaturally well-loved icon-level sitcom can possibly inspire, anyway). That said, almost all of us can fall into one of the six Friend archetypes... so inevitably, some of us are Rosses (insert Wilhelm scream here).

Yeah, though most of us hope to be typed as Phoebe or Chandler, some of us are bound to be Rosses — it's just the way of the world, unfair as it may be. I say all of this as a self-professed Ross — it's tough to admit it, but yes: I'm a gloomy, erudite, stars-in-my-eyes romantic, know-it-all nerd. You can almost literally say he had me at "hello" — I knew from his iconic world-weary "Hi" that he was, rather unflatteringly, the Friend I most resemble. So, with all that in mind, I hate to be the bearer of bad news, but here are 19 signs that you're a Ross, too:

1. You've Got Something of a Melancholic Temperament

2. You're A Little Socially Awkward...

Especially when everything is "fine."

3. ...And Flirting Is Not Your Strong Suit

We've all been there before, right? (Though hopefully not with a cousin, a la Denise Richards here).

4. Your Friends Find You Obnoxious At Times

It's OK, though, because most of the time you don't even notice.

5. You Have Boundless Enthusiasm For Your Hobbies...

6. ...Especially If Those Hobbies Happen To Include Dinosaurs

7. You Think You're A Little Funnier Than You Actually Are

Unfortunately, we can't all be Chandlers.

8. You're A Romantic At Heart

What can you say? You love being in love (and insert three weddings joke here).

9. You're A Little On The Neurotic Side

Or, as you prefer to think, you're just being reasonable.

10. You Have A Tendency To Feel Sorry For Yourself

Everything hurts, and nothing is good.

You can be, shall we say, a touch dogmatic sometimes.

12. ...And Sometimes, You Can't Help But Correct People

13. Because, Let's Face It: You Have A Tendency To Be Condescending

Hey, when you've got the higher ground, why not use it?

Yeah, as someone who dressed up as Elizabeth Bennet for Halloween in 10th grade (and was subsequently asked if I was "one of those polygamous cult people"), I relate to Ross hard on this one.

15. You Have Rage Issues

Look, Joey's arguably the Friend that's iconic for being miserly with his food ("JOEY DOESN'T SHARE FOOD"), but let us never forget that it was Ross that had so large a rage spiral after his boss ate his sandwich that he got put on leave and got sent to the psych ward.

16. Trying To Be Cool Doesn't Usually Work Out So Well

17. (And You're Willing To Try Almost Anything To Seem Cool)

Underneath your gloomy and erudite manner, you can still let loose and shake that healthy butt when the situation calls for it.

19. When It Comes Down To It, Though? You're Pretty Darn Sweet

More like this
24 Years Ago, 'Friends' Dropped Its Most Underrated Ross & Rachel Episode
By Grace Wehniainen
Meghan Markle Delivers Empowering Message About Being Yourself
By Sophie McEvoy
Snoop Dogg & Michelle Pfeiffer Lead Moving Tributes To Coolio
By El Hunt
How To Apply For 'Survivor' & Tips On How To Get Cast
By Meg Walters
Get Even More From Bustle — Sign Up For The Newsletter