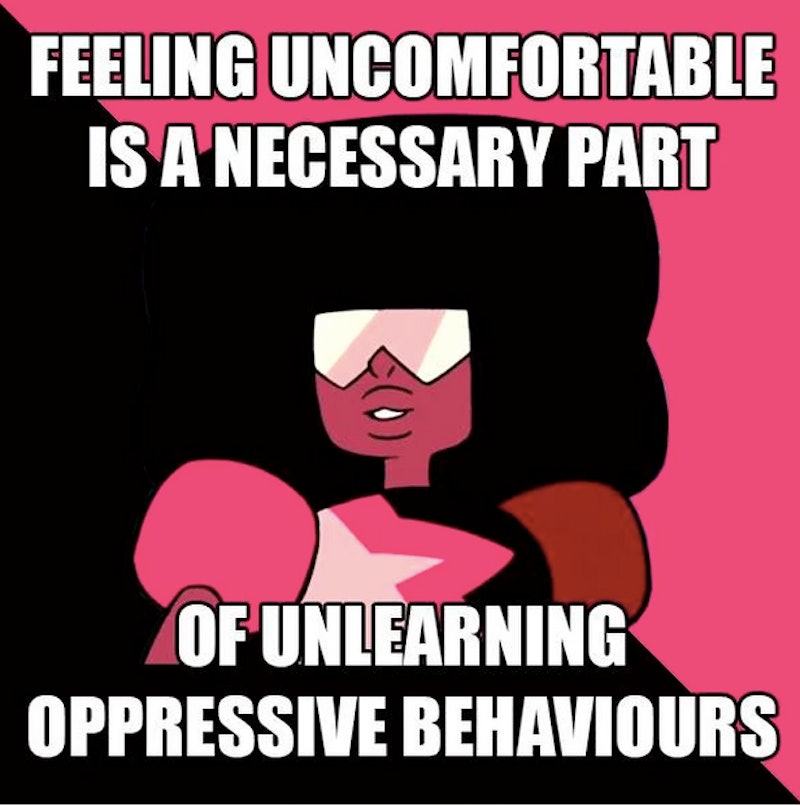 Girl Meets World actress Rowan Blanchard recently published a personal essay about intersectional feminism on her Instagram, explaining how axes of identity like race, gender, and class intersect to influence structures of oppression. Blanchard is only 13 years old, but she demonstrated a nuanced understanding of the subject matter. This is something that many white feminists in the public spotlight — from Miley Cyrus to Taylor Swift — have yet to grasp. Fear not, though. There is a plethora of intersectional feminist memes that you can throw out there the next time you notice that someone's feminism is not inclusive of all women.

Intersectionality is complicated, and it's easy to slip up. Here is what you have to remember: Feminism is about equality and justice, so ideally, the term "intersectional feminism" shouldn't even have to exist to get the point across that all women should be included. But take a look at Serena Williams, as an example — she faces a very different type of scrutiny than white, female tennis players do. Her identity as a black person is not distinct from her identities as a woman and a tennis player. These identities all intersect to inform both her perception of the world and the world's treatment of her.

It's obvious that we need to keep talking about intersectional feminism. So here are some great memes to help you do just that.

What Is Intersectional Feminism?

Intersectional feminism makes an active efforts to include all women. It is anti-racism, anti-classism, anti-ableism, body-positive, inclusive of LGBTQ+ folks, and a celebration of all forms of gender expression.

Audre Lorde said it best: "There is no such thing as a single-issue struggle because we do not live single-issue lives." Our struggles for justice are intertwined.

When you think about how different people have been marginalized, also think about why things like affirmative action and living wages are necessary to lift everyone up, and why these would be feminist issues. Dismantling the patriarchy doesn't just require an Equal Rights Amendment — it requires a thorough analysis of how different women experience misogyny differently, and taking steps to combat that.

And recognizing your privilege is incredibly necessary.

Feminism Should Be All-Inclusive

So when Nicki Minaj tries to talk about racism in the music industry, or when Black Lives Matter activists protest a presidential town hall, they're not trying to bar other topics from conversation, or saying that other people don't matter just as much. Instead, they're trying to expose the different forms of injustice that marginalized people face.

This is an important point. Back in 2001, then-First Lady Laura Bush tried to justify the War on Terror by talking about how Muslim women would be liberated — without ever actually consulting these women to see what they might want. Feminism manifests itself in many different ways. For some women, going topless might be their chosen of protest, and for others, it might be the act of choosing to wear a hijab.

Why does it matter so much to Amandla Stenberg that white people don't appropriate cornrows? Why is it so important to marginalized people to see themselves represented in pop culture and media? Well, even as feminism fights for equal pay, reproductive healthcare access, and all of these other important things, it must also fight for all women's rights to be affirmed and accurately represented in the public sphere. Because many of us never see our intersectional identities reflected in the media we consume.

Listen To And Lift Up Other Women!

Pizza feminism is great. And the original quote from Janet Mock, which refers to power instead of pizza, is pretty great, too. There are billions of women with billions of different lived experiences. We can't possibly understand them all, but there is power in solidarity, and even when people try to take that solidarity away, we can't and won't let them.

The next time you're having a conversation with someone about feminism, think about these memes. And more importantly, think about the larger concepts of intersectionality that they illustrate. If all feminists were to think critically about how different aspects of a women's identity can influence the discrimination she experiences, then we would be able to make much quicker strides toward justice.