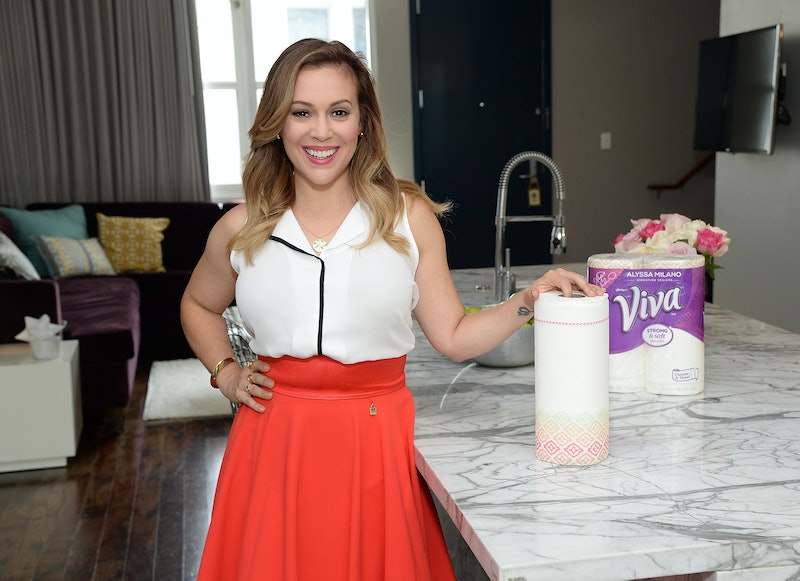 Before speaking to to former Who's the Boss actress Alyssa Milano, I didn't think too much about paper towels other than "I need to grab one to wipe up a spill." I am sure most of you share the sentiment. However, the Alyssa Milano-designed Viva Paper Towels are essentially kitchen couture. It turns out the actress and mother of two put a lot of thought into how this kitchen basic would "go" with traditional and modern kitchens.

It's also not that much different than her input into Touch, her clothing line that focuses on fitted, feminine team gear for female sports fans! For Viva, Milano wanted to add beauty to something functional and mundane, just like the time that Betsey Johnson put her pink, pop art stamp on Kleenex boxes!

Like Johnson before her, Milano has succeeded, as I cannot wait to place these pretty paper towels on my kitchen counter!

Here are five key fashion-y things I learned from my chat with the super sweet actress, who took something that I don't normally associate with beauty and changed my mind on that. Her fashion background is actually pretty extensive, thanks to Touch, and she applied her know-how to paper towels. Who knew?!

"When Viva asked me if I wanted to guest design a line of beautiful paper towels, I thought, 'That is genius, yes, I want to do that!," Milano, seen wearing a Pleione blouse, tells me. "Why wouldn't you want a beautiful paper towel on your counter?" But besides the aesthetic, she was thinking of her fellow moms, saying, "As a mom, I want to find things that make life easier for other moms. These are pretty but multi-functional. They are soft and cloth-like. You can use them like hand towels. They have many purposes. I don't have a lot of time to shop for separate napkins."

I asked Milano what her source of inspo was and if she took cues from clothing. From her perspective, interior design is an extension of fashion. "I think my main objective in the designs was to come up with paper towels that could fit in both traditional and modern kitchens. That is a tricky balance. If it's too graphic, then it looks too modern. If it's a latticework [design], then it's too traditional. It was about finding that balance."

3. Her Touch Brand Has Expanded

I first came across Milano's adorbs Touch products at a Phillies game, since I am a partial season ticket holder. I loved how this line of sports gear offered me the opportunity to wear form-fitted, low-cut, super soft shirts with my favorite team's logo, without having to break out my fabric scissors to chop them up myself.

Turns out, biz is booming for Milano on the fashion front, too. "It's not just with MLB," she says of the line. "We have expanded to all leagues, including hockey, soccer, Nascar, and college. We have all the licensing."

But is there a correlation between team gear and paper towels? Sort of! "It is similar in the respect that it is a creative process, but it's so different," Milano tells me. "When you are dealing with clothing, it's about silhouettes, what fits, what works. But what's similar is that you want to think about trends and what is big in interior design. With Touch, we look to fashion shows and trends."

Milano is intricately involved with Touch. "I probably am way more involved than they would like for me to be," she jokes about her partners. "I am very hands on with Touch. We have a great design team and it's not like I am a control freak. But you don't understand, functionally speaking, what a sports fan wants to wear in a stadium... unless you are a sports fan. As a sports fan, I have to say, 'We need a hoodie that is not a heavy fabric, since it's for spring.' I am very hands on."

The actress is so hands on, in fact, that she is ready to move on from using burnout fabric, which is huge right now. "It is important to me to have the line stand out," she notes. "We've been doing burnout for seven years. Everyone else is on it now, so it's time to move away from burnout since everyone else is doing it.

"My manufacturer says, 'Well burnout is selling right now' and my point is we have to stay ahead of trends and find the next thing."

Spoken like someone with a real understanding of fashion!

5. Her Grandmother Was A Milliner

Milano has tackled sports fashion and home design, but she's not done with creative endeavors. "My grandmother was a successful milliner," the actress says. "She designed hats. I would love to design headwear eventually." Caps? Ornate Philip Treacy-like masterpieces? She is down for whatever.

When I wonder aloud if the paper towels were almost too pretty to use, Milano shoots me down, politely so. She says, "You can use them as you would pretty cloth napkins! You can set your table with them."

Another added, surprise benefit of her Viva paper towels? The softness pampers your hands. "These are not like those paper towels where you can file your nails and clean up a mess," she jokes about rougher towels made with cheaper materials!