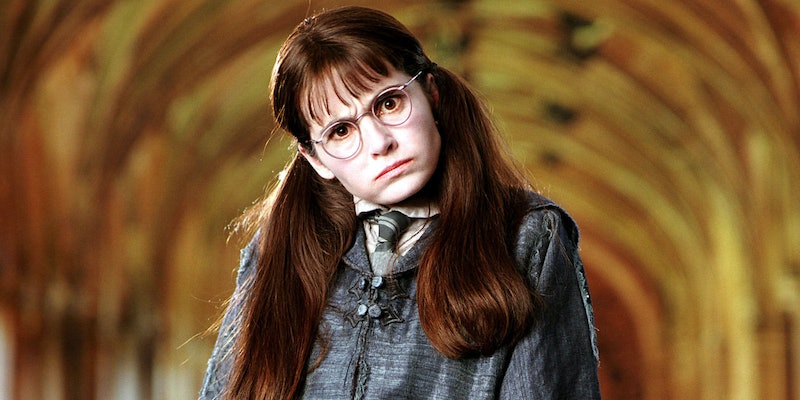 One of the best parts of the Harry Potter book launches and move premieres was dressing up in Harry Potter costumes, because, let’s be real here: Who didn’t want to be a student at Hogwarts? The crimper I bought in middle school came in handy for years later for my many Hermione Granger outfits, and I made sure to purchase plenty of extra Gryffindor scarves to make sure all of my friends were decked out in their school gear.

So what’s a Harry Potter fan to do now that the premieres have ended? Sure, we still have Fantastic Beasts to look forward to, but since Newt will be gallivanting around New York City instead of Hogwarts, the costume choices will probably be very different.

BUT NEVER FEAR. There is a day each year when HP fans can dust off their robes, grab the wands they bought at Harry Potter World, and emulate their favorite characters once again. Yep, that’s right: I'm talking about Halloween.

If you’re always scrambling to find a costume, never fear: you have seven books of characters just waiting to be chosen. And even if you’ve already worn out your Hermione Granger ensemble (is that even possible?), you still have so many options. From the obscure to the downright quirky, these HP-themed Halloween ideas will satisfy every fan’s need to constantly dress like you’re about to board the Hogwarts Express.

Looking for a group costume? Why not dress as Godric Gryffindor, Rowena Ravenclaw, Helga Hufflepuff, and Salazar Slytherin? The founders of Hogwarts each have their own unique personalities, color schemes, and props: the sword of Gryffindor and the lost diadem of Ravenclaw would both make perfect costume pieces.

Mrs. Figg And Her Cats

Whether you bring along your actual cats, or just pictures of them, you can't go wrong dressing as Harry's feline-obsessed neighbor.

Put a spin on the traditional nurse costume by dressing as Madam Pomfrey. All you need is a nurse's uniform, a bottle of Skele-grow, and a strict attitude.

One Of The Hogwarts Ghosts

Why be a traditional ghost, when you can be one of the many Hogwarts ghosts? There are so many options here, people! You've got The Grey Lady, Nearly Headless Nick, The Fat Friar, The Bloody Baron, Professor Binns, Moaning Myrtle... and if you DO decide to dress up as Moaning Myrtle, bonus points for carrying around a toilet with you.

The Mirror of Erised

All you need is a frame, a marker to write "Erised stra ehru oyt ube cafru oyt on wohsi" around the edges, and your face in the center. This one's for all the cheesy Halloween costume fans out there, because it gives you the opportunity to tell people all night long that you're their heart's desire. And if you want to take it even further... put the frame around your feet and dress in some fabulous socks. Dumbledore would flip.

Re-use that frame on Night No. 2 of your Halloween adventures, and go as a moving portrait. From the portrait at the entrance of Gryffindor common room to the screaming portrait of Mrs. Black, there are plenty of crazy characters in paintings at Hogwarts and beyond. Plus, you can stand in doorways and demand people give you a password before entering the room.

The picture above is my friend (yes, my friends are this cool), who created this amazing Hedwig costume for the last Harry Potter movie premiere. The key is to glue feet on your knees, so when you crouch down, you truly look like an owl. It's all DIY, and affords plenty of opportunities for pretending to fly around, which is just plain fun.

If you're into Herbology (like Neville Longbottom), why not dress as a plant? Devil's Snare is just creepy enough to make the perfect Halloween costume.

Then again, if you're going for the scariest costume award... why not dress as the most evil villain ever? Grab a pink sweater, a tiny bow for the top of your head, and practice your most annoying fake cough as Professor Umbridge. Plus, you can go around scribbling "I must not tell lies" on the back of people's hands all night.

Grab a garish dress and a quill, and you've got a complete Rita Skeeter costume. Just steer clear of glass jars...

The famed Magizoologist would make the perfect costume, especially since the movie Fantastic Beasts And Where To Find Them comes out November 2016. Pull out your best 1920s apparel for the perfect Newt costume, and be sure to take plenty of pictures so that when everyone's dressing as him in a couple years, you can say that you wore it first. And if your friends need costume ideas, tell them to dress as magical creatures, so you can all coordinate.

If you've got a lot of time on your hands, a ton of creativity, and maybe a talent for papier-mâché, this is the costume for you. Bonus points if all you say all night is "Mars is bright tonight."

The Three Brothers And Death

Embody the Deathly Hallows by recruiting some friends to dress as the three brothers and death. Grab a cloak, a wand, and a stone, and you've got all you need for this legendary costume.

Any Of The AVPM Characters

If you want to dress as any of the characters from Harry Potter, but with a humorous twist, try putting together one of the outfits from A Very Potter Musical. From the hilarious Umbridge to the rolling-on-the-floor Draco to Voldemort-and-Quirrell back to back, there are so many different options here. Obviously I'm a fan of this choice, because I dressed as Draco for the second-to-last Harry Potter premiere with some friends who dressed as the rest of the gang (see that photo above? That's us!). But of course, for the very last premiere, I had to pull out the Hermione Granger costume once more. Because at the end of the day, there's also nothing wrong with keeping it classic.

More like this
Rupert Grint Just Shared A *Major* Update About Ron Weasley’s Future
By El Hunt
Netflix Shut Down 'Bridgerton' S3 Rumours About A “Very Dark” Storyline
By Bustle
Here's How Netflix Should Adapt Prince Harry's Memoir Into A Movie
By Ginny Hogan
Kukulkan From 'Wakanda Forever' Has A Surprising Connection To Marvel History
By Grace Wehniainen
Get Even More From Bustle — Sign Up For The Newsletter
From hair trends to relationship advice, our daily newsletter has everything you need to sound like a person who’s on TikTok, even if you aren’t.