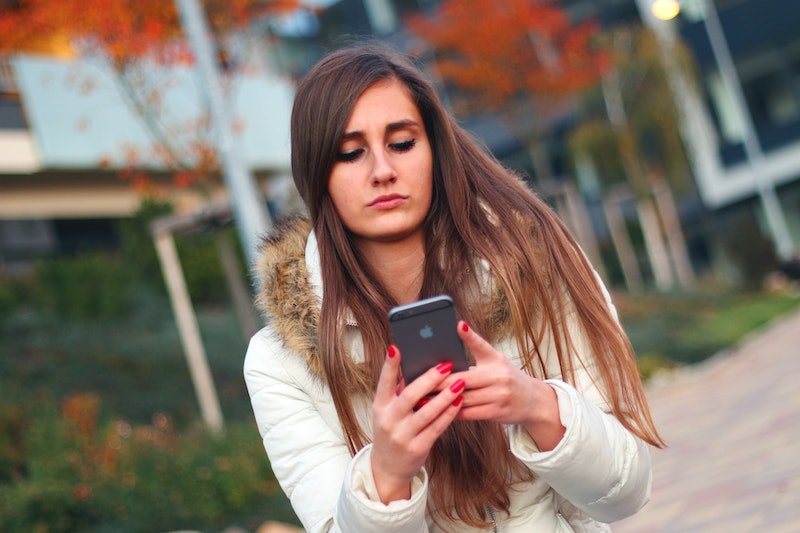 The CDC reports that in a survey conducted among high school students in 2012 and 2013, 14.8 percent claimed to have been bullied online within the last year. The consequences of cyberbullying are real and devastating — research has shown bullying to be a major factor in teen suicide — which is precisely why 15-year-old Trisha Prabhu decided to take action: The teen created an app to prevent cyberbullying, called “ReThink.” The “ReThink” app relies on a surprisingly simple premise: That when you make people really think about what they’re saying, they’re less likely to be assh*les.

Prabhu was inspired to do something to combat online bullying two years ago when she read about an 11-year-old girl in Florida who killed herself after being cyberbullied. In a talk for TEDxTeen given last year, Prabhu explained that she was dissatisfied with the usual methods provided by social media platforms to stop harassment. Social media sites usually rely on a “Stop, Block, Tell method,” which requires users to stop what they’re doing, block the offensive person, and then tell someone what happened. This method is problematic, first, because the majority of teens don’t report being bullied, and, second, because it only stops the harassment after the victim has already been bullied. Prabhu’s program, in contrast, aims to stop bullying at the source, before the bully posts harassing messages.

The ReThink app is simple: The program detects when a user types something potentially offensive, and asks in a pop-up window, “Are you sure you want to post this message?”

Prabhu’s research has shown that, when they’re forced to rethink what they’re doing, bullies change their minds about sending an offensive message 93 percent of the time. In the TEDx talk, Prabhu explains that she was inspired by something she read during her research, which said, “The adolescent brain is likened to a car with no brakes. High speed, no pausing, no thinking, no considering. We just act.” She suggests that because teenagers’ brains are still developing, they sometimes lack the ability to fully think through their decisions before they make them. The ReThink app forces them to take a moment and consider their actions, long enough for many to realize that sending offensive messages is a bad idea.

Prabhu has garnered praise for her work: The Illinois student was a global finalist in Google’s Science Fair last year and participated this year in the White House Science Fair. Learn how to get the ReThink app by visiting the product’s website, and find out more about Trisha Prabhu here.

More like this
25 Galentine's Day Games To Play On Zoom With Your Long-Distance Besties
By Mia Mercado
Everything You Need To Know About The Samsung Galaxy S23 Ultra’s New Camera
By Alexis Morillo
Samsung's New Phones Have Amazing Cameras & Come In 8 New Colors
By Alexis Morillo
Ashamed Of Your Screen Time Stats? Here's How To Change That
By Alexis Morillo
Get Even More From Bustle — Sign Up For The Newsletter
From hair trends to relationship advice, our daily newsletter has everything you need to sound like a person who’s on TikTok, even if you aren’t.