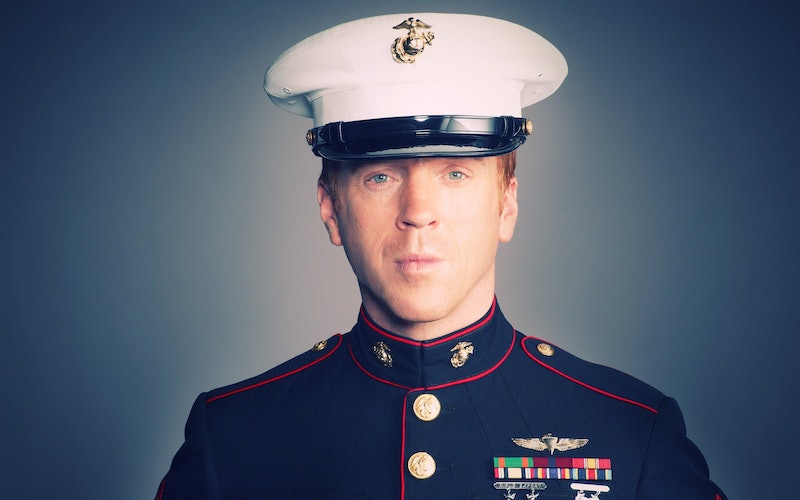 This is the way Homeland Season 3 ends: not with a bang, but a whimper. Okay, there were some bangs, too. Either way, after last night's episode "The Star," I'm calling it: Homeland is officially dead in the water. SPOILER ALERT/ TRIGGER WARNING FOR WHEN GOOD SHOWS DIE: Nicholas Brody, played by Damian Lewis, the Marine-POW-lamprey-mouthed love of Carrie Mathison's life, died. He is dead now, publicly executed in the square, hanged by a crane. Am I relieved? Am I horrified? I am both relieved and horrified, like when I eat a bagel at three in the morning and don't feel like dying when the sun comes up.

What does this mean for Homeland? In my opinion, I am done with the show, but I seem to be one of the only ones who is going to miss Brody. Sure, the "romance" between Carrie and Brody was melodramatic yet somehow devoid of all passion and chemistry — the only couple on TV that makes less sense is Olivia Pope and Fitz on Scandal. The plot-twists that plagued Homeland all seemed to spring from an embarrassing desire on the show's part to promise someday that Carrie and Brody would live happily ever after, apparently with their child (hella therapy in store for that kid).

But did they have to HANG HIM? Yes, Damian Lewis' mouth is unreasonably small for his face. Apart from that, though, the British actor's work on Homeland gave the show a vigor and energy that I don't think can easily be replaced by the other characters, despite the fact that his plot was trivialized to his daytime-soap relationship with Carrie. We may have Javadi, who is dark, terrifying and unpredictable the way that Brody was during Season 1, but that's not enough.

A lot of critics disagree with me, though, and are hailing the choice to kill Brody a wise one that will open doors for Homeland. Take Andrew Romano in his review at The Daily Beast:

Now that Brody's story has come to a close, this is the show that Homeland should be: a precise, plot-driven exploration of 21st-century intelligence gathering in the explosive, enigmatic Middle East, with a formidable antagonist to contend with. As Javadi tells Carrie—perhaps foreshadowing Season 4—“You misunderstand me. I think you of all people would understand that no one is just one thing.”

That's optimistic, don't you think? Scrapped is the gratuitous love affair of CaBrody (the best portmanteau I could come up with), but Brody's death just seems like a desperate move to erase the all bang, no buck plot twists of Season 3. Their affair needed to die—but Brody certainly didn't.

There had to have been a way to keep him around as something other than Carrie's boy toy. I am in the minority here, I know, but I'll miss his non-Carrie related hijinks, especially the complex portrait he painted of men who go to war in the Internet age. Damian Lewis summed up why I'll miss Brody so much — because of the depth of his character:

I loved doing “Homeland,” I loved playing Brody. I’m extremely proud of who we all created together. I think he’s a tragic hero for our time. He himself embodies a cautionary tale, going right back to the beginning, about sending young men to war and the damage it can do. He had brief moments of happiness and glory, but was essentially a very unhappy figure for three years. I enjoyed playing him, but I never expected him to last this long.

I'll miss you, Damian Lewis. Maybe we'll see you on Downton Abbey? But knowing them, they'd probably kill you off, too.