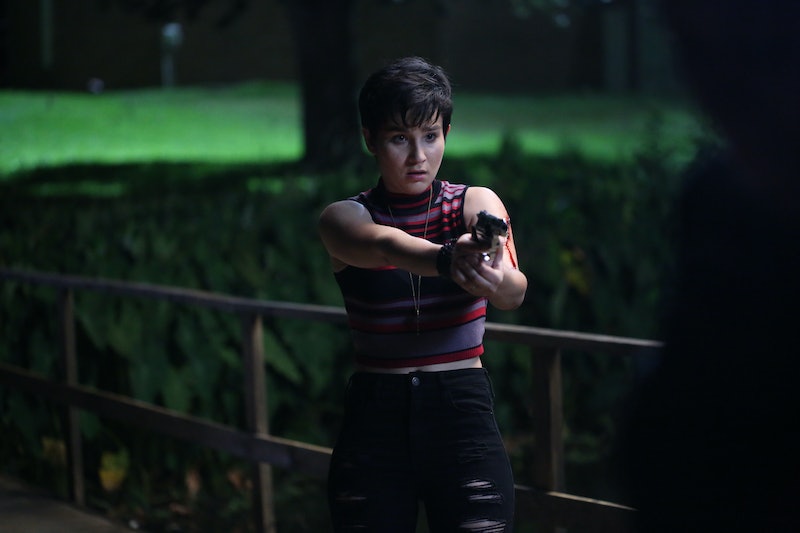 If you've been watching MTV's Scream since the beginning, then congratulations: you've made it out alive. The same can't be said for many of the residents of Lakewood, of course, as the show's cast was slashed in half by the time the finale "Revelations" rolled in. After 10 twisted episodes, fans learned that the Scream killer is none other than podcaster Piper, who also happens to be the daughter of Brandon and Emma's mother Maggie. However, contrary to popular belief, that actually wasn't the biggest shock of the episode — no, the biggest shock of "Revelations" was what happened after Piper was revealed: It looks like Emma's BFF Audrey is involved with the killer. Exactly how she's connected to Piper is the mystery we'll need to untangle in Season 2, but the revelation is enough to keep me guessing until new episodes premiere.

But, is Audrey really a villain? I'm not so sure.

Audrey's reveal comes on the heels of her big rescue: right as Piper was going to slash Emma, Audrey shoots Piper, knocking her into the water and saving Emma and Maggie from a certain death. Audrey's actions were certainly heroic, but also a tad puzzling — as Audrey herself should have been killed when someone in a Brandon James mask cornered her at Brooke's party. Audrey said she was attacked, but that she "blacked out" and woke up okay. That's suspicious in itself, but what we found out at the very end of the episode about Audrey will make you question everything you think you know about this fan favorite character.

Remember the final scene? After the dust had settled in Lakewood (and Noah had taken over Piper's podcast because killers probably shouldn't be allowed to run true crime podcasts) we saw Audrey in her room. She pulled out a photo of Brandon and a stack of letters, all sent to Audrey by Piper herself, then burned the letters with a cold, dead stare. So, could Audrey really be Piper's accomplice?

That's clearly what the show wants us to think, but I'm not totally sure that Audrey's connection to Piper is as nefarious as that final scene suggests.

The letters definitely look bad, but I'm not so sure that means Audrey has to be certifiably crazy and/or evil. The other explanation for those letters? Audrey was trying to help Piper find out who really killed the Lakewood kids when Brandon was accused all of those years ago. In fact, the note we see outside of the envelope suggests that Audrey and Piper were analyzing the scene from all of those years ago. Maybe Audrey was the one who contacted Piper in the first place about the Brandon crimes — reopening the Brandon case could have led to Piper's desire for vengeance against Emma and their mother.

If that's the case, it's not surprising that Audrey would want to burn any association she had with Piper — even if Audrey wasn't her big accomplice. Audrey tried to hide plenty of things that made her look guilty of the Lakewood murders, including the video of Audrey lashing out against Nina. At the end of the day, Audrey just doesn't seem like a murderer to me — there has to me more to the story than what we saw at the end of Scream's first season.

The other reason I'm not convinced that Audrey is our Big Bad? There's just no way that Scream is going to make it that easy for fans. Someone else has to be our villain next season, and I'm pretty sure that Audrey is another red herring.