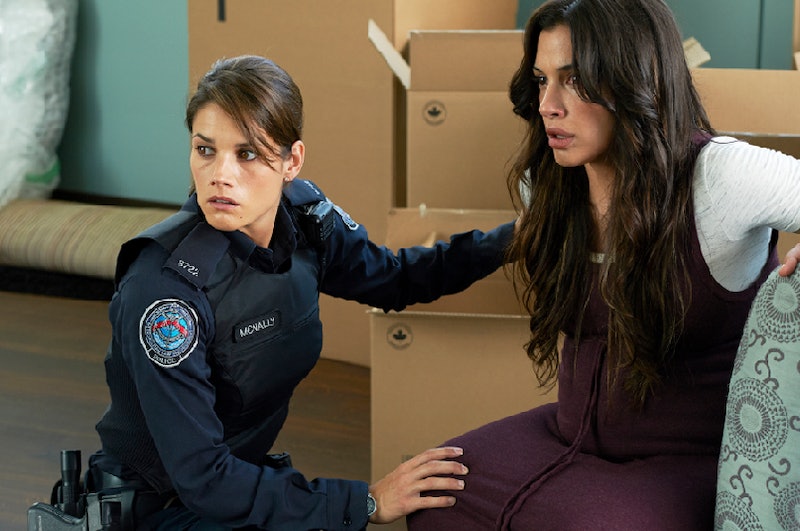 On Thursday night, the Season 6 finale of the Canadian-made police drama, Rookie Blue, will air on ABC. And, honestly, I'm wondering if the title should have been changed a few years ago to Very Experienced Police Officers, Thank You Very Much. The main event of the episode is the wedding of Missy Peregrym's Andy and Sam Swarek, played Ben Bass, which I'm sure will go off without a hitch, as every finale wedding ever has. (The question isn't if something will go wrong, but what?) But whether Rookie Blue closes out the year with a major twist in Sam and Andy's relationship, the ongoing corruption scandal, or any of the other officers' personal struggles, I just hope they don't do it with a cliffhanger. Mostly because Rookie Blue hasn't been renewed for Season 7 yet.

Of course, the series hasn't technically been canceled yet either, but a renewal is far from certain. Deadline reports that the show saw its lowest ratings ever in the 18-34 demographic with last week's episode, which was a 17% drop in audience from the week before. And Tassie Cameron — showrunner for all six seasons so far — stepped down after Season 6 was completed and handed the baton to writer Sherry White. Cameron spoke to the Hollywood Reporter in June about her confidence in her successor and in the Season 6 finale's dual purpose:

If the series had to end there it would be a strong ending. But if it gets renewed it gives us a really strong, clear slate to reboot and bring in new characters.

If Rookie Blue doesn't make it back for another season, ease your pain by following the journeys of these wet-behind-the-ears officers from other law enforcement dramas.

Before he vowed to clean up Gotham, Ben McKenzie learned the ropes in So-Cal as rookie LAPD cop Ben Sherman. Despite middling ratings and a network change, Southland survived five full seasons thanks to a passionate fanbase and critical acclaim for its gritty storytelling and realistic performances.

The baby of the Reagan brood, Jamie, trades a Harvard Law degree to join the family business of serving and protecting New York City. He is idealistic as he enters the force (Aren't they all?), but gets a serious education on gray areas when he's out on the streets. (Don't they all?)

Ruzek is well-intentioned, but cocky — luckily his partner Detective Olinsky can see through the attitude. And Officer Burgess certainly has no complaints. Their burgeoning romance has been one of the high points in Chicago P.D. so far.

Not exactly a rookie, Tully is still relatively inexperienced when the Charles Manson drama series kicks off because her more old-fashioned colleagues would rather see her at a desk job than out in the field. Fortunately, she's having none of that, and I'm hoping to see more of Charmain's boldness and quick thinking (though maybe a little more care) when the show returns for Season 2.

There's still a chance that fans haven't seen the last of Rookie Blue. But savor that finale, just in case.

More like this
Ava DuVernay Thought The 'Queen Sugar' Series Finale Felt “Really Satisfying”
By Brad Witter
Will 'The Walking Dead' Return For Season 12?
By Grace Wehniainen
'Gilmore Girls’ Lauren Graham Just Revived Our Hopes For A New Reunion
By El Hunt
Patrick Dempsey Explained Why Playing McDreamy Was Frustrating
By Grace Wehniainen
Get Even More From Bustle — Sign Up For The Newsletter