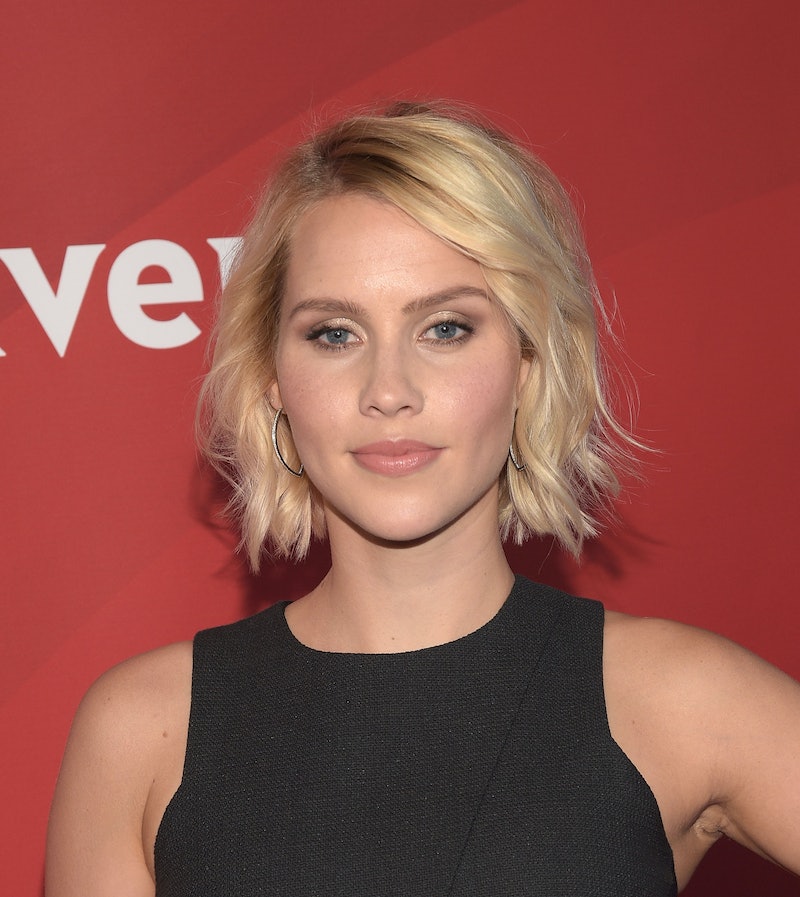 I was still making my way through my epic TV marathon when NBC announced that there would definitely be a second season of Aquarius, their historical drama/procedural hybrid. For a TV fan, there is no better feeling than going into a season finale secure in the fact that your show is returning — as secure as you can feel with a fictionalized Charles Manson lurking around, I mean. So, obviously, David Duchovny will be back as no-nonsense detective Sam Hodiak. And, how could the show continue without Gethin Anthony's Charlie? But, what about the rest of the Season 1 ensemble, particularly the green-but-learning, girl-in-a-boy's-club Officer Charmain Tully? Will Claire Holt be returning to Aquarius for Season 2?

Don't worry, everyone. Despite that scary cliffhanger her character gets in the finale, she's probably coming back. When the news broke on the Aquarius renewal, Holt retweeted several articles announcing the season order. And, if that weren't proof enough, she also shared a sweet and sleepy photo of herself on Instagram, with a caption about how thrilled she is that the show is continuing. It would be strange for her to be so invested in its renewal if she wasn't returning for Season 2, right? (Fingers and toes crossed!)

So if Clare Holt is really returning, that's great news considering the story was just cracking the surface of Charmain Tully. I get the feeling that Charmain is much more complex than she seems, certainly to the misogynistic jerks in her precinct, but also even to the audience. I'm ready to really delve into her character next time around. With that in mind, here are six things I'd like to see Charmain Tully do in Aquarius Season 2.

OK, so maybe this one can be solved by Holt's confirmation that she's still with the show. But, when we last left Charmain, she was traipsing undercover into a rogue mission, and it didn't look good. Don't you die on me, Tully! There's work to do.

2. Get A Partner Who She Can Trust

Charmain doesn't feel supported by her colleagues, but she's still determined to do her job. This leads to her striking out on her own and putting herself in danger. A cop is only as good as her back-up. And right now, Officer Tully has none.

While her male colleagues got to be shown at home with families and friends and lovers, Charmain seemed to live in the precinct. I think this was a well-intentioned choice, meant to make her job the main point of interest. But, we know her now, and expanding her universe beyond work will make her a more well-rounded character.

That little Meter Maid skirt-suit is cute, but hardly practical. Get this girl in some pants so she can really get things done.

Early on in the season, Charmain went undercover and charmed Manson with her pretty face and convincing hippie-girl howl. As the series goes on, I'd like to see her interact with him more. As similar as she is to them in age and beauty, Charmain is the only officer on the case who can identify so strongly with Manson's followers.

Unless Aquarius wants to sever all ties with history, Season 2 won't see Charmain leading a handcuffed Manson into a cell where he'll serve out the rest of his days. But, it would be nice to give her an opportunity to prove herself (again) on one of the show's satellite cases — a win that even her good old boys superiors can't deny.

Come back to Aquarius, Claire! I know you'll make me proud in Season 2.