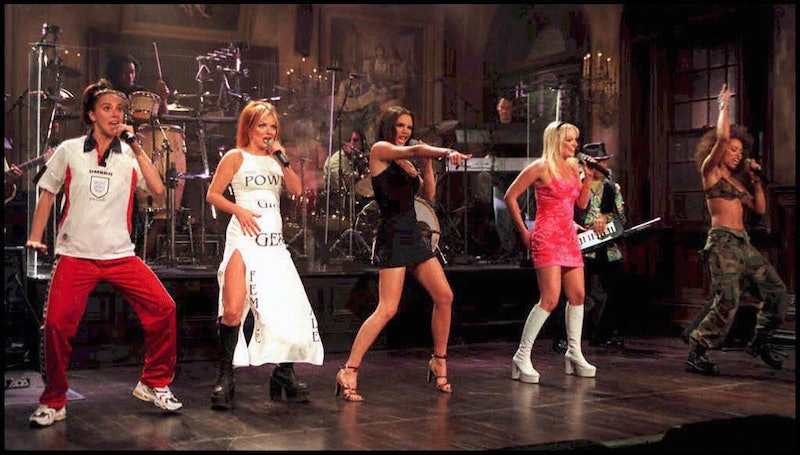 If you were a tween between the years of 1992 to 2004, then I'd be willing to wager fifteen canisters of Floam that you spent many a Saturday night watching SNICK, Nickelodeon's two-hour block of made-for-the-tweens programming. And I'd be willing to wager 15 more canisters of Floam that you'd agree that the shiniest jewel of the Saturday Night Nickelodeon crown was sketch comedy show All That. Over the course of its ten seasons, All That introduced audiences to iconic characters like Pierre Escargot and The Loud Librarian, was the launching pad for spinoff series like Kenan and Kel and The Amanda Show, gifted its audience with performances by some of the biggest musical acts of the ‘90s and early ‘00s, and taught me all about the second law of thermodynamics.

When the Spice Girls stopped by Nickelodeon Studios Orlando in 1997, they didn't just sing a song for the All That studio audience; Melanie Brown, Melanie Chisholm, Geri Halliwell, Victoria Beckham (née Adams), and Emma Bunton showed off their comedic chops in a sketch moments before performing "Spice Up Your Life." In the sketch, a young Amanda Bynes asks the Spice Girls to define the second law of thermodynamics (let this be a lesson: when given a once-in-a-lifetime opportunity, it's crucial that you make the most of it). Ginger Spice provides the following answer:

The second law of thermodynamics states that energy cannot be created or destroyed, just like the Spice Girls!

You hear that? Sure, Halliwell would go on to leave the group the following year, but that did not actually destroy the Spice Girls. Because the Spice Girls cannot be destroyed. Yeah, members may leave, and yeah, the Spice Girls may go on hiatus, but the group will viva forever.

Another important lesson: The one way to follow a Show And Tell presentation about ointment is to introduce your class to the Spice Girls.

And how do you follow a Spice Girls Show And Tell presentation?

You follow it up with a Spice Girls performance, zig-a-zig-duh.

More like this
22 Movies On Netflix That Are Perfect For The Whole Family
By Bustle Editors
Shakira Joked About An Early 2000s Video Of Her First Camera Phone Encounter
By Stephanie Topacio Long
Revisit 1992’s 'A League Of Their Own Cast' Photos After The New TV Series
By Grace Wehniainen
At 28, Lesley Manville Was Acting, Picketing, & Singing Kate Bush Songs
By Olivia-Anne Cleary
Get Even More From Bustle — Sign Up For The Newsletter