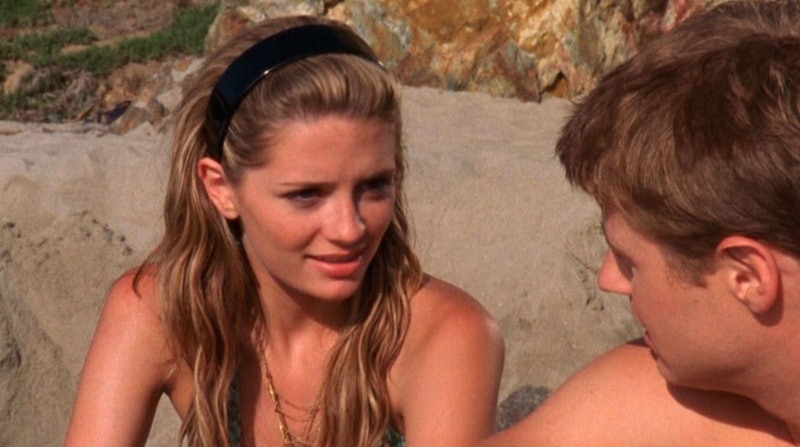 You might think that the bad boy from the "wrong side of the tracks" (or, rather, the San Bernardino County) would be the one causing all the trouble in Newport Beach, but on The O.C., it was none other than the "heartbreakingly beautiful" prom queen type who was causing most of the commotion. Ryan Atwood may have gotten in his fair share of fights over the years, but it was Marissa Cooper who was the real angsty teen of The O.C. Had one removed Marissa from the show, a whole lot less drama would have gone down — which, of course, was totally the best part of the show. You just can't keep a good train wreck down.

That's not to say that Marissa's troubled life was entirely without warrant. Despite her cushy upbringing, Marissa's teen years were wrought with drama... and not always drama of her own creation. After all, she didn't exactly plan for her father to steal millions away from Newport's wealthiest, or for her mother to sleep with her teenage ex-boyfriend. Marissa didn't exactly get educated at the school of hard knocks, but she did take a few metaphorical extension classes there.

Marissa's hard times definitely taught her one thing, and that was how to survive chaos. In fact, save for one very important moment (um, her death, may she rest in peace), Marissa was the ultimate survivor in situations big and small — and now she can help you do the same, posthumously. Here are some Marissa quotes to help you through any situation:

1. When You're Trying To Comfort Yourself When Your Tinder Date Is An Hour Late

OK, so in the back of your mind you know he's not coming. But hey, a little hope never hurt, right?

2. When Your Mom Asks If You're Really OK With Just Eating A Roll Of Cookie Dough For Dinner

One of the few great things about being an adult is giving yourself the okay to have dessert for dinner. So back. Off.

3. When Your Wi-Fi Goes Out And You're Streaming The Final Episode Of Orange Is The New Black

Because "ughhhh" doesn't even begin to cover your feelings.

4. When You Call Your Ex Crying... Again

You just had one too many glasses of wine and now can't stop asking them what went wrong in your relationship. That's all.

5. When Your Parent's Friend Says They Can Get You An Interview At Your Dream Company

You're trying not to seem overeager, but yay! For once, nepotism is working in your favor!

6. When Your Friend Is Pissed That You Ate The Last Slice Of Pizza

If your friend wanted another slice so badly, they should have sprung for a second pie like you suggested.

7. When Your BFF Is Too Hungover To Go To Brunch

You're totally winning the friendship game with this one.

8. When Your Friend Asks You If Her Pepto-Colored Bridesmaids Dresses Are OK

Yeah... like maybe a dress you can wear again, instead of using as fuel for your next bonfire?

9. When Your Friend Complains That All The Drinks In This Bar Are Way Overpriced

And that is why you carry around a big bag.

Let Marissa solve all of your life problems... she had some good problem-solving skills, I promise.