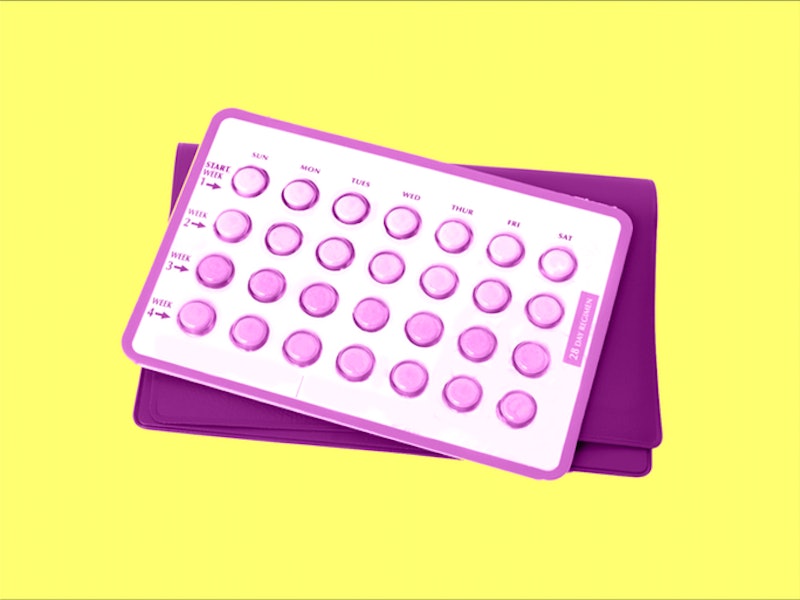 The most common use of contraceptives — the Pill, IUDs, vaginal rings — is, understandably, birth control. That is what they're designed for, after all. The Guttmacher Institute estimates that 16 percent of all women in the U.S. are on the Pill, and a further 10.4 percent are using IUDs, implants, or vaginal rings. That's a huge slice of the female population that has moved beyond the condom. But what does hormonal birth control do to the body? The answers go far beyond the prevention of baby-making — and it turns out that contraceptive use has some pretty astounding health benefits, (though of course, there are risks to taking hormonal birth control that everyone should be aware of as well, but that's another article).

These benefits are actually mostly classified as side effects, but that's not entirely accurate: birth control can be, and is, prescribed for things entirely unrelated to birth control. You'll know this if you have painful or irregular periods, as one of the first steps doctors often take is to place you on the Pill to see if it regulates your hormones.

After reading this, you may feel like going to your bathroom cabinet and giving your pill a slow clap. It's doing a lot more for you than it looks like. Birth control: the under-appreciated warrior in the war of women's health.

This is the big one. Oral contraceptives like the Pill have been linked to a massive reduction in the risk of ovarian cancer — by one estimation, one to five years on hormonal birth control will cut the likelihood of developing it by 40 percent, while 12 years will slash it down by 70 percent.

By radically reducing the number of times you ovulate, you're probably avoiding triggering the reactions in the body that would stimulate cancer of the ovaries. It's a hormonal suppression mechanism — but it doesn't work for all aspects of the body; your risk of developing breast cancer actually heightens slightly for the first few years on the Pill, though it drops down again afterwards.

Studies indicate that women on a longer course of hormonal birth control have a lower risk of developing anaemia, a condition of iron deficiency that involves a low red blood cell count. The reasoning is actually pretty simple: because the Pill means much less blood flow over a period, the body loses less blood overall, which is better for preserving a higher red blood cell count and preventing a descent into anaemia.

If you've ever been on the Pill, I know this one isn't so surprising: Hormonal IUDs, implants, and the Pill have been proven to reduce serious heavy blood flow in monthly menstrual cycles. In one study, having an IUD reduced blood flow by 86 percent in the first three months. Provided the bleeding isn't being caused by an underlying health issue, the synthetic progesterone in hormone contraceptives thins out the lining of the uterus, so that when it sheds it causes less blood flow.

If you were an acne-prone teenager you'll be aware of this already. The oestrogen in hormonal birth control pills is meant to help regulate the body's hormonal patterns, which then has a positive effect on hormonal acne. Studies have shown that the effects are concentrated on very specific kinds of oral contraceptive, mostly those containing cyproterone acetate, a kind of hormone dampener. So don't go hoping that whatever pill you're on will suddenly cause any pimples to disappear out of hand.

5. Lower Cervical Cancer Risk (If You Have An IUD)

This is an interesting one that depends on the type of birth control you have or take. While the Pill seems to briefly raise the risk of cervical cancer, those women who have an IUD implanted seem to slash their risk of cervical cancer by 54 percent compared to those who didn't. It doesn't seem that IUDs actually prevent HPV infections, which are linked to the production of cervical cancer; it looks more likely that having an IUD actually prevents the HPV from developing into a cancer. (It also seems that the Pill is good at protection against womb and bowel cancer, which yikes, are apparently things that exist.)

Endometriosis is a painful condition that can reduce a woman's fertility. It basically means that the uterine lining cells also grow outside the uterus itself, on other organs, and also shed every month, which is very unhelpful and often very painful. Hormonal birth control is part of a gamut of hormone-based treatment options for endometriosis, aimed at reducing the spread of uterine tissue, stopping the tissue sticking together, and helping reduce the risk of infertility.

Uterine fibroids are benign growths in the uterus that tend to appear when we're in our prime fertile years. They're not a massive problem and rarely develop into anything more serious, but they're also unpleasant and tend to cause heavy bleeding and pain. Taking the Pill means that the fibroids don't grow, and, as we've seen, they also help control heavy bleeding. If you have an IUD and fibroids, you may actually be more likely to shed your device, but it can also help control the bleeding. It won't help shrink or reduce the fibroids themselves, though.