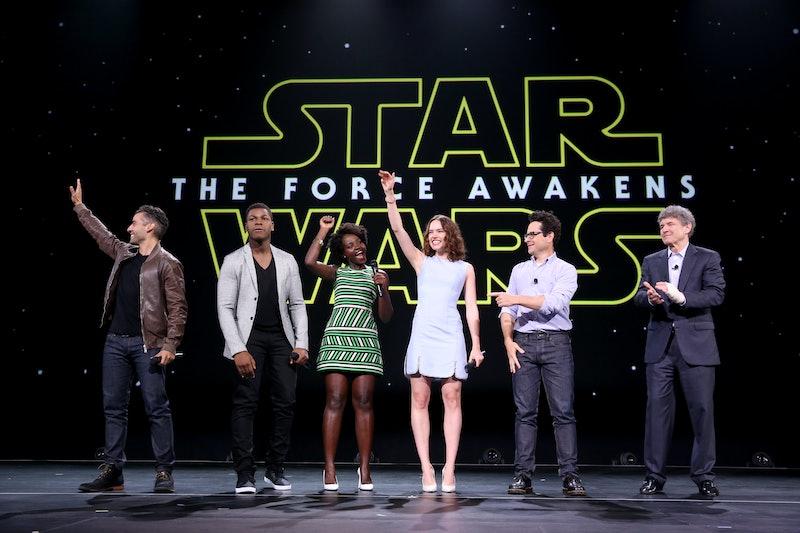 Quick! Without looking at your calendar, tell me what holiday falls on Sept. 4! It isn't Labor Day, so don't stress out if you're still wearing white. No, it's Force Friday! Hooray! But wait, hold up a second... what is Force Friday? If you're currently finding yourself wondering exactly this, don't fret — you are not alone, my friend, because I just went through exactly the same questioning in my own head. It turns out, Force Friday is a brand new holiday created to celebrate the release of new Star Wars merchandise for Star Wars Episode VII: The Force Awakens , the seventh film in the major franchise, which is due out on Dec. 18. That's a pretty long time from now, obviously, so to keep us all perched jauntily at the edge of our seats until then, Disney came up with Force Friday as a fun way to tide us over.

The idea is that Sept. 4 will serve as a set start to the buying season, with toys based on characters and themes in Star Wars: The Force Awakens being unveiled during a "global live toy unboxing event." It's an enormous rollout — essentially like a pre-Christmas morning reveal that will show kids and toy-minded adults all over the world what kind of merchandise they should be asking for and expecting under their trees this year. It's a super big deal, a lot of people are really excited.

But, of course, Force Friday is so much more than a holiday meant to mark the release of new merchandise — it's also all of these things:

So yeah, Force Friday — kind of a big deal.

Have fun and be safe, and most of all — you know what I'm gonna say — may the Force Friday be with you.