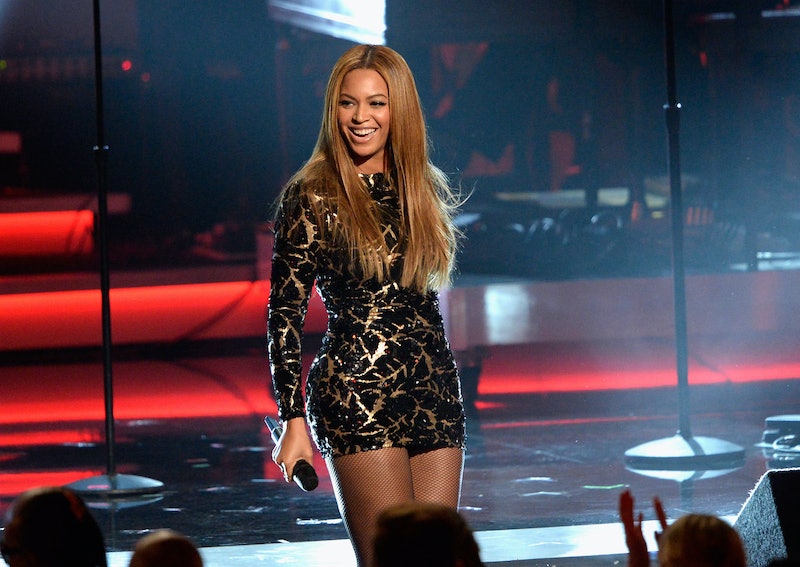 She scored the magazine cover everyone wants when Beyoncé became Vogue's September girl, but she's probably the only star on the planet who has the option of telling Anna Wintour that she plans on doing things her way. While others would give their right arms to appear on the cover of the biggest issue of the year, Bey was like, yeah, you can snap gorgeous photos of me wearing fall's hottest trends, but I'm not going to answer a single doggone question in the article written about me. And so there you have it, folks. It's been two years since Beyoncé has given an interview and no one should hold their breath in the hopes of discovering what she's been thinking this entire time. Not that Bey owes that to anyone.

Pulitzer prize winner Margo Jefferson penned an essay about the star for Vogue's September issue, but explained to the New York Times that Beyoncé chose to remain silent:

It was definitely posed to me as … call it a think piece if you want. I had no contact with her camp ... She has to be studying how effective her interviews have been so far. She may have decided that they do not contribute as dazzlingly to the portrait of Beyoncé as the other stuff. It’s a perfectly reasonable decision.

You have to admit, it's not easy to be a celebrity in this day and age. One slip up and your entire image is shattered. Fail to come up with an impressive enough response about a pressing social issue and half of your fans turn on you. Celebs born with extraordinary vocal ranges are also expected to be perfect role models and even vehicles for social change. Salon makes a valid point when suggesting that stars like Beyoncé shouldn't abuse the "hard-won privilege" they have to remain silent on issues like racism, because those issues are altering life for the very fans that make their successful careers possible.

But celebs are no different than anyone else. Some are strong, effective speakers who can sway a crowd with a few good words. Others simply aren't, no matter how intense they may or may not feel about the topic at hand. For whatever reason, at this time, Bey doesn't feel the need to elucidate her thoughts. Maybe she prefers to live her life and be the change — for her daughter, her fans, and her BeyGOOD Foundation in Haiti. Perhaps her Twitter and Instagram are all the interviews she wants to give until she finds the words to say more:

Beyoncé's last interview was with Oprah Winfrey in 2013. She spoke about her daughter, Blue Ivy, her husband, Jay Z, her miscarriage, and letting go of her father as her manager. It wasn't hard-hitting and it didn't delve into Beyoncé's secrets or her thoughts on social issues. And maybe that's all she's got — for now. Can't the world accept that she may simply be an amazing artist and influence who wishes to retain a sliver of mystery in a world in which many people feel the need to share what they're eating for breakfast, lunch, and dinner? To use Jefferson's words, that'd be a "perfectly reasonable decision," too.