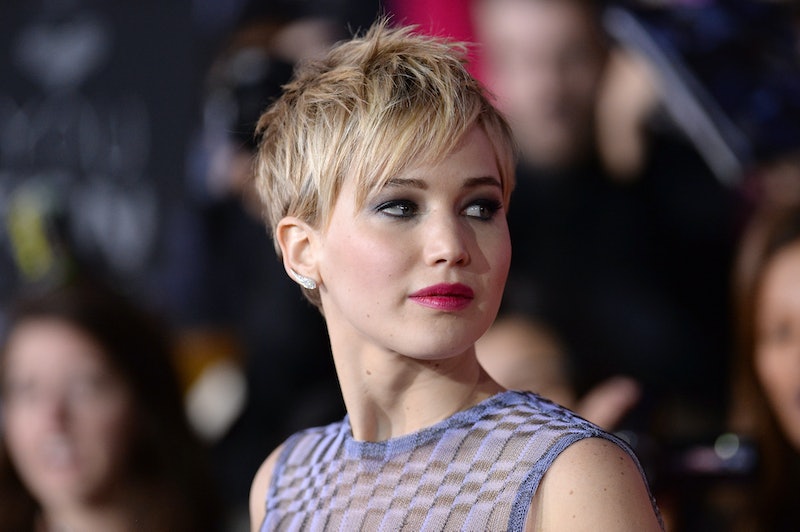 In 2011, Jennifer Lawrence covered Flare magazine and you probably didn't hear about it. You probably did hear about it last week, though, when the actress' two-year-old cover shoot made headlines thanks to a popular Flare GIF that highlighted Lawrence's (ultra-unnecessary) photoshopping. (Scroll down to see the GIF in question.) It might just be the biggest magazine cover photoshop "scandal" since the Faith Hill/ Redbook debacle. (Yes, I know that's a very specific title to bestow, but sadly, Faith and Jen aren't the only members of this club.)

The most interesting part of this story isn't that a fashion magazine photoshopped an already-lovely actress. It's not surprising that feminist media and Internet commenters are outraged over the photoshopping of Jennifer Lawrence; it's that Jennifer Lawrence isn't upset. Or, rather, she wasn't.

Lawrence has a complicated history with representations of women in the media, and specifically with representations of herself. In 2012, Lawrence was the subject of fan and media scrutiny when she was cast as starving District 12 resident Katniss Everdeen. She laughed off the claims that she was too "fat," "big-boned," or (best euphemism of all) "womanly" to play the District 12 tribute.

Then, at last year's Academy Awards, as Lawrence was making her amazingly affable red carpet rounds (you know, doing things like asking reporters if there was food at the show and gushing about her love of french fries), she spilled some Photoshop love to E!. A reporter showed Lawrence the images from her Dior campaign, which she claimed not to have seen yet. When he complimented her on her awesome gorgeousness, she shrugged it off and gave the credit (and praise) to the magic of Photoshop.

Oh my God, I haven't seen these. That doesn't look like me at all! I love Photoshop more than anything in the world.

When the reporter tried to insist that it was Lawrence's natural beauty coming through, she insisted again that it was a result of computer magic.

Of course it's Photoshop. People don't look like that.

You're right, Jen. Real people don't look like that. It's hard to say for sure what Jennifer's intention was in this sound bite. At the time, news outlets (or at least E!) spun the quip as another Jen's refreshing moments of honesty, but it's easy to hope that the comment was more than a little tongue-in-cheek (watch the moment below for yourself to decide).

Even if the Oscar Photoshop lovefest was a moment of Jen being Jen, her tune has changed over the course of the year, since she appeared on a magazine cover that actually relocated her collarbone:

In a November Q&A with Yahoo!, Lawrence took part in her first celebrity feud when she called out E!'s (yep, them again) Joan River's vehicle Fashion Police and the media in general for creating unrealistic role models for young girls. Take it away, Jen:

The world has this idea that if you don't look like an airbrushed perfect model. You have to see past it. You look how you look, you have to be comfortable. What are you going to do? Be hungry every single day to make other people happy? That's just dumb. There are shows like The Fashion Police that are just showing these generations of young people to judge people based on all the wrong values and that it's OK to point at people and call them ugly or fat. They call it "fun" and they say "welcome to the real world" — and that shouldn't be the real world, it's going to continue being the real world if we keep it that way. We have to stop treating each other like that and stop calling each other fat.

Words of wisdom, to be sure, but a total 180 for the girl who just a few months earlier, gushed about the virtues of Photoshop. Now, if you still want Jennifer Lawrence to be your BFF (hey, there's a lot of talk of the impending Jennipocalypse), it's probably easier to believe that she was just kidding with E! (and us… and her young, impressionable fan base) when she made her quips at the Oscars. And if she wasn't, it's only because she was delirious from the hunger she kept talking about all night.

But personally, I prefer the version of events in which Jennifer Lawrence really meant that she loves Photoshop more than anything in the world, in spite of the criticisms she had already faced in her own career. I like the version of the story in which the 22-year-old Lawrence thought one thing (or thought she thought one thing because she hadn't really thought about it yet… read it again, I promise it makes sense) and then, by 23, she'd reconsidered and given the issue some real thought and decided that she thinks something else. To me, that's the charming frankness of J-Law at work.

If we're going to believe that Jennifer Lawrence is our blunt goddess BFF, then let's take her at her Academy Awards word. But let's also keep asking her about this and letting her say amazing, thoughtful things to her young, largely female, fans. It's great that she can make shitting her pants more charming than Al Roker, but it's kind of awesome to see her effortless way with words tackle something a little more substantial.