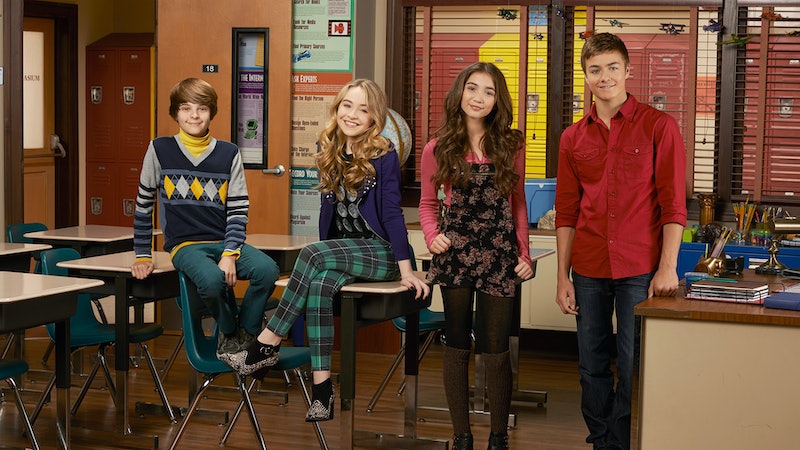 It's not often that television offers up "very special episodes" anymore, but Girl Meets World is breaking out the old moniker for the very best reason. In the Friday, Sept. 11 episode of Girl Meets World, Farkle thinks he has Asperger's Syndrome. Asperger's Syndrome (or as it was recently redefined, high-functioning autism) is a form of autism, falling on a spectrum that the Autism Society reports includes more than 3.5 million Americans today. This is a hugely important topic for Girl Meets World to take on, and the commitment to the storyline is shown by their focus on a major character.

Farkle is the son of Stuart Minkus (Lee Norris) and Jennifer Bassett Minkus (Kristanna Loken), and both characters will appear in the episode to support their son (Boy Meets World fans know both Minkus and Jennifer were in the original Boy Meets World, although their characters never interacted on that show). In fact, Farkle's entire friends group will research Asperger's in order to better support their friend if his suspicions turn out to be true. The episode is set to be about acceptance, compassion, and a willingness to embrace and understand the things that make people different.

Disney seems committed to getting this story right on every level. TV By The Numbers shared the official press release for the episode, which reveals Disney brought in three top specialists to consult on the episode. Given how rare it is for Girl Meets World to tackle issues this heavy, it shows a great amount of foresight for the show to take care in how they tell this story given the potential impact it could have on the audience.

Girl Meets World isn't the first show to take on the topic of Asperger's Syndrome, but it will be one of the rare shows to talk about it openly. Many fans have long believed The Big Bang Theory's Sheldon and Community's Abed are on the autism spectrum, but neither show has come right out and diagnosed the characters. Community came close several times, but when Britta tried to broach the subject, the rest of her friends cut her off as if saying Asperger's would somehow upset Abed. The best representation of a character dealing with Asperger's came from Parenthood 's Max. Max, who was slightly younger than Farkle is on Girl Meets World when Parenthood started, dealt with extreme bullying, therapy, finding his passions, and navigating a world that often felt foreign to him when it came to emotions. Ultimately, he found a way to communicate with his family and to make friends, even though nothing ever came easily to him socially.

Farkle is an ideal character to explore the subject of Asperger's with because so much of the first two seasons have been devoted to how aware Farkle is that he is different from his classmates. In Season 1, Farkle was more confident in his uniqueness, while Season 2 has consistently shown Farkle doubting himself. He recently began experimenting with how he dresses and acts in hopes of becoming more "normal," even though his friends love him for who he is. In one episode, Farkle is named "most likely to be Farkle" in the yearbook and he is still grappling with how his fellow classmates perceive him, even asking, "What is a Farkle?"

Even on a relatively bright and happy show like Girl Meets World, identity is a powerful topic. In retrospect, Girl Meets World has been laying the groundwork to tell this story for at least a season. Farkle is a beloved character and seeing him struggle to accept himself has surely only made him more relatable to young viewers. Seeing him face a potential life-altering diagnosis should make the subject of Asperger's something families can talk about and explore on their own. With so many people on the autism spectrum, I imagine that having a name to put on what makes you feel like an outsider can often be the first step toward finding a way to connect with people.

I hope Girl Meets World pulls this story off for its fanbase. Farkle is already a wonderful, bright, caring role model for tweens. Now he has a chance to share an important message about self-acceptance while also covering a disorder that so often goes unnamed in the media. Bravo to Disney for proving Girl Meets World is more than just a way to keep Boy Meets World alive — this show isn't just about nostalgia, it's about touching the lives of a whole new generation.