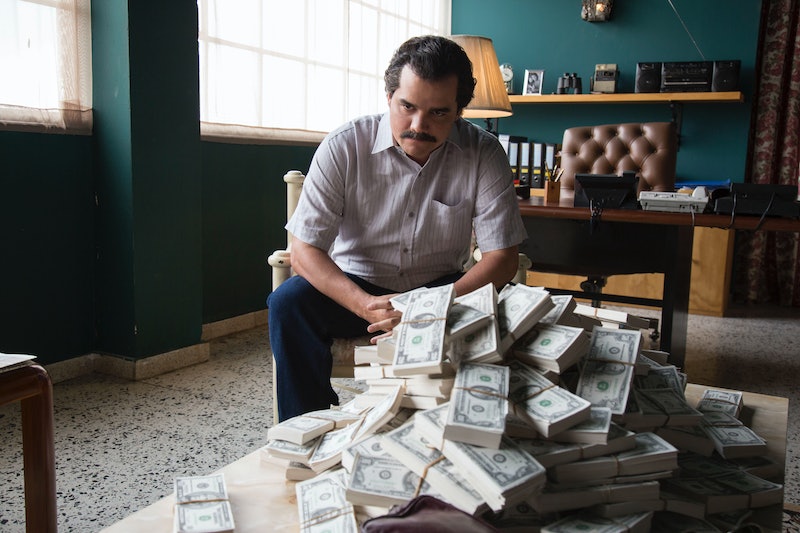 Maybe you've already finished all of Netflix's new original series, Narcos, or maybe you're saving it for another long weekend. Whatever the case, make sure it's on your to-watch list. A look at the real-life story of drug kingpin, Pablo Escobar, Narcos takes us into territory we haven't yet seen about Escobar's life. So, when all is said and done, is Narcos an accurate portrayal of Pablo Escobar, or really a better version of Vinnie Chase playing Escobar in Medellin?

That was an Entourage joke. And the last one here, because Narcos is leaps and bounds ahead of the fictional movie we saw made on the HBO show. Don't worry, if you're tuning in to Narcos for a little bit of history, the series delivers. According to outlets including The Guardian and Decider, many details in the show are true to life, though as with any series, some aspects have been heightened to add drama. A few names have been changed here and there to protect the characters' real life counterparts, but once again, that's a given when Netflix is striving for drama — and we are dealing with drug lords, after all.

In fact, some of the most far-fetched-seeming details are actually true. When it comes to Escobar, he did indeed gain the nickname "The Robin Hood of Medellin" for his charitable donations, which helped to build schools, sports fields, and housing developments for the low-income community. And per Digital Spy, he did work as a police officer before his rise to notoriety.

Furthermore, Javier Peña and Steve Murphy — the two DEA agents responsible for taking down Escobar — were brought in as consultants for the show (it's a fictional version of Murphy who narrates the series). But it's like when Hank was investigating drug kingpin Heisenberg (who was, unbeknownst to him, his brother-in-law Walter White) in Breaking Bad: he had some information, but he didn't know all of the facts. Overall, showrunner Eric Newman told The Hollywood Reporter in 2016 that Narcos is "50-50 when it comes to fiction and nonfiction," but that they stick to an accurate timeline of events.

However, some of Escobar's own family members have taken issue with the show's portrayal of him. Escobar's son, Sebastian Marroquin — who wrote a tell-all book about his father, Pablo Escobar: My Father, in 2014 — shared a lengthy Facebook post in 2016 calling the series "insulting" and detailing 28 supposed inaccuracies. The post is in Spanish, but according to The Telegraph, they range "from trivial matters of which local sports team Escobar supported in Medellín, to more substantial ones, including denying that Escobar attacked rival drug lord Gilberto Rodriquez's daughter at her wedding" or any of the Rodriguezes at the time.

Ultimately, as Newman himself said, Narcos is a mix of fact and fiction. If you're looking for a 100 percent accurate account of Escobar's life, you'd be better off reading a book about him, but as far as TV shows go, Narcos is a compelling — if partially fictional — account of a notorious figure's life.

This article was originally published on Sep. 8, 2015