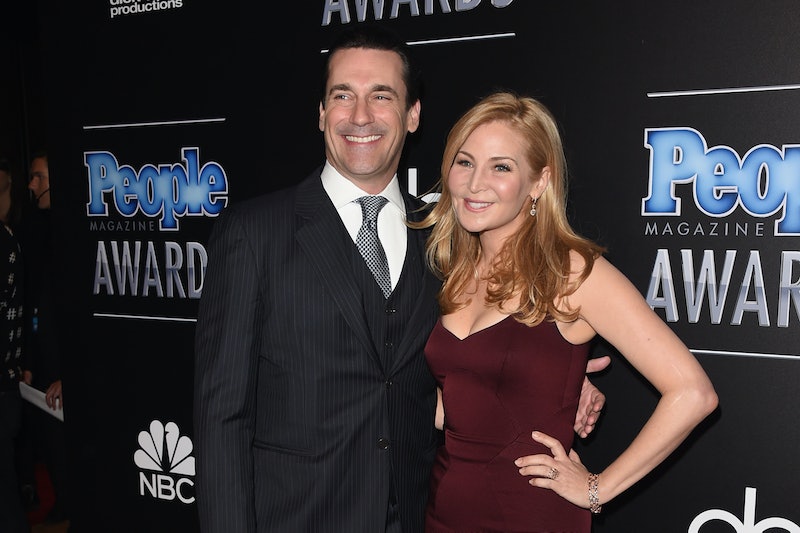 Hollywood has truly lost one of its great power couples today. In April 2009, Hamm and Westfeldt started their own production company, Point West Pictures. Together they produced Friends With Kids. Since then Hamm has wrapped up his iconic role as Don Draper on Mad Men while Westfeldt has guest starred on the HBO series Girls. The two were by each other's side through every career milestone, often appearing together on the red carpet looking flawless.

Let's take a look back at some of Hamm and Westfeldt's best photos. Even though they have broken up, the duo issued a statement to People saying they would "continue to be supportive of each other in every way possible moving forward." Hopefully that means Hamm and Westfeldt can transition from being a couple into being friends.

1. Hamm & Westfeldt At The Into The Woods Premiere

The two looked absolutely radiant at the 2014 premiere of Disney's Into the Woods. Hamm even donned a newsboy cap. This is just one of many, many red carpets these two walked together.

The couple always shined at the Emmys. Hamm never got a chance to take home a statuette for Mad Men while he and Westfeldt were together, so if he wins this year it will be extra bittersweet.

3. Goofing Around With Hamm's Wax Figure

Don Draper was immortalized as a wax figure at Madame Tussauds in New York City, and the couple were on hand for the unveiling. Look how proud of Westfeldt looks! These two were known for being a fun-loving couple and pics like this show off just how much fun they had together.

4. At A Vanity Fair Event

There was something strikingly old Hollywood about the couple, and this pic highlights their classic cool better than any other.

5. Together For A Mad Men Premiere

Seeing what Hamm and Westfeldt looked like on the red carpet for Mad Men each year was always a treat. The couple were always super affectionate with each other, and their outfits looked perfectly coordinated at all times.

6. The Duo Had Each Other's Backs

Hamm looks like he's either telling Westfeldt to finish her twirl or shaking a playful finger at a photographer. Either way he had Westfeldt's back in a way that only a couple who had spent nearly two decades together could.

The couple had a whole circle of famous friends, including Fallon, who they are seen here being all kinds of adorable with.

8. They Didn't Pass Up Photo Ops With Bradley Cooper Either

Even more celeb couple cuteness. Here they are with Bradley Cooper looking suave as ever.

9. Always By Each Other's Side

There was nothing these two didn't do together and that only makes their split all the sadder.

Here's hoping Hamm and Westfeldt can find a way to stay close. They've been together through hard times and happy ones. Even if their romantic relationship is over, I hope for their sake their friendship will survive.

More like this
Adam Levine & Behati Prinsloo Welcome Their Third Child Together
By Jake Viswanath
Meghan Trainor & Daryl Sabara Are Expecting Their Second Baby
By Jake Viswanath
Here’s What Happens To Bill & Frank In 'The Last Of Us' Video Game
By Brad Witter
Keke Palmer Shares The Sex Of Her & Darius Jackson's Baby
By Jake Viswanath
Get Even More From Bustle — Sign Up For The Newsletter
From hair trends to relationship advice, our daily newsletter has everything you need to sound like a person who’s on TikTok, even if you aren’t.