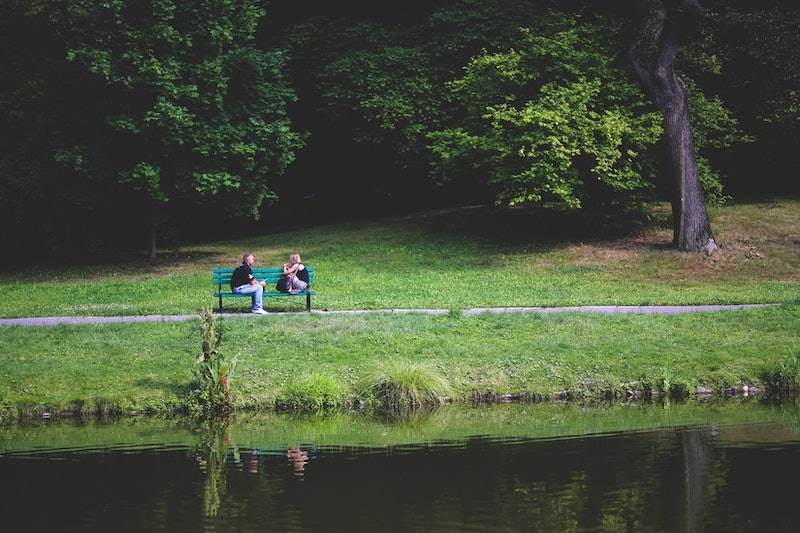 Everybody operates differently, and no two relationships are alike, so I can't really tell anyone what the best case scenario is for them post-breakup. Still, I see a lot of articles about why you should be friends with your ex or why you shouldn't be friends with your ex, as if they are the only two end results of a breakup. In fact, there is another logical, fairly inoffensive way to end things that might actually spare everyone a lot of trouble in the long run: be nothings with your ex.

Being nothings with someone is basically like predetermined, consensual, mutual ghosting. I'm not saying it's going to be easy. It's a breakup, and there's will never be anything easy about extricating your life from someone else's. In fact, I'd argue that becoming nothings with someone is more difficult in the immediately post-breakup than it would be to remain friends or become "not friends" with them — as long as you are harboring some kind of feeling, you get to keep them in your life, and by keeping them in your life you still haven't fully severed the cord. It is comforting to have someone familiar stay close, whether out of love or hate; truly letting them go, or becoming "nothings" with them, is pretty terrifying in the moment, like getting cast out at sea with nothing but a life vest.

But the truth is, once a relationship is over, it is sometimes healthier to let the person out of your life for good. There are exceptions, of course — some people can stay friends with their exes, and miraculously are able to not make each other feel uncomfortable or guilty when they move on to other people right in front of them. But on the flip side, I think sometimes people confuse "hating someone" or "not being friends with them anymore" as letting them go, when really that hate is actively keeping the person in your life, even when they are a thousand miles away. In that case, you need to step back and evaluate what kind of esteem you are still holding your ex in — and allow yourselves to be truly independent of each other, if you think that it will be healthier for you in the long run. Here are all the reasons to consider being "nothings" with your ex:

There Won't Be Any Bad Blood Between The Two Of You

Even if you stay friends post break up, there is an inevitable weirdness. Again, maybe there is some unicorn friendship that has triumphed over this weirdness, and a lot of people are able to work through it. But for most of us, watching a friend who used to be your person pick someone else to be their person is brutal, regardless of who ended the relationship. There is probably going to be bitterness and resentment, even if it goes unacknowledged for the sake of keeping up the friendship.

And if you decide to hate someone post-breakup, well, the source of the bad blood is already pretty clear. Either way there are ugly feelings between the two of you; sometimes the only way to get rid of the ugly feelings is by slowly and purposefully teaching yourself not to have any feelings about them at all.

There Won't Be Any Weird Passive Aggressive Encounters

When you become nothings with someone, your risk of running into them goes way down in the first place. You run out of excuses to see each other. There's no "oh, let's grab a drink after work" that turns into drunken mishap that you'll both regret; there's no "I have this box of relatively useless things to return to you" just so one of you can drag the other one back into your life. If you ever do run into each other, it will be friendly and mature, and there won't be any weird strings attached to it. When we broke up, an ex of mine and I discussed that we would like to be the kind of exes who wouldn't hide from each other if we happened to be in the same grocery store — who would exchange pleasantries, feel good about the encounter, and be able to walk away from it. I don't think we'd be able to do that if at some point we hadn't consciously decided to lose touch first.

You Are Less Inclined To "Check Up" On Them

Whether you decide to be friends or hate the person, you will feel compelled to check their social media, or worse — it'll just pop up in your newsfeed and be right up in your grill, impossible for you to ignore. There is a reason "win the breakup" was coined on Urban Dictionary. There is no rush quite like the instant one you get from snooping on someone's Instagram. But when you cut someone out of your life in a mutual, un-bitter way, you control what you see and what you don't. You don't unfriend them or unfollow them in some big indignant, attention-seeking rush; you simply mute them from your feed, and that's that. Nobody's feelings have to be hurt. Nobody has to measure their life using the other person's as a ruler.

There Truly Is A Fine Line Between Love And Hate

Actively hating someone is your brain's weird, twisted way of trying to cope with the fact that you still have residual feelings for them. It doesn't necessarily mean you still love them, but the fact that you are wasting the time and energy on hating them in the first place is not, in fact, the opposite of love. The opposite of love is nothing. It sounds bleak, but it doesn't have to be; in the end, releasing all of your feelings and just letting them go can be the peace that you truly need to move on. Which brings me to my next point ...

When you're nothings with someone, they stop being your baggage. I promised I wouldn't quote Taylor Swift in an article today, but I lied (again). Consider the song "Begin Again". She says in the bridge that as they walk to the car, she "almost brought him up," but then she decides not to — "And for the first time, what's past is past." Of course, you already knew that. But sometimes I think we need a reminder, because in the moment we don't realize just how much we are holding ourselves back, even in tiny interactions like those, when we are still hung up on an ex — be it in a friendship or in hatred.

You Can Be Genuinely Happy For Them When They Move On

When you're nothings with someone, you no longer have a stake in them. Nothing about their lives — nothing about what they decide to pursue, who they decide to be with, or how they choose to act — has anything to do with you anymore. You can objectively look at their life and be genuinely happy for their happiness, without thinking about what it cost you — and ultimately that becomes the key to letting yourself feel your own happiness independent of them as well.