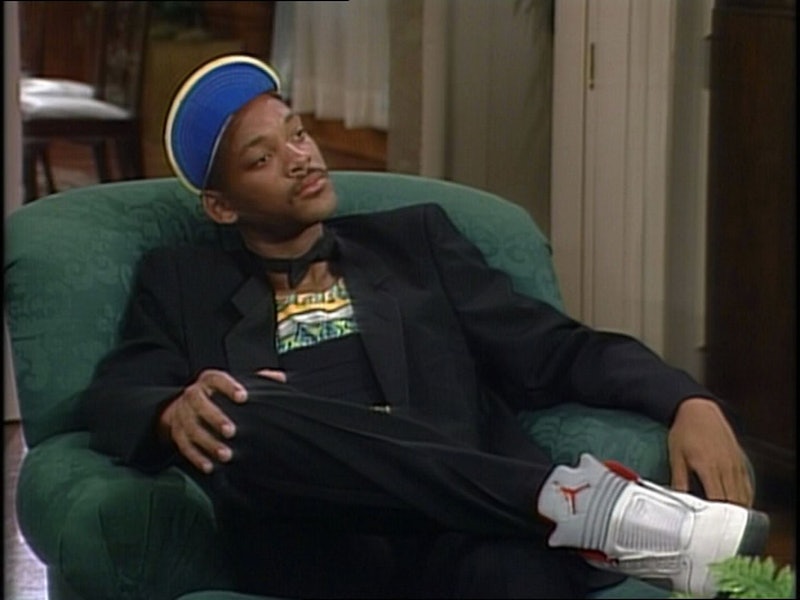 Does anyone quite believe that it's already been 25 years since the series premiere of the beloved series The Fresh Prince of Bel-Air ? Yup, that's right. Take that in for a second. In 25 years, so much has happened in the world that re-watching old episodes of Fresh Prince feels a bit dated. Granted, it's still ridiculously entertaining, but man, is it weird to see Will dance around with a radio/walkman or see Hilary not using her full fashion potential through social media and more. In fact it makes me wonder: What would The Fresh Prince of Bel-Air look like if it took place in 2015?

For one, a few things would change drastically, like the amount of time the Banks family would spend on their phones. Honestly can you even imagine Hilary with a smartphone and all of those apps? We probably wouldn't seen much of her throughout the series. And of course, a modernization of the series would give us more opportunities to address real issues facing the world today that maybe weren't as in the forefront in the early '90s when the show first premiered. But above all, the series would still feature an awesome family that valued love and strength and unity above all. So what specific changes would we expect from a Fresh Prince series set in 2015?

1. Hilary Would Be A Huge Fashion Star

Not only would Hilary still be a popular TV talk show star, she would also have the best fashion segment in her talk show and would become a famous fashion contributor all over the world on all different types of media. In fact, her Instagram would be world famous for fashion.

2. Uncle Phil Would Be Under More Careful Supervision

Full disclosure: I love Uncle Phil. But let's be honest, he isn't the most calm and understanding parent at times. If the show took place in 2015, he probably wouldn't be able to throw Jazz out on his butt as often as he did, and he would probably get in trouble with Aunt Viv over his blood pressure when he freaked out at Will. Let's just say we'd be hearing more terms like all-natural, organic, and even vegetarian and vegan.

3. The Dancing In The Banks Household Would Go Viral

Someone would have to eventually film the family and put it up on YouTube right? They would become Internet stars.

4. Ashley's Musical Talent Would Have Been Discovered Sooner

Once again, YouTube would play a huge role in the Bank family household. If Fresh Prince took place in 2015, Ashley would definitely post videos of her singing on YouTube and would have potentially gotten discovered for her talents sooner. Or maybe she'd even go on to do a singing competition series. You know Adam, Christina, Pharrell, and Blake would turn their chairs for her on The Voice.

5. Carlton Would Get A Lot Of Women

6. Will Would Get Shut Down By More Women

As smooth as Will is, he definitely didn't always say the most empowering and respectful things when it came to describing women. A strong personality like Will would probably get shut down by more women, despite the fact that, objectively, he's good-looking.

7. Geoffrey Would Go On To Bigger, Better Ventures

Geoffrey was always meant for greater achievements. Knowing him, he would have invested in some incredible stocks and sold at the right time for a huge payout. Perhaps he would start his own nonprofit, maybe he'd invest in Ashley's music career and any businesses she wanted to create. No matter what, modern-day Geoffrey would at least end the updated series with so much.

8. Everyone Would Be On Their Phones All The Time

Seriously. All the time.

9. The Conversation About Sex & Gender Would Be More Open

There were quite a few jokes about sex on the family show, but most were innuendos. The actual conversations about sex happened here and there, but an updated series for the modern age would be much more likely to address issues of sex and love and gender equality within those aspects more often. The conversation of when Ashley was ready to have sex would have gone a little differently to be sure.

Can't you just see it?

11. The Family Would Still Be Strong & United

They are the Banks family, after all. They're one of TV's best families, and it's all thanks to their undying love, no matter what ridiculous situations they were thrown into from week to week. No amount of updating and modernization would change this undeniable fact.