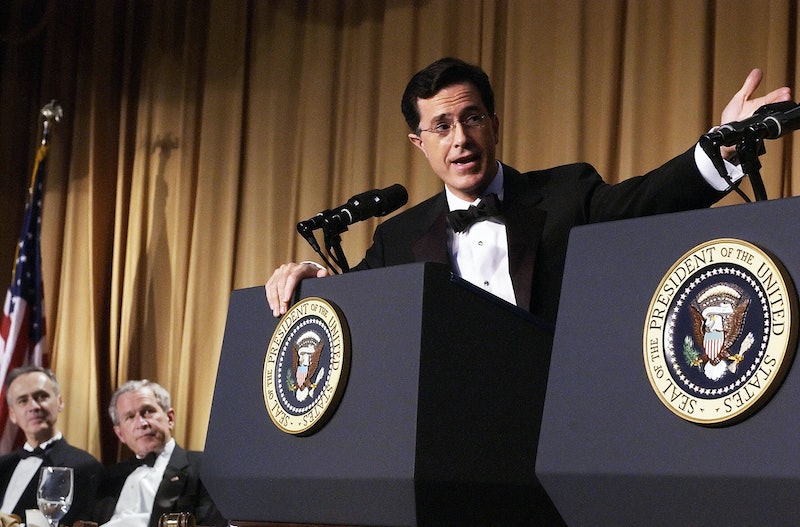 I'm certain that there are plenty of moments during his eight-year presidential tenure that George W. Bush would love to forget. Somewhere near the top of that list would likely be the comedic trouncing he got in 2006, when Stephen Colbert slammed him at the White House Correspondents Dinner. Presidents always receive perhaps more than their fair share of intense scrutiny via jokes, and another Bush is about to enter Colbert's politically whip-smart comic hand. Jeb Bush, presidential candidate and younger brother to George W., will be the first guest on the new Late Show hosted by Colbert on Tuesday. And Colbert is not likely to pull any punches.

Colbert will likely have plenty of fodder for his meeting with Bush, as he's recently fallen significantly in the polls in both Iowa and New Hampshire. According to Yahoo News, Bush now stands at only six percent in Iowa, and did not even make it into the top three in the polls in New Hampshire. (Trump leads, followed by John Kasich and then Dr. Ben Carson.) Colbert went after President Bush in 2006 for his 32 percent approval rating, saying that if you think of it as the glass being only 2/3 full, there is still liquid in the glass — but he wouldn't drink it, because the last third of a drink is "mostly backwash." So what will Colbert make of Bush's six-percent-full glass?

At the 2006 WHCD, Colbert mocked the disastrous situation in Iraq: "I believe the government that governs best is the government that governs least. And by these standards, we have set up a fabulous government in Iraq." Needless to say, President Bush didn't have much of a laugh at these jokes, though he did break a smile a couple of times throughout the routine. Colbert got a tiny chuckle out of him when he talked about First Lady Laura Bush, saying "And I just like the guy. He's a good Joe. Obviously loves his wife, calls her his better half. And polls show America agrees."

Jeb Bush's association with his president brother alone is probably enough for Colbert to work with. In the past, he's joked about President Bush's stance on the NSA and the environment, which remain very hot-button issues today. Now, he can joke about how Jeb differs (or doesn't) from his older brother. Thanks to Donald Trump, all Republican candidates are wide open to jokes that mock their inability to beat a former reality TV star in the polls; something I'd be surprised not to see on Tuesday evening.

Though what will certainly be very different this time around is that Colbert is no longer doing satire, as he did for years on the Colbert Report. Now, viewers and interviewees will be contending with a side of Colbert that we aren't really familiar with — a Colbert who is not in character as a silly, conservative pundit. Now we will get to see Colbert stick it to the man in a much more direct fashion, which the subjects of his jokes (i.e. his interview guests) might not find as humorous as they may have on The Colbert Report.

The jokes Colbert delivered in 2006 are still hilarious today, and Tuesday evening, we will find out if his interview with Jeb Bush will also end up being a classic.