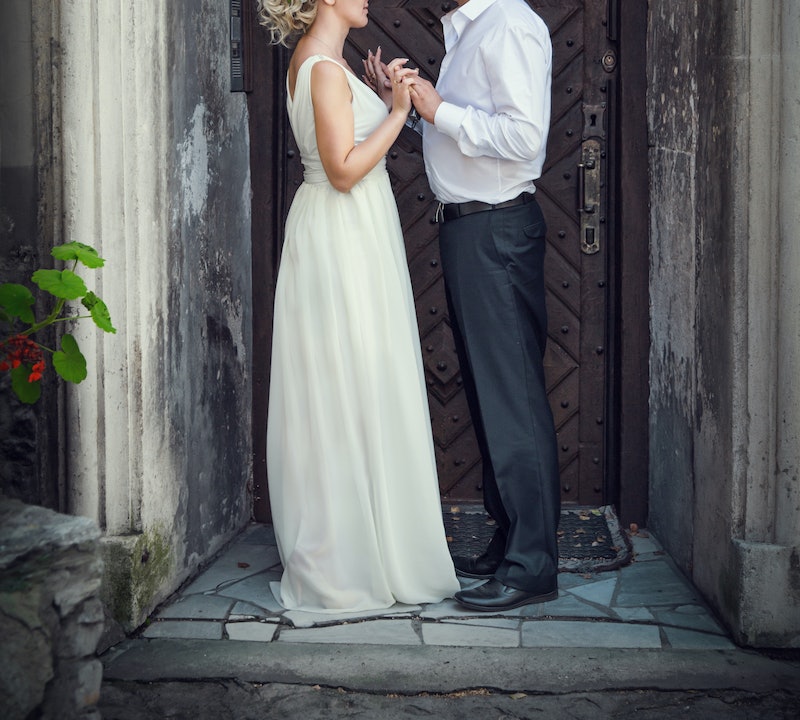 In my house growing up, it was understood that feminists do not change their names when they get married. Name changing was directly linked to the patriarchal system of treating women as property that was passed from her father to her husband and it was not something we did. My mother kept her name when my parents married in the late ‘80s, at a time when it was still a pretty radical move, radical enough that people messed up her name basically all the time. Little elementary-aged me would grit my teeth in frustration at letters addressed to my mother in my father’s name and would correct any teacher who referred to her as Mrs. McGowan. “Her last name is Watson,” I’d say with a glare. The patriarchy was no match for pint-sized Emma; let me tell you.

My parents also took what I think was a great approach to the dilemma of what do about the last names of their biological kids. I’m the firstborn and when I popped out, my mom told my dad that she didn’t care whose name I had. They ended up naming me Emma Watson McGowan, which puts my mom’s last name as my middle name. Then, when my mom got pregnant again, she realized that she’d be the sole Watson at McGowan family gatherings, a prospect that left her feeling daunted. She asked my dad if he’d be cool with switching the names with this new baby and he was all for it.

And then my brother was born. A boy. My parents went ahead with their plan and named him Evan McGowan Watson and everyone freaked the f*ck out. They were bombarded with questions like, “How will he identify with his father??” to which my mom curtly responded that she’d had a daughter two years ago who didn’t have her name and no one worried about me identifying with her. Discussion closed. Patriarchy vanquished. Boom.

These days, I still believe that I won’t change my name when I get married. It’s not something I’ve ever even considered and unless I marry a man to whom it's really important (unlikely, considering my politics), I don’t see it happening. However, one thing that age has given me is a sense of nuance. I now understand that while I might not like the idea of changing my name to match my husband’s, everyone’s approach to the to-change-or-not-to-change dilemma is totally personal. As I’ve gotten old enough that my peers have started getting married themselves, I’ve heard a bunch of really cool solutions to the name change dilemma. Here are just a few.

I actually wanted to take my husbands name but it was atypical in his culture. (He's from Spain.) On top of that, his last name is reeeaaaaallly long so it's actually a disadvantage for me to change it. The bad side of the deal is that my children will have a different last name than me. I want in the club, but culture and logistics say no.

I kept my name.

I kept my last name for business and branding purposes, and my husband hyphenated his to include mine.

I chose not to take my husband's last name. But I think having a hyphenated last name from birth made the decision slightly different from other people I spoke with and the decision about what to name the children we plan to have much more complicated

I'm not married yet but I will definitely keep my name when I do marry as I've already changed it from my father's to my mother's. My parents are happily married and I have a wonderful relationship with my Dad, but in High School it seemed like I was arbitrarily assigned my father's name at birth even when my mother chose not to change hers. I strongly identify with my mother and her sisters (all of whom kept their names when they married.) I will likely give my some of my children my name and some of them my future husband's, though of course that's a two person decision with someone I have yet to meet.

More like this
Why You're Seeing Green Bandanas At Abortion Rights Protests
By Lexi Inks
How To Fight For Reproductive Rights, Based On How Much Time You Have
By Courtney Young
5 Ways To Stand In Solidarity With Women In America From The UK
By Sophie McEvoy
How Getting An Abortion Has Changed From The ’60s Through Today
By Amanda Chatel
Get Even More From Bustle — Sign Up For The Newsletter