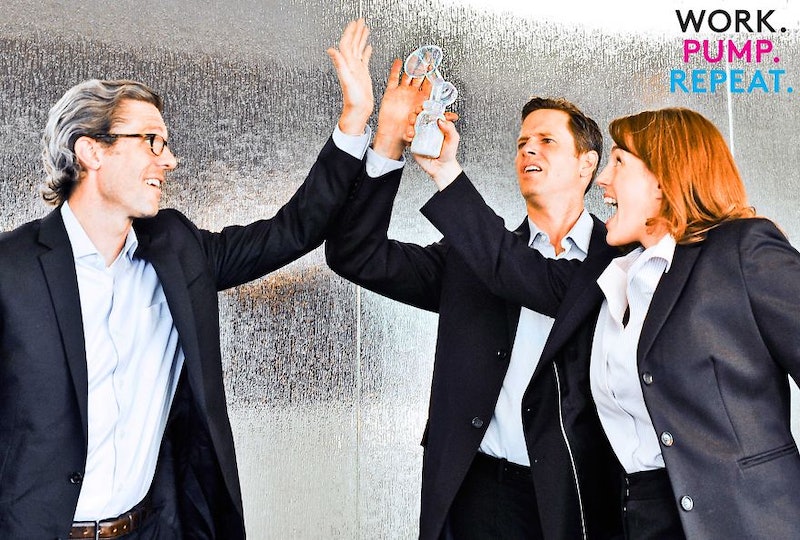 Jessica Shortall is no stranger to the difficulties of breastfeeding in the workplace. The mother of two spent five years serving as the Director of Giving for TOMS Shoes with pretty much the whole world as her office, and has now compiled the experiences that she and other mothers have had in corporate America in a hilarious and telling series of parody stock photos about breastfeeding at work. The photos bluntly depict the reality that working mothers face every day, giving a much more realistic alternative to the working mother stock photos that actually exist in the media right now. Shortall noted that most of the images we see as part of the "working mother" brand — even the more "progressive" ones — involve a woman sitting with her baby at a desk.

"This is so far from the reality of most working moms in America," Shortall wrote to Bustle. "For those of us who are breastfeeding when we go back to work, most are returning not with a baby but with a machine we must attach to our bodies multiple times during every shift. I've interviewed hundreds of working, breastfeeding moms for my book and their stories are funny, sad, awkward, inspiring, shocking, and very real. I wanted to show what working and breastfeeding in the corporate world truly looks like, because it gives women a sense of validation and solidarity, and to make a point: we are not doing right by new mothers who are working their butts off to do their jobs and make food for their babies. Assuming it's fine for a woman to make her baby's food in a public toilet is not OK. Putting a woman in working conditions that cause her to leak milk through her clothes is not OK."

The photos go beyond showing the typical, expected stressors of working motherhood, but also depict the occasionally unsupportive and insensitive environments that women face in the workplace as well. Be it nosy co-workers, dismissive bosses, or even getting relegated to supply closets or bathrooms in order to pump milk, the series shows the brutal, unglamorous (and occasionally hilarious) reality of the situation.

"I hope working moms get a sense that they're not alone in this — that their experiences are seen and shared and OK to talk about," Shortall wrote to Bustle. "I hope working people take away greater understanding and empathy for their co-workers who are breastfeeding and working. I hope people in the media starts to reconsider how — and why — they portray working mothers. And I really, really hope that these photos find their way into the hands of politicians who say they value motherhood and working mothers. The way that new, working mothers are treated in America sometimes borders on the inhumane, and a lot of that stems back to the lack of national, paid maternity leave in this country. It's even worse outside of the corporate world depicted in this photo series — my next goal is to shoot the realities of the waitress, the dog groomer, the cop, the postal worker, the nurse, and the teacher who face even greater — sometimes insurmountable — challenges in trying to feed their babies breastmilk."

The photos tie in with Shortall's book, "Work. Pump. Repeat.", which hit markets on September 8. The book is a no-judgment "survival guide" for new mothers who are going back to work while attempting to continue breastfeeding. It's based on the stories and hacks of hundreds of working mothers who have experienced the struggles of working and breastfeeding, sometimes in rigid or insensitive office cultures.

But the photo series and the book's intentions go far beyond sharing relatable stories and advice. Shortall emphasized how important it was that the message of these images should help incite change in the still very problematic attitudes toward working mothers, and the lack of protection they have in the workplace.

"First and foremost, we will not truly be a country that values motherhood and working women until we have national, paid maternity leave," Shortall wrote. "Corporate leave and lactation rooms do nothing for blue-collar workers, many of whom get zero paid or unpaid leave. Is that really how we value motherhood, by making the lowest-income and hardest-working among us go back to work at a few days postpartum? Secondly, we need enforceable breastfeeding laws that protect all working mothers. Currently Obamacare states that federal and 'non-exempt' (wage-earning) women must be given break time and a private, non-bathroom space in which to pump. Salaried workers and those who work for very small businesses are not covered, unless they live in a state with its own laws. Thirdly, we just need awareness that pumping at work happens, for more than a million American women a year. This is not a niche activity, and it's not OK to treat it as an inconvenience or the individual woman's problem."

More like this
An Open Letter To The Person Who Bought Steve Jobs’ Birkenstocks For $218,000
By Ginny Hogan
8 Money Saving Experts To Follow For Accessible Advice
By Maxine Harrison
Here's How To Support Jewish People Amid Rising Antisemitism
By Hannah Orenstein
MOBO Awards Found Kanya King On The Woman Whose Grit & Determination Spur Her On
By Kanya King
Get Even More From Bustle — Sign Up For The Newsletter