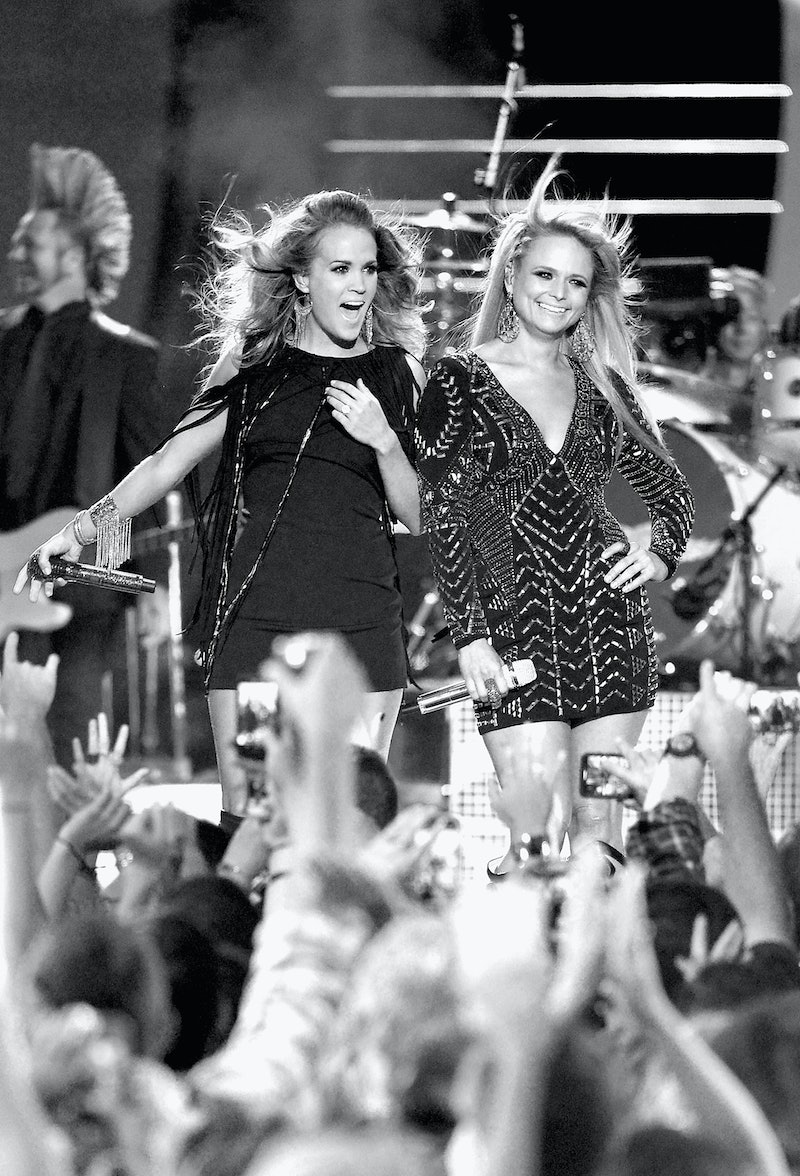 It's not exactly a secret that, for a long while, country music has felt a lot like a boys club — but, thankfully, it looks like things are changing. Sure, there are still a few male-dominated corners of the genre, but this year, the 2015 CMA Award Nominees for Music Video of the Year are almost exclusively female — and that feels like a victory in and of itself. The ladies of country music have more than earned their keep, and it's comforting to know that they are finally being granted enough recognition for their exemplary work.

So, who are the nominees for the 2015 CMA Music Video of the Year, and for what songs are they nominated? E! Online lists them as, "Biscuits," by Kacey Musgraves, "Girl Crush," by Little Big Town, "Girl in a Country Song," by Maddie & Tae, "Little Red Wagon," by Miranda Lambert, and "Something in the Water," by Carrie Underwood. So, yes — despite Little Big Town's two male members (Jimi Westbrook and Philip Sweet), all of the videos nominated featuring female artists.

These specific videos were honored for a reason, though. Yes, it feels good seeing the ladies have their day in the sun, but it’s because those ladies delivered superior work. Here’s why they stand out among the rest:

Why this video? Well, because it's fun! And, even more importantly, it doesn't take itself too seriously. The song uses some cutesy euphemisms, and the video follows suit — but in an extremely self-aware way. Basically, it's perfect.

After this song received so much unwarranted flack, it's especially gratifying to see the half-female, half-male musical group get honored in this category for their basic, yet beautiful and emotional video accompaniment — and it's also great to see the CMAs standing their ground and elevating this song and video to the lauded position it deserves.

There is just not enough that can be said about this awesomely feminist video. Perfectly complimenting the frustrated lyrics that bemoan the way women have been objectified in country songs, Maddie & Tae flip the typical "girl in a country song" with that of multiple dudes parading around in their daisy dukes and cowboy boots, not doing much of anything other than being "pretty little things" — not in an effort to also objectify men, but instead to show the absurdity of it all. Other highlights? The women unabashedly pulling at the uncomfortable bathing suits and jean shorts that plague them. Rock on, girls. I could watch this video for forever.

Lambert is just so effortlessly cool in this video. Sure, she's a mere 5'4" (me too, Miranda!), but her small stature does not matter one bit with the way she takes charge and asserts herself as a total bad ass with her enviable air of confidence. Added plus? The aesthetically pleasing pops of red in contrast to the desert-like backdrop and similarly muted, yellow-y tones. And, you know, the motel staff totally rocking out along with her.

Carrie Underwood, "Something In The Water"

Oh, the theatricality. Taking a literal note from the title of the song, Underwood sings as the interpretive dancers perform in a shallow pool of water around her. While Underwood is a vision in her beautiful, flow-y gowns belting her heart out, it's with the help of the dancers that the song truly comes to life. It makes you feel something, man. The sentimentality stays with you after the video ends and that's why it undoubtedly deserves it's nomination.