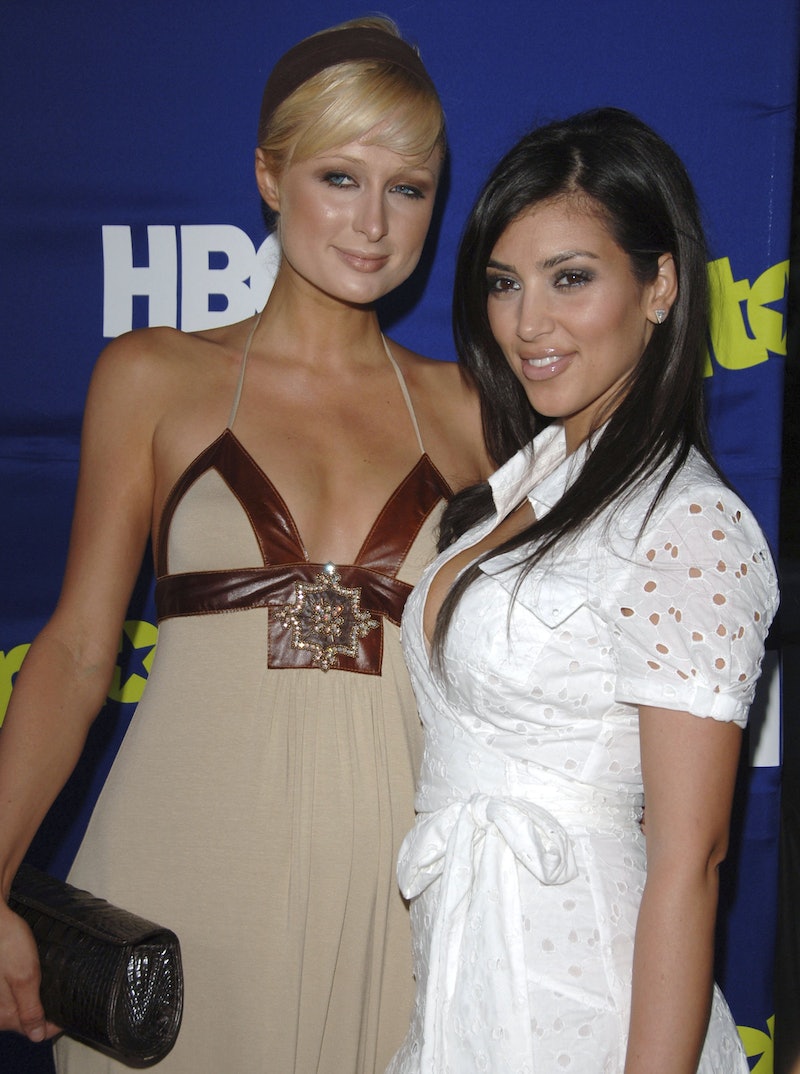 It's no secret that Paris Hilton and Kim Kardashian are not two peas in a pod. Though the two ladies have a lot in common — both reality stars, both extremely wealthy socialites, both known for appearing in high-profile sex tapes — it is well known that the media personalities are not friends. But it wasn't always like this. Years ago, they were actually BFFs, as you might remember. But what happened? Why aren't Paris Hilton and Kim Kardashian friends anymore?

Kardashian and Hilton were friends from an early age. You might even call them besties. After Hilton's rise to fame following the release of her sex tape and the start of her reality show, The Simple Life, Kardashian was totally there for the fun of posing for paparazzi photos with her then-pal and appearing on her reality show. Fun fact: Kardashian actually used to clean Hilton's closet for her. Yes, really.

The Huffington Post did an investigation through Google Trends to find out when precisely their friendship ended, and the publication guessed that it was officially dead by August 2009, which is the first time that people started searching Kardashian's name more than Hilton's. But obviously, the end of the friendship was not something that happened overnight. It was an ongoing development of competition for media attention, insults fired, and a whole lot of drama.

Something that may have spelled the beginning of the end of the friendship was the public's decreasing attention to what Hilton was doing. For a long time she was the tabloid queen, the one who people loved, people hated, people hated to love, people loved to hate. But it became apparent that she was the one who people were feeling, well, apathetic about. Us Weekly even published a magazine with the promise that it was 100 percent free of all Hilton coverage.

Meanwhile, Kardashian started coming up in the press after her sex tape was released prior to the beginning of a reality show you might have heard of called Keeping Up With the Kardashians. Hmm, does this story sound familiar to anyone? Their similar rises to fame and Kardashian slowly edging out Hilton to be more popular proved a toxic combination.

Before long, Hilton started dissing Kardashian in the press. For example, in 2008, she was quoted saying that she wouldn't want Kardashian's butt since it was "gross." Adding insult to injury, Hilton said, "It reminds me of cottage cheese inside a big trash bag." The two may have publicly made up after the shots fired, but it was undeniable that there was a change. After all, it can't be easy to get past being dissed that harshly publicly by someone who was supposed to be your friend.

After the friendship's death, Hilton was visibly upset when asked about Kardashian on Good Morning America back in 2011. When the interviewer asked if she felt like her moment in the spotlight had passed, she actually got up and walked out of the interview. Yikes! Reportedly, Kardashian laughed the whole thing off and rarely ever mentioned Hilton's name.

Since then, things seemed to have cooled down a bit. In 2014, the former frenemies reunited in Ibiza for a party for Ricardo Tisci. And it was posted on Instagram, so yes, it actually happened:

In 2015, Hilton did make a comment to Us Weekly about her former friend that some interpreted to be slight shade: "It's nice to inspire people," meaning she had inspired Kardashian. But in the same interview, Hilton also praised Kardashian for the work she has done and had positive things to say about KimYe. It is good to see that while there might be still a hint of smoke from the fire that once was, the ladies are (mostly) cool as a cucumber now. Only time will tell if things will change again!