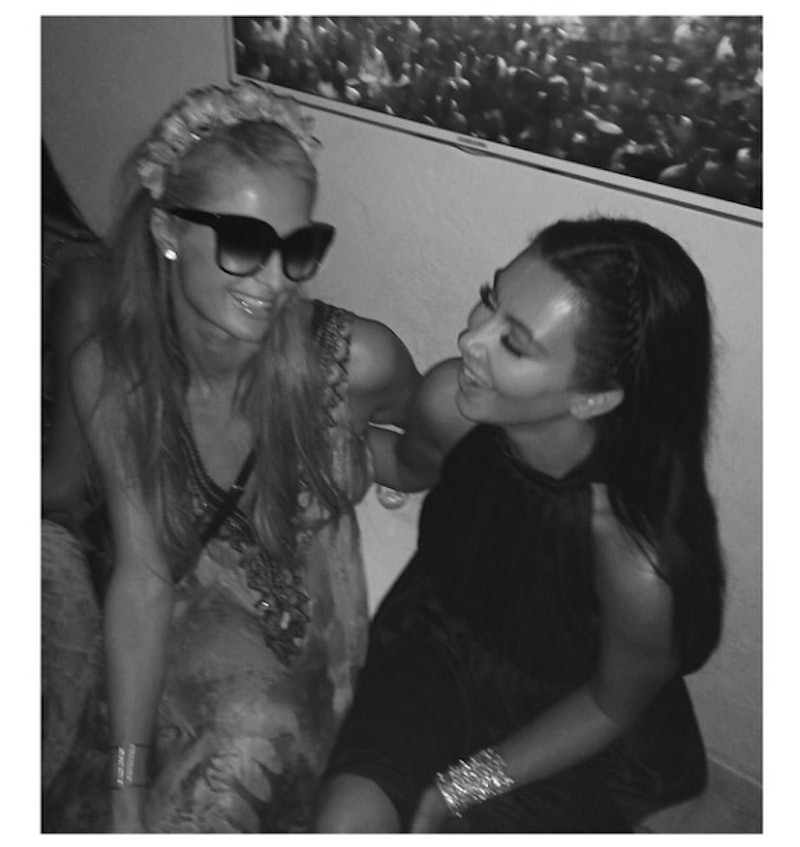 So much happened at Ricardo Tisci's birthday party over the weekend. The Kardashians, Kanye West and Justin Bieber wore black and posed with sultry frowns. Kate Moss wore a body fishnet. And, wouldn't you know it, Kim Kardashian and Paris Hilton squashed their long-standing feud. Kardashian Instagrammed a photo of the two infamous frenemies at the bash in Ibiza caught in the throes of friendly laughter. Hey, maybe there's some hope for the Middle East now, right? All we need to do is airlift enough Dom Pérignon and DJs into the area and everyone will get party-happy enough to forget their troubles. I mean, it worked for Paris and Kim. That has to count for something.

So does this mean that the ghost of Willow Pape has evaporated into the ether? Pardon the Kim Kardashian game reference, but just in case you haven't played, the sole villain of the game is a thinly-veiled Paris Hilton doppelgänger named Willow Pape. That's a big old burn, Kim. However, the PR message she's projecting at the moment says that there's no beef. Hilton could just be trolling for Kardashian stars, but I think they just got too drunk to remember what they were fighting about.

On Sunday, Kardashian posted the following picture to her Instagram with the caption: "Reminiscing about the 1st time we went to Ibiza in 2006! @parishilton it was so good to see you & catch up!! Loves it lol"

If you ask me, what we're seeing here is a surge of mid-party goodwill. Let's imagine the stages of partying that surrounded this armistice.

Kim held a caucus with her mom, regarding Paris' presence.

The two made accidental eye contact, and were forced to acknowledge each other.

Paris sent Kim a bottle of wine as an olive branch.

Feeling friendly and carefree, Kim came over to pay tribute to Paris.

The frenemies agreed to share Jell-o shots, to commemorate that one time they did them in Ibiza in 2006.

While dancing they told each other, "I love you so much and am so moved that we're friends again."

And in the morning, both woke up and thought...

Ah well, even if we don't have lasting reality TV star harmony, at least they'll always have the memories of Ibiza.