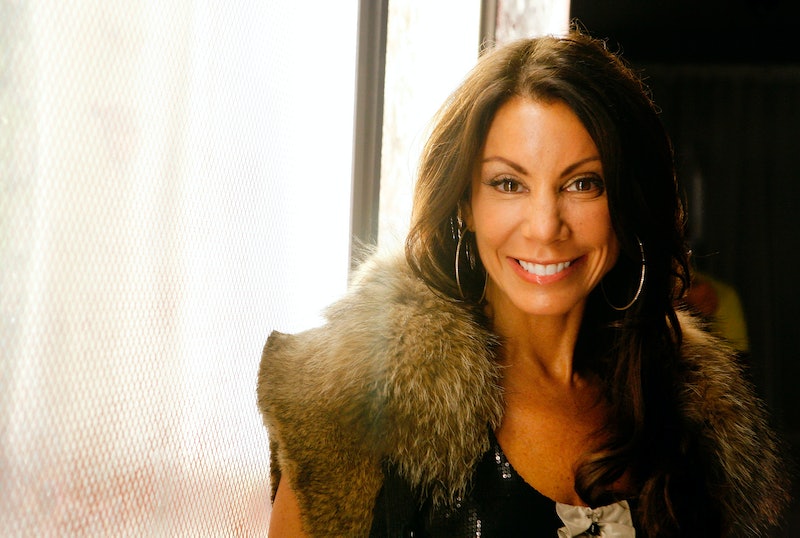 I'm pretty sure Teresa Giudice let out a howl from prison the day she discovered her Real Housewives of New Jersey rival Danielle Staub is engaged — again. Or, as Giudice so eloquently said during one of their most vicious fights: "You were f*cking engaged 19 times!" I suppose that's one way of accusing the person you loathe of having been around the block. But just how much truth is there to Giudice's scathing assessment of Staub's love life? How many times has Danielle Staub really been engaged? Let's break this down.

To start, the former reality TV star has had two husbands. In 1986, she married former FBI informant Kevin Maher, who told Star he met the Real Housewife at a party in Miami in the late '80s and that they had sex that night in a bathroom. He went on to make a lot of other not-so-flattering claims about Staub, including that she was a violent nymphomaniac. Yikes.

I should mention Staub accused Maher of raping her "on a bed of broken glass" in her biography The Naked Truth, but he denied the above allegations. In short: no one is actually shocked that they got divorced just one year later, right?

On to the next. Six years passed between Staub's relationship with Maher and her wedding to businessman Thomas N. Staub, with whom she has two daughters. The two reportedly met while Staub was a stripper and the wealthy CFO encouraged her to settle down and become a mom and homemaker. They were married for 14 years, but, in her book, Staub explained her reason for calling it quits, saying:

Staub was 24 the first time she was married, and there's no evidence that she was engaged prior to that. In the eight years since she divorced Staub, she was publicly involved with a younger man named Steve Zalewski, whom she accused of filming her during sex against her will (he claimed any sex tapes he has were made with her knowledge). Her sex tape was released to the public. If any engagement rings were exchanged during that time, I'm pretty sure photos of them would have been made public, as well.

Staub admitted to People that she has a "healthy sex life," but is a one-guy-at-a-time woman, which is an interesting response to the rumor that she slept with 1,000 men, but, hey, different strokes. Sure, she admitted in Season 1 that she was engaged to be married 19 times, but that was a joke, right? I mean... right?

In an interview with Toxic Chatter, Staub discussed how she tried online dating , but said she was never good at being single and that it wasn't easy for her to date with two children. The assumption you can make is either that Staub is so committed to the idea of not dating that she immediately guns for a marriage proposal, or that the engagement rumors are bunk.

She also joked in the interview (clearly she's joking, right?) about being engaged 19 times. No one — especially not a mother of two who has already been married twice — has the time or the energy to commit to 19 different men, probably.