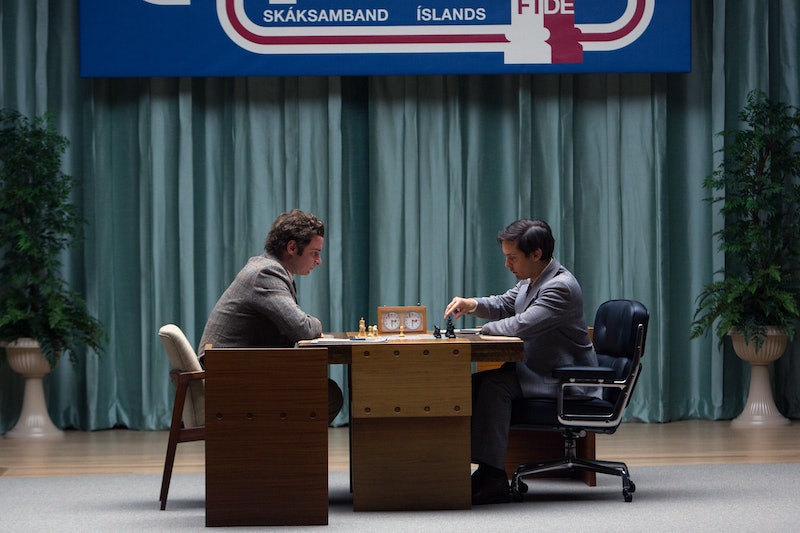 In an overlooked corner of Reykjavik, behind a tourist shop and between a couple adorable mansions, is a tiny street called Fischersund. It's named for American chess grandmaster Bobby Fischer, who came out on top of the chess world in a fated 1972 match against the reigning champion, Russian Boris Spassky. The 12-game tournament and its lead-up is now the subject of a new biopic Pawn Sacrifice, starring Tobey Maguire, directed by Edward Zwick, and written by Peaky Blinders scribe Steven Knight. But how accurate is Pawn Sacrifice in depicting the real events?

Biopics occasionally take artistic liberty with their subjects, but the best of them find an interesting angle and pursue it rather than simply presenting an overview of an individual's life. This is where Pawn Sacrifice succeeds — it focuses on Fischer's upbringing and the ways his childhood impacted his social and cognitive development, and his eventual debilitating paranoia. These are aspects of Fischer's personality that weren't often presented at the zenith of his fame, though the chess match itself was the subject of news broadcasts for weeks around the world. And though the nitty-gritty of chess is not exactly center-stage in the film, the technical aspects of the game still play an important role — important enough that filmmakers took care to get it right. Here are a few of the key ways that the creators of Pawn Sacrifice got the story right.

Chess.com investigated the accuracy of the chess moves in Pawn Sacrifice, with intriguing results. Quebecois chess master Richard Bérubé served as consultant on the film, and this apparently resulted in a few scenes with surprising faithfulness to the actual matches Fischer played in his life. In an early scene when a young Fischer plays a match at his future chess tutor's shop, chess writer Olimpiu Urcan also pointed out that the board is identical to a famous 1900 match.

The few moves shown during the Fischer versus Spassky match also correspond to the moves recorded from the actual 1972 face-off, so clearly chess didn't completely take a back seat to the personal narrative in Pawn Sacrifice.

2. FBI Surveillance At The Height Of The Cold War

Flashes of insight into Fischer's childhood are presented as FBI files in Pawn Sacrifice, with a scrolling marquee across the bottom of the screen. It appears that even as a child, Fischer was actively watched. And, according to an interview with screenwriter Knight in Interview Magazine, communists (Fischer's mother was an active member of the Communist Party) were indeed placed under FBI surveillance. This likely contributed to Fischer's paranoia later in life — his conviction that he was constantly under watch.

In 1971, shortly before he traveled to Reykjavik for his Spassky showdown, Fischer appeared on the Dick Cavett show. Pawn Sacrifice reconstructs this television appearance — though Knight told Interview that he didn't incorporate much existing dialogue into his screenplay, Fischer's public appearances were some of the most important source documents in his research. Maguire nails Fischer's mannerisms, likely due in part to the existence of such recordings of his behaviors.

"Arrogant," "conceited" — this is how director Edward Zwick describes Bobby Fischer in the video above, calling him the "first punk hero." It would be easy to assume that the film exaggerates the pop culture capital chess held in the ’70s, but for a brief moment, the game was everywhere. Fischer's match was covered on the BBC; he had the support of the United States government; the Fischer-Spassky match was widely interpreted as a proxy war for the Cold War. And though chess eventually faded out of the mainstream, for a while, Bobby Fischer was a rock star.

Pawn Sacrifice places its audience firmly inside Bobby Fischer's mind, but without working at the expense of the larger historical picture. It demonstrates not only how the Cold War came down on Boris Spassky and Bobby Fischer, but also how that pressure impacted the players politically and psychologically. Though its dialogue is invented, it still accurately portrays many elements of chess — and of the historical context that Fischer found himself caught up in.