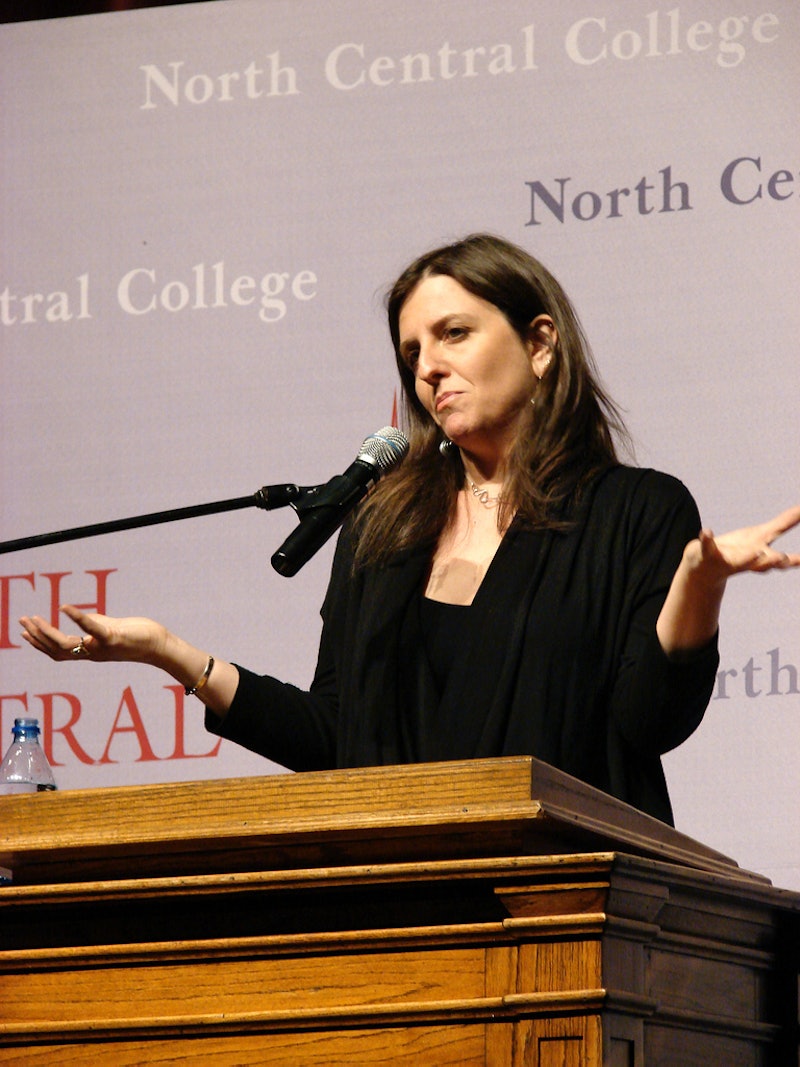 Jackie Sims is a woman on a mission. The Knox County, TN mother is campaigning to have The Immortal Life of Henrietta Lacks banned from Knox County Schools. Sims insists the book is "pornographic," and therefore unsuitable for the 15-year-old students assigned to read it.

The biography, written by Rebecca Skloot (pictured above), tells the tale of Henrietta Lacks, a poor African-American woman from Virginia whose cervical cancer cells were sampled and used for medical research without her permission. Passages in the book explain how Lacks contracted gonorrhea — which, if it did not cause her cancer, increased her risks of developing a tumor — from her unfaithful husband, and how she detected the "knot" she felt inside her womb. From the book:

With the door closed to her children, husband, and cousins, Henrietta slid a finger inside herself and rubbed it across her cervix until she found what she somehow knew she'd find: a hard lump, deep inside, as though someone had lodged a marble just to the left of the opening of her womb.

I'll let you take a cold shower before we move on from that "pornographic" paragraph.

Lacks died in 1951 after repeated bouts of radiation were unsuccessful in treating her cancer. But biopsies taken from her tumor lived on. Without her knowledge, and certainly without her permission, Lacks' cervical cancer cells taken by Johns Hopkins doctors were allowed to reproduce. According to The L.A. Times, samples of Lacks' tumor — referred to in the medical community as "HeLa" cells — were "shared among researchers, ... bought and sold" for medical studies. Capable of reproducing outside a human host, Lacks' cancer led to "such innovations as the polio vaccine, cloning, gene mapping, in vitro fertilization and more."

Despite the lucrative nature of medical breakthroughs, Lacks' family has never received any compensation for their matriarch's contributions to modern medicine. This is what makes The Immortal Life of Henrietta Lacks such an important and meaty story, and the students across the U.S. who are assigned Skloot's book are asked to weigh in on the ethical issues surrounding the HeLa cells. Was it right to use the cells without Lacks' consent? Do the end results justify a breach in medical ethics? Should Lacks' family receive compensation for the biopsies taken from her?

Skloot isn't impressed with Sims' allegations, and insists the Tennessee mother has "confuse[d] gynecology with pornography" in her reading of the book. She also points to lax reporting on the part of local news outlets, which refused to air the supposedly offensive portions of the book for viewers to judge. Skloot says assistant principal Jimm Allen sent her the following message on Facebook:

Know that the book and teachers have the complete support from the administration of the school. It’s an amazing book that fits with our Stem curriculum better than almost any book could. The next book that the sophomores are reading? Fahrenheit 451... Oh, sweet, sweet, irony.

That's right. Sims' son attends a STEM-oriented high school — L&M STEM Academy, to be exact — where he has been assigned to read an award-winning, medical biography written for a young adult audience. Something tells me he's a bright kid, and is more than capable of handling the information that women have cervices they can manually examine.

Skloot's biography points out that Lacks herself wasn't familiar "with the words cervix [and] biopsy," which are largely run-of-the-mill terms for today's information-overloaded youth. Most importantly, when describing the patient's situation, the language in The Immortal Life of Henrietta Lacks is scientific, not crass.

Although Sims' son was assigned an alternative book to read, his mother isn't satisfied. She has made it her mission to have the book removed from all Knox County schools. Without the support of most parents and any of the faculty, however, it seems unlikely that Sims will be successful.

More like this
Prince Harry Incorrectly Recites Christina Aguilera’s “Genie In A Bottle” Lyrics
By Jake Viswanath
'Mayfair Witches' Already Changed 2 Major Characters From The Books
By Grace Wehniainen
A New Netflix Doc Will Explore The Unsolved Murder Of Jill Dando
By Sam Ramsden
This First Look At 'The Gold' Shows Jack Lowden In A Whole New Light
By El Hunt and Sam Ramsden
Get Even More From Bustle — Sign Up For The Newsletter
From hair trends to relationship advice, our daily newsletter has everything you need to sound like a person who’s on TikTok, even if you aren’t.