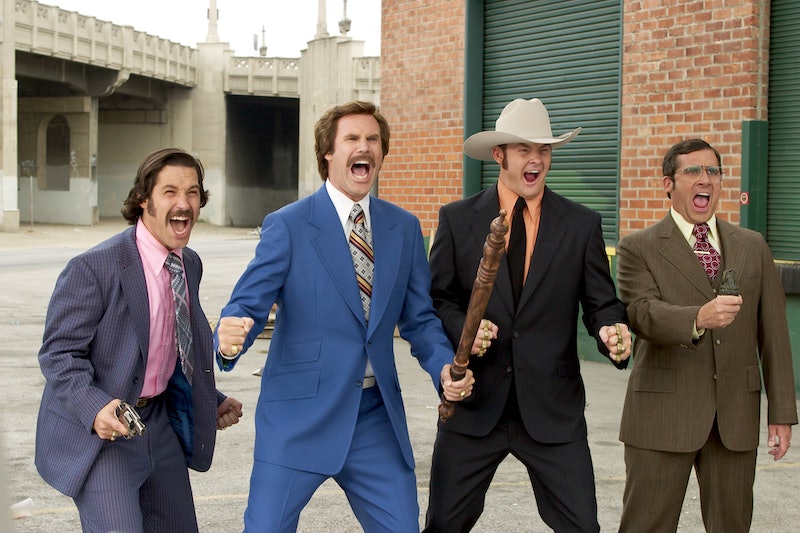 Oh, happy day! Nearly a decade later, and Ron Burgundy is finally back with the Channel 4 news team in a second installment to the comedy classic. Anchorman 2 was released Wednesday, and to get you back in the mood to see Will Ferrell, Paul Rudd, Christina Applegate, "The Octagon" and the rest of the gang, here are 13 facts about the first film that I'd bet Baxter's four paws you didn't know.

1. According to director Adam McKay, the original draft of the script was absolutely nothing like the finished product. The first version of Anchorman dealt with a planeload full of news anchors crashing in the mountains, discovering monkeys and martial arts weapons, and basically having a full out monkey vs. man battle. Um... What?

2. Judd Apatow was the one who exclaimed, in the scene in which Brian Fantana hits on Veronica in the news office while wearing Panther cologne, that the scent smells like "a turd covered in burnt hair".

3. We aren't told exactly what year Anchorman is meant to take place, but because the gang harmonizes the tune "Afternoon Delight" we can assume it's set after the song was released in 1976.

4. Will Ferrell found inspiration for his character after watching a biography on Jessica Savitch, a female news anchor who was treated terribly by some of her male colleagues.

5. Veronica and the other women from the Channel 4 news station visit a mexican restaurant called, "Escupimos en su Alimento," which in Spanish means "We spit in your food".

6. Will Ferrell improvised a ton of his most famous Anchorman scenes, like these classics.

7. Amy Poehler is set to appear in Anchorman 2, but joked that her scenes might be cut. This is because Poehler was cast in the original Anchorman as part of a subplot about a domestic terrorist group targeting San Diego. Notably, these scenes (which sound incredible) were cut.

8. Maggie Gyllenhaal auditioned for the role of Veronica.

10. At one point in the film, Veronica speaks in Spanish to Ron, and Ron's dog Baxter can be heard barking in the background, responding to her.

11. Anchorman took a lot of convincing to get made. Before it was brought to the big screen in 2004, it was pitched to DreamWorks nearly two dozen times, but the studio didn't think anyone would want to see the movie. But considering the film grossed $84 million domestically, it's safe to say the studio was wrong.

13. When Ron and Veronica are bickering over the rolling credits during a news taping, two of Paul Rudd's friends and fellow actors are credited: Jon Hamm and Adam Scott.