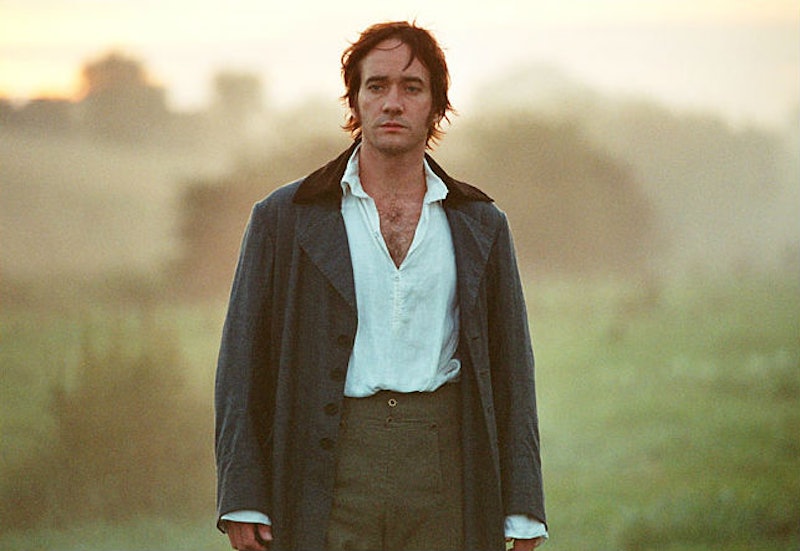 Can you believe it's been 10 years since the 2005 film version of Pride & Prejudice was released? It seems like yesterday Keira Knightley (who earned an Oscar nomination for her performance) and Matthew Macfayden were bringing Elizabeth Bennett and Mr. Darcy, respectively, to life. The movie continues to be one of my favorites and probably because Jane Austen just knows how to make me swoon, believe in love, and want to be a better writer. Oh, and it probably has to do with Mr. Darcy's ability to make me faint at every word he speaks and every look he gives. Yep, Mr. Darcy gives fans unrealistic expectations of love.

Have you ever met someone like Mr. Darcy? If you have, not only are you super lucky to have found such a unicorn, but I'm also extremely jealous. As for me, I have never, ever encountered someone with Mr. Darcy's charm (you might not think he's charming, but he is after he warms up), kindness, love, and the way he talks about Lizzie. Just think back to all those goose bump-worthy moments between the two and how much you just wanted to them stop being so proud.

Anyways, what better way to celebrate the film's anniversary than by looking at all the times Mr. Darcy was all romantic, aka something that never happens in real life? Warning: prepare to faint.

1. When He Declares His Love In The Rain

Nope. Never happens in real life. I'm pretty sure no one wants to get soaking wet while professing their love. Why would you? Plus, imagine standing in the rain trying to have the "I love you" convo? It probably wouldn't look like this and more mascara running down your face. As romantic as this scene is and makes my heart melt every time, you know you'd rather be dry while someone tells you they love you — and then for you to reject them.

2. When He Allows His Reputation To Be Tarnished

Mr. Darcy just lets his name be dragged through the mud thanks to Mr. Wickham, especially since he's trying to protect his sister and be an amazing brother. That just goes to show you that everyone you ever date will do the same thing. Wait, just kidding.

3. When He Saves A Family From Embarrassment

I'd like to believe that my one true love (wherever he's hiding) would save my family's reputation if need be. However, until I actually experience it, I refuse to believe it.

4. When He Shows Off Those Dance Moves

Mr. Darcy dancing will forever be swoonworthy. When any man dances it's attractive, at least in my book.

5. When He Grabs Elizabeth's Hand

He makes something so simple look so romantic. Plus, because Mr. Darcy appears closed off and hides his emotions, when he touches Lizzie's hand it shows that even the smallest touch and gesture can be amorous.

6. When He Participates In Complex Conversations

Those complex words and deep conversations are such a turn on. I'm waiting to experience it myself. He just has a way with words, that's for sure. *See #7

I'm pretty sure I'd melt if any man said this to me. Yep, I'd be a puddle.

8. When He Loves His Sister More Than Words

This sibling relationship is just the sweetest thing I've ever seen. Not everyone you meet is going to be family-oriented, but if they are hold onto them tight, just like you would Mr. Darcy.

9. When He Walks Through A Field

No one can pull this off. You know, except for Mr. Darcy.

With that said, I'll just leave you with this.