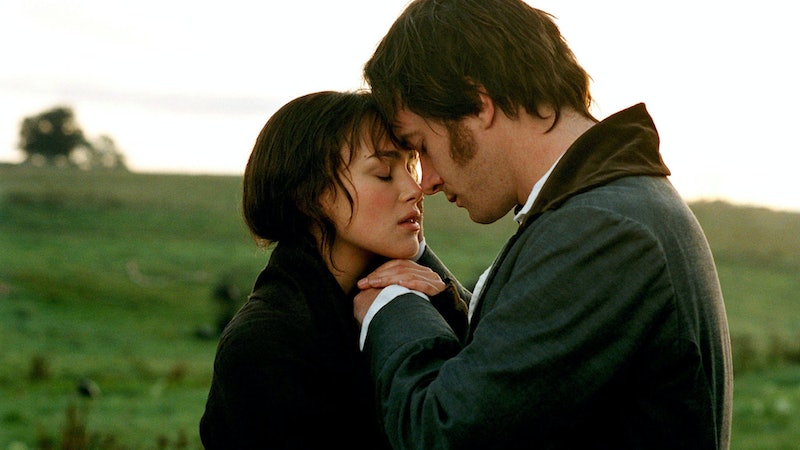 In 2007, a survey of British readers ranked Pride and Prejudice as the nation’s favorite book—ahead of Lord of the Rings, Harry Potter, and the actual Bible. No one from the legion of ardent Austen fans would be remotely surprised by this result. Pride and Prejudice, first published in 1813, is arguably Austen’s most popular novel, spawning not only many adaptations (including the 1996 BBC miniseries and Joe Wright’s 2005 film, as well as works like Bridget Jones’s Diary and The Lizzie Bennet Diaries), but also a whole subgenre of sequels and at least one very weird statue.

Why does a novel published over 200 years ago still have the power to turn normally sane people into rabid superfans? While not everyone would count Pride and Prejudice as their favorite Austen novel (my fave is 1817’s Persuasion), most would agree that the 1813 comedy of manners is Austen’s lightest and most outright hilarious work. The witty, bright Elizabeth Bennet is a total proto-feminist badass, and Mr. Darcy answers every “Convert a Jerk Into the Perfect Boyfriend With the Power of TRUE LOVE” fantasy we’ve ever had. And that’s not even taking into account the finely drawn familial relationships, the subversive social commentary, and Mr. Collins, who is clearly the best awful character ever.

To celebrate our enduring love for this wonderful book, I’ve made a list of seven things you might not have known or noticed about Pride and Prejudice the first time you read it. Look for them on your next rereading:

These days, Mr. Darcy is so famous as a character that his name seems simply to be a given: He is Darcy, end of story. But in 1813, the name “Darcy” would have told readers something important about his lineage: “Darcy” is a form of the name “d’Arcy,” meaning “of Arcy” in French (Arcy is a village in France). The name was brought over by the Normans when William the Conqueror invaded England in 1066, and it was borne by an ancient family of the peerage. So when 19th-century readers saw the name “Darcy,” they would have recognized that Austen was linking her character to a very wealthy, and very old family (and in this world, old money is the best kind of money). Similarly, Darcy’s first name, “Fitzwilliam,” would have evoked important associations for contemporary readers: as Dr. Janine Barchas points out, the Fitzwilliams were a real—and famous—family in the early 19th century. She writes,

Their home was measurably the grandest in England, with 1000 windows and a façade twice the length of Buckingham Palace. These real Fitzwilliams boasted ancestors dating back to the time of William the Conqueror…

So for Austen to have named her hero “Fitzwilliam Darcy” would sort of be like someone now naming a protagonist “Rockefeller Kennedy” (although you’d have to multiply the Kennedy and Rockefeller families by about a thousand years to really get an approximation).

2. Lydia is basically a sex kitten

On first reading, Wickham’s reasoning for running away with the 15-year-old Lydia Bennet is a bit of a mystery. Even for a man as unscrupulous as Wickham, running away with a gentleman’s daughter and refusing to marry her is no small thing, especially when he could run off with someone of the working class with far fewer social consequences. And why Lydia? She’s selfish, stupid, and generally irritating. Even if Wickham assumed he couldn’t be forced to marry her, why take the risk?

We can find the reason couched in Austen’s initial description of the youngest Bennet daughter:

Lydia was a stout, well-grown girl of fifteen, with a fine complexion and good-humoured countenance; a favourite with her mother, whose affection had brought her into public at an early age. She had high animal spirits, and a sort of natural self-consequence…

Austen is too decorous to say that Lydia is a lusty sex kitten, but, reading between the lines, we can see that it’s true: she’s “stout,” “well-grown,” and full of “high animal spirits.” In short she’s an outgoing, voluptuous, flirtatious teenager who probably looks older than she actually is. Wickham may have never wanted to marry her, but he certainly wanted to have sex with her.

3. The Bingleys are “new money”

Charles Bingley, with 5 thousand pounds a year to his name, is a very good match for Jane Bennet. What is discussed only sparingly is the fact that the Bingleys, though wealthy, have only had their money for a single generation. In fact, the reason that Mr. Bingley rents Netherfield in the first place is that, unlike old families like the Darcys, he doesn’t yet own an estate. Austen alludes to this fact here and there to make sly jabs at Bingley’s snobby sisters, writing

They were of a respectable family in the north of England; a circumstance more deeply impressed on their memories than that their brother's fortune and their own had been acquired by trade.

Caroline and Louisa’s hypocrisy becomes even more apparent later in the novel in regard to Mr. Gardiner, Lizzy’s uncle. Austen writes,

The Netherfield ladies would have had difficulty in believing that a man who lived by trade, and within view of his own warehouses, could have been so well-bred and agreeable.

The joke here is that their own father was a tradesman; their disdain for those in trade is a thinly veiled contempt for their own origins.

4. Pride and Prejudice is a second draft

Austen published Pride and Prejudice in 1813, but she actually wrote the first draft of the novel, titled First Impressions, between 1796 and 1797, when she was only 21. She wouldn’t see the novel in print until she’s reached her late-30s.

5. Gretna Green was the Las Vegas of the 19th century

Numerous times throughout the novel, characters make references to Gretna Green or Scotland, particularly in relation to Lydia eloping with Wickham. In her “Hey, I’ve run off!” letter, Lydia boasts, “I am going to Gretna Green, and if you cannot guess with who, I shall think you a simpleton.” When Lizzy tells Mr. Darcy that her sister has eloped with Wickham, the most damning thing she has to say is this: “[T]hey are certainly not gone to Scotland.”

Why this obsession with Scotland? Well, it was the Las Vegas of 19th-century England! In 1754, a marriage act was instituted in England that required that people under the age of 21 had to have parental consent to get married, and that everyone had to either get married in a church after the banns had been published (which took a number of weeks) or after acquiring a special license, which could only be gotten from high-ranking church officials. BUT the law was only enforced in England and Wales, not Scotland. So if you wanted to sneak off without your parents knowing, or you just needed a quickie wedding, you went to Scotland, and Gretna Green was the first town on the Scottish border. Thus, when the Bennets realize that Lydia and Wickham haven’t gone to Scotland, they’re realizing that the couple isn’t married and that the whole family is ruined.

6. Austen worried that Pride and Prejudice might be too light

Austen was proud of Pride and Prejudice, and she wrote of Lizzy Bennet, “I must confess that I think her as delightful a creature as ever appeared in print.” But she was also concerned that her novel was too silly; Literature at that time often carried a heavy dose of didacticism that Pride and Prejudice lacked (something for which most of her contemporary readers are grateful). She wrote to her sister, Cassandra,

The work is rather too light, and bright, and sparkling; it wants shade; it wants to be stretched out here and there with a long chapter of sense, if it could be had…

Given these concerns, it makes sense that Austen’s next novel was Mansfield Park (1814), the most serious of all her works—and, consequently, most people’s least favorite (Sorry, Fanny and Edmund).

When Lizzy gets engaged to Darcy, Mrs. Bennet nearly loses her mind with joy, crying, “I can think of nothing else! Ten thousand a year, and very likely more! 'Tis as good as a Lord!” Darcy’s “ten thousand a year” is touted throughout the book, clearly indicating that he’s of very great consequence. But what does then thousand pounds per year mean by today’s standards?

Well, it’s sort of hard to know. In 1989, Dr. James Heldman wrote a paper in which he attempted to adjust 1810 incomes for contemporary inflation; he estimated that Darcy earned the equivalent of about 330,000 US dollars a year; however, he admitted that this number doesn’t really work because it doesn’t account for the very different economy of Britain in the early 19th century, which was more rural and less currency-based than ours, or the fact that many goods were relatively cheaper in the nineteenth century, as were the costs of maintaining servants. In 2013, The Telegraph updated Heldman’s work, estimating that Darcy’s income would now be closer to 620 pounds a year (or close to a million US dollars). But The Telegraph makes further adjustments to account for the higher spending power of the 19th-century pound and other idiosyncrasies of the 19th-century economy, and calculates a “prestige value” for Darcy’s income that is probably more accurate: twelve million pounds, or approximately 18.5 million US dollars a year.

“18.5 million!”, you might say. But that’s not all, folks. It’s important to know that Darcy’s income (and that of gentlemen in the 19th century in general) is, in fact, interest. Darcy, like the rest of the landed gentry, had his money invested in secure government bonds that gave him four or five percent interest a year. The idea was that a gentleman could live off of this interest and leave the principle untouched to pass on to his heirs. So, for example, when we learn that Mr. Bingley earns 4 or 5 thousand pounds a year, we can assume that his full inheritance is around 100 thousand pounds. Darcy, earning ten thousand pounds a year, would have an inheritance closer to 250 thousand pounds. So if we return to the idea that in today’s money, Darcy is earning 18.5 million dollars a year, we can roughly estimate that his actual total value is something like 465 million dollars.* And that doesn’t even take into account the value of his estate or the income he earns from farming at Pemberley!

So what is the point of playing with all of these numbers? The point is this: When Elizabeth’s parents die, she will be entitled to an income of about 40 pounds a year—that is, .4 percent of what Darcy brings in every year from his investments alone. So when she refuses his first proposal, it’s not just a matter of turning down a guy she doesn’t like—it’s a radical act of choosing her own happiness over financial security for her and her entire family, at a time when a woman of her station would have very few options for increasing her income outside of marriage. Can you blame Mrs. Bennet for her hysteria when Lizzy does accept him? She's just married into a family that has today's equivalent of nearly a half billion dollars. Not too shabby, right?

* Please be advised that these numbers are very inexact.