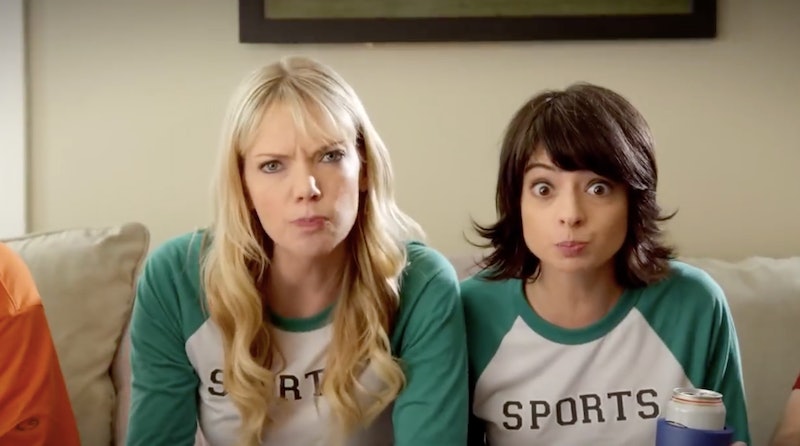 Full disclosure: I'm not a sports person. My enthusiasm for athletics just about matches Daria Morgendorffer's zeal for volleyball. But my boredom with all physical activity aside, everything involved in a Football Sunday party is of great appeal to me (food, drinks, yelling at the television). So, how do I host a Sunday Funday party without the sports? The pastimes of snacking and shouting at the television should be for ALL Americans — not just the ones who understand the language of football.

First of all, you need to assess all of the things that make a football party a football party. Think in particular of all the things that made you most feel most excluded as one of the non-jocks back in your school days. Number one: you'll need to manufacture a sense of tribal unity. Two: think about working in some chants. Three: establish an in-group language that will confuse everyone who doesn't understand what the nature of your conversation is. Snacks and television-watching you've got covered.

Sure. In the absence of a sport, it may seem difficult to do those things that I've outlined above. But where there's a will, where's a way. We've teamed up with SKYY Barcraft™ to bring you a guide to constructing the perfect weekend party that has nothing to do with football.

Go HAM On Snacks... ALL The Snacks.

Why this is crucial: People will not show up to your party unless there is food. No food, no party.

Stock your Sunday un-football bash with all of the glorious kinds of finger foods that jocks ingest in excess while using football as an excuse. Cheese-stuffed pigs in a blanket? Bring 'em out! Seven-layer-dip? Pssht, is that even a question? Chicken wings? Fry 'em up! In a phrase, go ham on your snacks. Also, maybe bring some actual ham.

Why this is crucial: Chants inspire tribal unity... even if you don't have a tribe.

Your song should have the primal aggression of "We Will Rock You," and the lyrical simplicity of "Whoomp... There It Is!" Make one up by playing a dance track, and yelling something like "Pump it up!" or "YEEAAAH!" at agreed-upon times in the track. When all else fails, just blast Jock Jams and pretend that you're in some sort of stadium.

Why this is crucial: Igniting your competitive spirit; establishing a sense of good (or not-so-good) sportsmanship.

Inventing your own game gives you an outlet for your competitive spirit despite the fact that you always got picked last for dodgeball in gym class. Not that you care or anything. You have a BETTER kind of game that came to be out of the sheer brilliance of your brain. Think of combining your favorite board games all into one. Imagine how a combo of Risk, Pretty Pretty Princess, and Pokemon will get your blood pumping! Also, consider competitive fort-making.

Why this is crucial: Indulging your passion for winning at things that don't matter; placing bets and winning money.

You wanna root for something and someone, but you'd prefer that those somethings or someones were not hulking padded humans chasing a ball down a field. Watch something on TV that declares a clear winner and requires you to have a strong opinion of whom or what that winner should be. Think the Westminster Kennel Club show, Nathan's Hot Dog Eating Competition, Antiques Roadshow, House Hunters, or old episodes of Legends of the Hidden Temple.

Why this is crucial: Establishing tribes, because this event brings out the primal beast in you.

Dividing partygoers along entirely arbitrary lines makes things interesting. Assign half of your party one color or print to wear and another color or print to the other (i.e. red vs. blue; black vs. white; polka dots vs. stripes)... and BOOM! You've got tribes.

Why this is crucial: A big TV draws a big crowd. It's science.

Especially when it comes to a party organized around viewing the tube, the operative rule is "go big or go home." You may even want to consider buying a projector for the added fun of being able to make hand puppets against the image of what you're watching.

Step Up Your Cocktail Game

Why this is crucial: Cocktails = general merriment.

At the end of the day, good entertainment, good people, and the right cocktail give you reason enough to celebrate Sunday. This cocktail one only takes three steps: one part Barcraft™, two parts of favorite mixer, three stirs ... and that's it.

That's all you need to relish in your sports-less Sunday Funday. You win at life!

This article was sponsored by SKYY Barcraft™. Get cash back on your purchase with this Groupon deal!