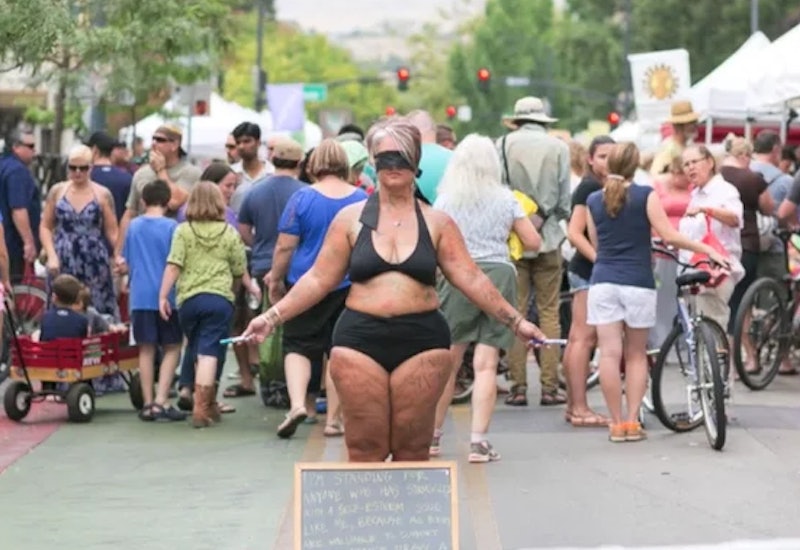 Body acceptance performance pieces are commonplace in relatively progressive cities like London and New York City, but what if someone conducted an experiment in a less cosmopolitan city? When Boise, ID-based activist Amy Pence-Brown stood blindfolded in a bikini in public, wearing nothing else but a sign instructing passers-by to draw on her body, she entrusted herself to a marketplace full of complete strangers. Her experiment had the potential to go terribly wrong — but instead, the results showed just how accepting humanity can be.

The premise was simple: Pence-Brown, a mother of three who founded the Boise Rad Fat Collective, stripped down in a downtown Boise market, donned a blindfold, and stood alone with a marker in either hand. A sign leaning against her knees read, "I’m standing for anyone who has struggled with a self-esteem issue like me, because all bodies are valuable. To support self-acceptance, draw a heart on my body." With that, all she had to do was wait.

Although she drew quite a few stares from passers-by as she set up camp, so to speak, it didn't take long for a throng of people to form. Pence-Brown had been standing for mere seconds when a woman made her way through the crowd to draw the first heart.

With that, all bets were off as teenage girls, little boys, elderly women, and more all left their marks on Pence-Brown. According to her blog, not everyone left a heart — by the time her fifty minutes in public were done, she was covered in words like "badass," "divine," and "power." "I Love Me," read one statement, hearkening back to the point of the entire experiment: Self-acceptance.

If all this sounds familiar, that's because you may have come across a similar experiment recently. Pence-Brown drew inspiration from a recent video by activist group The Liberators International, which featured Jae West undressing at Piccadilly Circus in London. Like Pence-Brown, West wore nothing but a blindfold, her underwear, and a sign encouraging strangers to draw hearts on her body to support self-acceptance, and the results were similarly uplifting. By the end of their respective videos, both women were covered in hearts from head to toe.

However, West and Pence-Brown are different people, and Pence-Brown's experiment answers some of the questions that first emerged during West's — the primary one being whether people would react as positively to a woman who didn't necessarily fit society's conventional beauty standards. This isn't to say that West isn't incredibly brave for stripping down in public, or that her experiment wasn't meaningful; body acceptance is for everyone, and we can never know what someone has or hasn't been through based solely on their appearance. Rather, the question is about us a society, and how we ourselves approach such experiments as observers.

Pence-Brown is almost 40, and she has been pregnant four times. As she wrote in her blog post regarding the experiment, "How would it be received if the woman had been less socially acceptable in appearance, like, fat? And, say, a mom who's nearly 40-years-old?" Her body shows the marks of age and a life well-lived, and she's proud of that fact. As she writes on her blog, her stretch marks "represent [her] transition from a chubby adolescent to a curvy teenager to a woman who's been pregnant four times." Her "sagging breasts... nourished three babies." Her tanned skin is from a "summer spent at the Boise Public Pools with [her] friends and [her] children."

Despite these deviations from the societal ideal, Pence-Brown's experiment shows that people are more capable of acceptance than we might think — and that is a hopeful thing. In a culture which routinely criticizes bodies for not fitting one ideal or another, Pence-Brown's video isn't just heartwarming. It's a sign that maybe, as a society, we're ready for a change.

More like this
The 19 Best Tweets & Memes About Bisexual Awareness Week
By Lexi Inks
This Psychological Effect Might Be Keeping You From Hitting Your Goals
By Lexi Inks
How To Politely Reject Someone Who Keeps Asking You Out
By Laken Howard and Lexi Inks
Bustle Daily Newsletter: October 4, 2022
By Hayley Schueneman
Get Even More From Bustle — Sign Up For The Newsletter