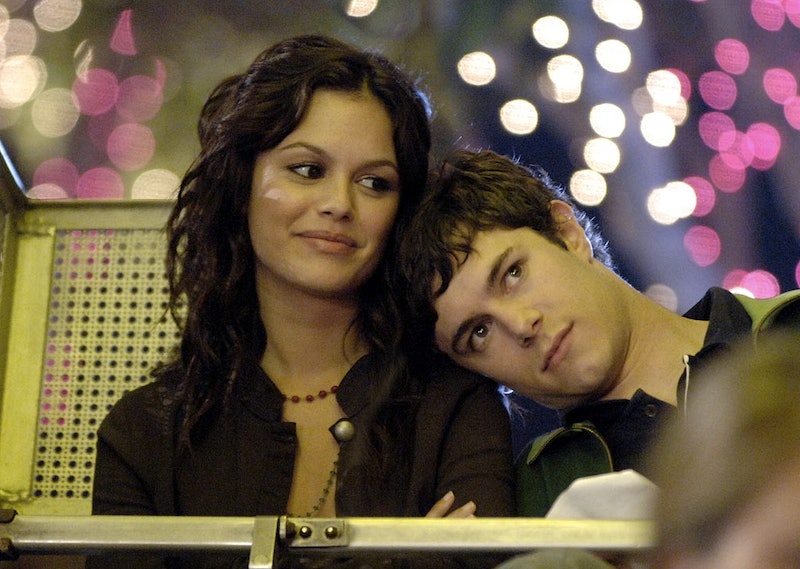 I miss two crucial things from my childhood: AOL Instant Messenger and The O.C. The two converged into one during my thirteenth year on this Earth when I would hurry home from school and "get online" (cue door opening sound effect), just to set a quote from The O.C. as my away message and then read Tiger Beat until someone messaged me, asking if I was "there." (I liked to keep the people guessing, so sue me.) It wasn't hard for a doe-eyed midwestern girl who hadn't learned about hair straighteners to find The O.C. completely addicting and quotable. In fact, as nostalgic millennials everywhere run to their nearest Urban Outfitters to by scrunchies and mini backpacks that don't fit anything more than a change purse — they're wildly impractical, you guys — I suggest that we all log back onto AIM and set our away statuses as a quote from The O.C.— or, you know, make it our email signatures, because 2015.

If you are like me, and quoted The O.C. on your AIM status — welcome. You and I should go get a drink. If you didn't, it's not too late. Throwbacks are huge right now, and honestly quote tattoos are still v. popular. Just keep it in mind.

Here are 11 quotes from The O.C. that were definitely an AIM status of yours or your "buddies" at one point in your life.

You used it when: You were feeling moody, but also relevant. You wanted people to know that you watched the most popular show on television (not scientifically proven, but still), and you were edgy enough to swear.

2. "China has alopecia... It's just not right for a little girl to love a hairless pony."

Said by: Julie Cooper-Nichol (at the time).

You used it when: You were feeling funny, and you wanted everyone to know. You definitely followed the quote up with "make it vibr8!!!" so people would text you... even though nobody texted you.

Said by: Marissa and Ryan, respectively.

You used it when:You were crushing on someone in Language Arts, but didn't want to seem totally taken by them. So you threw the ~LoVe~ vibes out there, only hoping to catch the attention of said person.

4. "Allow me to introduce you to a little something I like to call Chrismukkah."

You used it when: You were really wishing you were a Cohen family member, warts and all.

You used it when: You wanted to seem like you were up to no good, but in reality, you were just hanging out in your basement with your dog watching My Super Sweet 16.

6. "The more crap you go through, the more you kind of want to be alone."

You used it when: You had all those feels. (And were probably experimenting with heavy amounts of eyeliner.)

You used it when: You just started "going out" with someone new, and were all about that mystery.

8. "Acknowledge me now or lose me forever."

You used it when: The above relationship was on the rocks and you just wanted to be ~seen~ by the one you ~loved~.

You used it when: Sappy? Sure, but before vague-booking or subtweeting became a thing, you definitely put this in your away message hoping to ignite a light in the soul of your crush. (Or Lance Bass.)

10. "Do you ever wonder what your life looks like through someone else's eyes?"

You used it when: No one understands you and your emotions! (With the addition of all your BFFs' initials — "<3 SF HP MM AM IL AP <3" — because you couldn't get through life without them!)

Said by: Everyone, everywhere.

You used it when: OK, maybe this isn't a quote, but this was the away message of every child that watched Marissa die in Ryan's arms. You also linked it to Imogen Heap's version of "Hallelujah," because it's not an O.C. death without the haunting sounds of Imogen Heap.

More like this
'Friends' Creator Marta Kauffman Opened Up About Misgendering A Guest Character
By Grace Wehniainen
Kimberly J. Brown & Daniel Kountz Looked Back On Their ‘Halloweentown’ Romance
By Stephanie Topacio Long
Jesse Tyler Ferguson Had A Funny Run-In With A Fellow ‘Modern Family’ Alum
By Grace Wehniainen
Drake’s Surprise Performance With The Backstreet Boys Was Fans’ Fire
By Stephanie Topacio Long
Get Even More From Bustle — Sign Up For The Newsletter