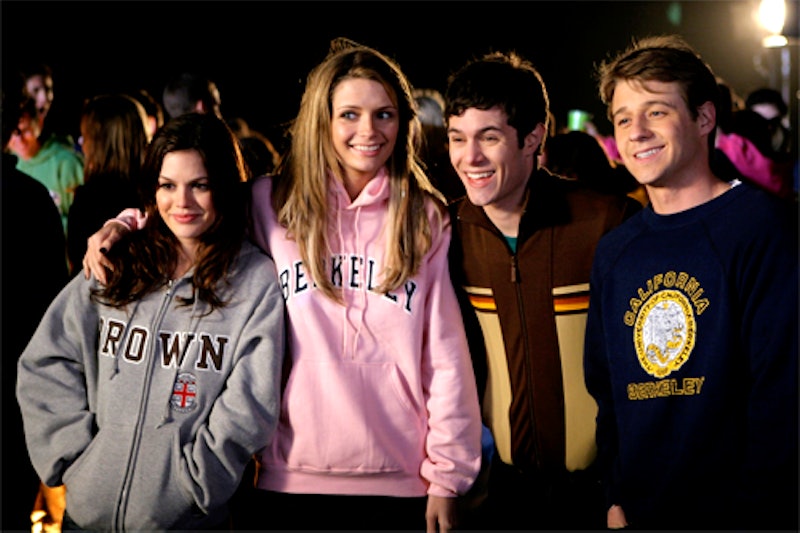 Although The O.C. went off the air nearly a decade ago, it remains a pop culture monolith that we can't forget. And chances are, if you're as dedicated a fan of the show as I am, then it changed your life and is still capable of evoking the same amount of emotion from you now as it did back then. If it wasn't, we wouldn't still be writing about it all these years later. Whether Seth Cohen was the perfect TV boyfriend in your eyes, or you were watching The O.C. for the high school melodrama, the show had something for everyone.

A two week binge watch has left me emotionally crippled in a way that only a Cohen could relate to. I can't sleep at night knowing that Summer got into Brown University, and I didn't, ruining my dreams of slowly becoming her. I sob into my cereal remembering that Seth Cohen is not a real person I might lock eyes with at a grocery store one day. And I can't. Stop. Watching. It's getting bad, guys.

So, now that I'm an expert, here are nine problems that your love of The O.C. leaves you with, all these years later.

1. Gross Confusion About Whether You Want Sandy To Be Your Dad Or Your Boyfriend

Potentially a me-specific problem. It's just, I don't know, part of me wishes I had a Sandy to go to as a moral compass and well of fatherly advice. The other part of me thinks that those distinctive eyebrows absolutely make him attractive. So. All of that.

2. Occasional Panic Attacks When You're Rewatching A Particularly Dramatic Scene

Even though you know what's going to happen, and that the psychotic suitor of the week isn't going to kill Marissa (this time, at least), you still fly into a fit whenever someone gets held at gunpoint. Which is often. So it's just one gigantic panic attack.

I initially got into the series to prep myself for a trip to L.A. Imagine my surprise when I found out that Chino, portrayed as a veritable ghetto on the show, ended up resoundingly middle class. Of course, The O.C.'s version of California is the better version for the sheer fact that Seth Cohen exists in it, but still.

4. The Entire Ordeal That Comes With The Fact That It's Not On Netflix

Unless you invested in the box sets back in 2008, you're utterly at a loss if you want a spontaneous O.C. rewatch. Much like CW alum Veronica Mars, The O.C. is not available to stream on Netflix. Moreover, you're not going to find an 8-year-old show lurking in the single Best Buy in your neighborhood that hasn't gone out of business yet. BRB, sobbing.

5. Feeling Like You're Still Not Over Marissa Cooper's Death, And May Never Be

I mean, love her or hate her, her death was a turning point in the series and a defining moment for many fans.

6. The Dark Realization That You're Not A Marissa Or A Summer, You're A Taylor

Like, as much as you want to be an adorable closeted brainiac, or a beautiful, untouchable cool girl, you suck with guys and would probably be second runner-up in the win-Ryan-Atwood contest. Actually, I feel more like an Anna Stern more than anyone, but whatever.

7. Perpetual Dissatisfaction In How All Men Pale In Comparison To Seth Cohen

Seth is the witty, pasty, skinny, hot, intelligent, dedicated, endearingly nerdy Nice Jewish Boy we all want to date. Problem is, men like that don't exist. Or rather, for every one of those men that DO exist, there are like 75 neckbeards or obsessive sociopaths that you would dismiss IMMEDIATELY if they declared their love for you on a coffee cart. That's the reality, folks, and we're just going to have to live with it.

8. Perpetual Disappointment In Adam Brody For Not Wanting To Be Seth Forever And Ever

He's been pretty vocal about the fact that he has no interest in revisiting that character. And yet, there's a side of you that is waiting day in and day out for an O.C. reunion. Forever and ever.

Sad truth: most early 2000s indie bands that WEREN'T Death Cab For Cutie and The Dandy Warhols pretty much sucked. Don't be fooled by The O.C.'s finely curated soundtrack that was your gateway in some of the best music of the era.