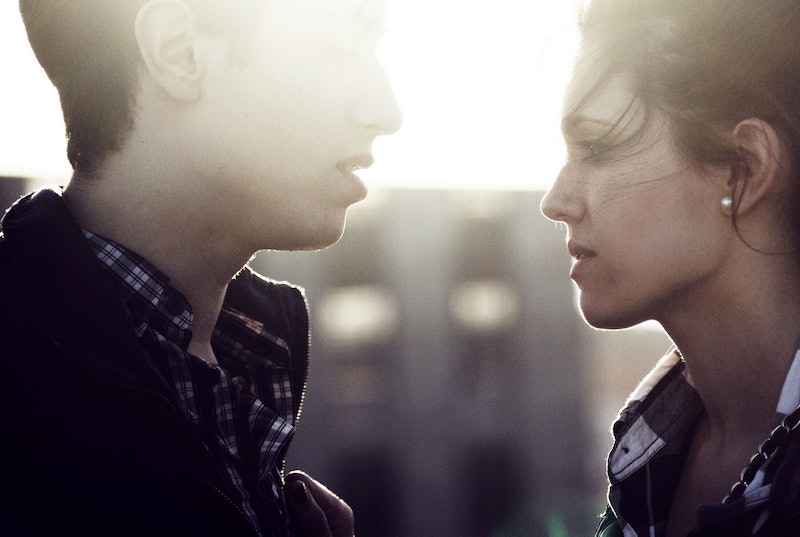 If you believe that once you stop arguing in a relationship it means there's nothing left to fight for, then you probably think couples who never throw down once in a while are a little strange. Although no one really enjoys going at it with their significant other (and those who do really need to check themselves), fighting in a relationship can be productive in a multitude of ways. After all, passion doesn't always express itself in the bedroom, despite our best intentions.

Once you have a few serious fights under your belt, you start to realize that every pair has their own unique argument style. Some duos prefer the explosive, plate-throwing passion romanticized in mafia movies, while others are into long, drawn out passive-aggressive matches. Then there are the types who withdraw and fail to engage for weeks on end before a soft spoken intervention brings them back on course. Whatever your fighting style — and there are many — the old adage that "love means never having to say your sorry" usually doesn't fly. In fact, if you love someone, it's probably more likely that you'll be apologizing to them profusely for many things throughout the course of your union.

Here are six types of fighting that might spark such apologies, because an argument here and there definitely doesn't mean your relationship is doomed.

1. The Fight That Resets Your Boundaries

Sometimes a fight really shows you where the line between OK and totally not cool is, and the only way you'll know is when you cross it.

2. The Fight Where You Learn Something New About Each Other

If you're listening, arguments can actually teach you something about your partner, so despite being all amped up and upset, you might want to keep your ears open.

The fiery energy that sparks a fight often happens to be the same energy that inspires the hottest sex of your life, so never fear: some fights have a silver (and sexy) lining.

4. The Fight Where You Promise To Treat Each Other Better

The best fights are the ones that end in a solemn vow to never engage in the kind of behavior that led you to the blow up in the first place. Sometimes the only way to improve a relationship is to let it get to a place where it needs fixing.

5. The Fight Where You Learn Something About Yourself

Mid-fight is often the place when you suddenly stop and realize that the behavior that got you there is actually related to some childhood trauma you've yet to deal with.

6. The Fight Where You Realize Fighting Isn't So Bad

There's nothing more satisfying than getting to the point where you're comfortable enough in your relationship to know that one fight isn't going to derail everything.

Want more of Bustle's Relationships coverage? Check out our latest video on being a bridesmaid for hire: