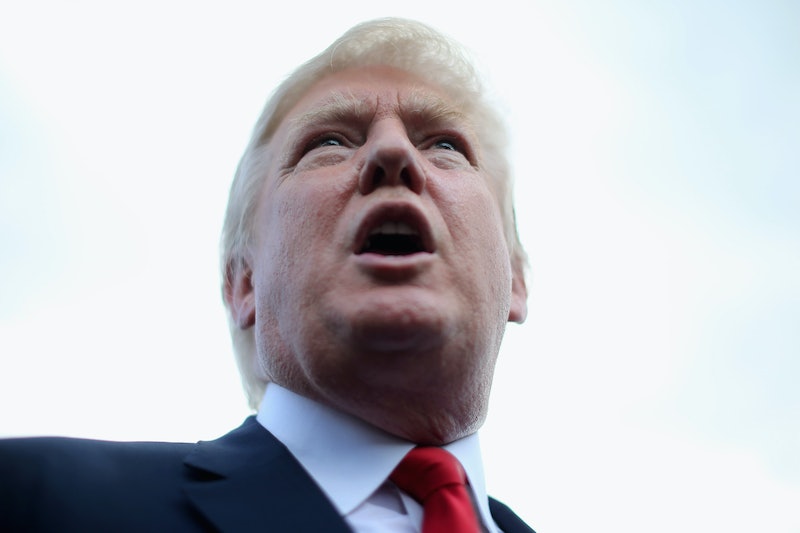 On Thursday, Republican presidential candidate Bobby Jindal released a video mocking Donald Trump. It should come as no great surprise that two political competitors would insult one another, but the creativity (I'm using that term loosely here) that clearly went into what I'm sure Jindal thinks in an hilarious smear ad is truly something to behold. And never, ever being one to sit quiet when under attack, or under any circumstance, really, fired back by pointing out that Jindal has never had any significant standing in the polls.

The video that started this exchange was released Thursday on Jindal's campaign website. The video is a compilation of Trump making statements about love. Specifically, who Trump loves (apparently: children, women, Mexicans, Hispanics, etc.), and who loves Trump in return. The compilation is set to The Beatles' "All You Need Is Love" (pause to consider John and George rolling over in their graves...), and ends in an even more bizarre manner with a loosely related clip from the movie, Anchorman. The whole video is totally bizarre, and it seems that Jindal feels he is triumphantly making a keen observation about Trump's antics, when really the entire U.S. has been complaining about Trump's self-aggrandizing histrionics for months.

Jindal also made a press appearance Thursday, referring to Trump as a "carnival act" and a "narcissist," according to NBC News. Later in the day Jindal released a series of tweets targeting Trump. Clearly he's on the tear against Trump, who has been leading in important Republican polls in Iowa and New Hampshire over other viable candidates who once seemed like shoo-ins.

Trump hasn't yet responded in kind over Twitter (which is kind of a shocker, to be honest), but Bloomberg Politics quoted a response from Trump that reads: "He did not make the debate stage and therefore I have never met him. I only respond to people that [sic] register more than 1 percent in the polls. I never thought he had a chance and I've been proven right." Touché.

Jindal did not in fact have enough support to make it to the first Republican primetime debate for the 2016 race on Aug. 6, unlike Trump who led (and still leads) in the polls and easily made it front and center. According to a recent CNN poll, Trump has a very comfortable lead among GOP voters with at 32 percent, while Jindal is scarcely registering in the polls at all. In a Public Policy Polling national poll released Sept. 1, Jindal was polling, as Trump stated, under 1 percent.