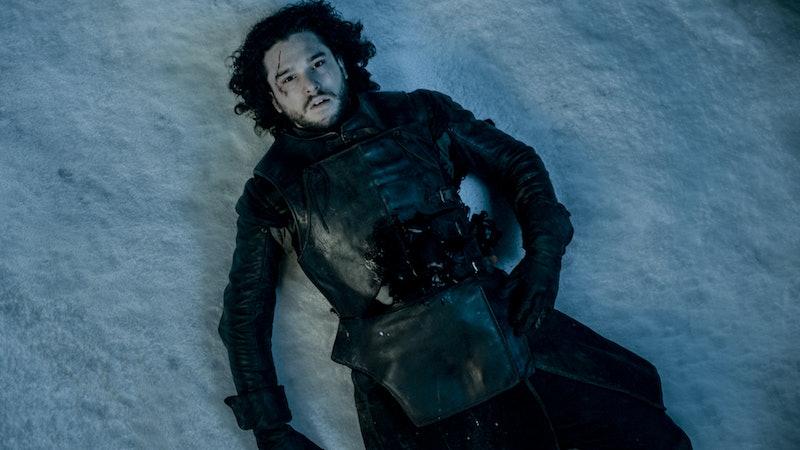 Look, I get it, Jon Snow fan theories are this year's hottest back to school accessory. Everybody's gotta have one. With all of the Game of Thrones theories about Jon Snow out there, I'm pretty sure that I'm Jon Snow's long lost twin sister who will fulfill a prophecy by resurrecting him somehow using contract negotiations, haircuts, and the Belfast airport. Whatever your personal theory about the bastard of Winterfell is, you've probably put some thought into how Game of Thrones will recover from that devastating Season 5 finale. The question is, does your theory hold up? We've devised a handy way to put it, and your faith, to the test.

Sometimes I feel bad for the other perfectly good characters on Game of Thrones who fans just sort of abandoned after they died. We were really all cool without Ros, Renly, and Robb? Why weren't we following Rose Leslie's every move after Ygritte got struck by Olly's arrow? Won't somebody think of Myrcella? There's a prophecy about her too... except that prophecy says that she's going become Queen and die. Well, half of that never happened — anybody? At some point, we have to accept that in a world where no deaths make sense to what we know about heroic tales, Jon Snow's alleged death makes the least sense of all. It can't possibly be for real.

Of course, a lot of the theorizing about the fate of this pivotal Westeros character comes from a real place of confusion. I'm not talking about the Night's Watch betrayal — we should not be surprised at all that this malicious group turned on their leader, again. What I mean is that while everyone involved in the HBO series insists that Snow is not "pining for the fjords" and has in fact ceased to be, that's not necessarily the case in George R. R. Martin's A Song of Ice And Fire novels. The last published book ends the same way the last season ends — on that cliffhanger. What's more, much of the contextual evidence that points to Snow's importance comes from the books more than the show. The Winds of Winter, which could be released as early as 2016, should answer that question... but could the show dare to be different? It's a lot to handle, I know. To help you stay positive in these times of trouble, here's a handy guide to whether or not Jon Snow is more than mostly dead.

Click HERE to test your Jon Snow theory once and for all.