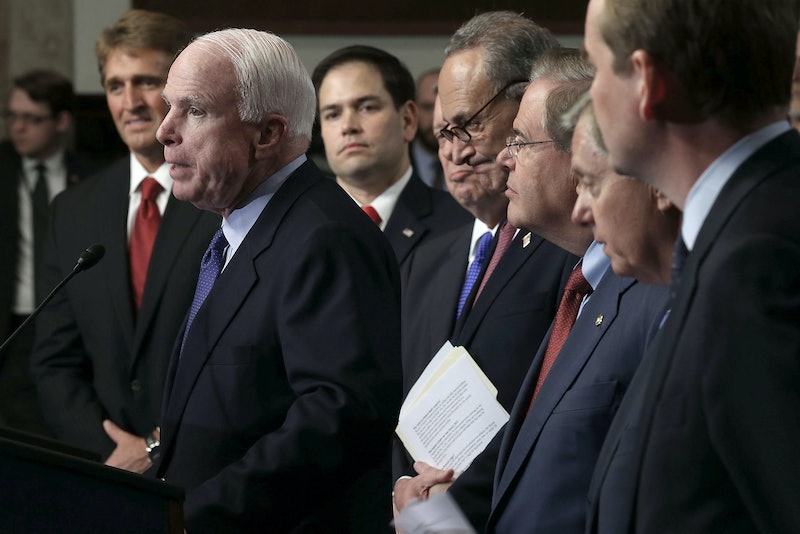 On Thursday, the Senate voted 68-32 to pass the bipartisan Gang of Eight immigration reform legislation.

The legislation would create a pathway to citizenship for the 11 million undocumented immigrants in the United States and enact the toughest border security in the country's history. The compromise also proposes important improvements to the detention system and immigration courts, which are currently majorly flawed, and some argue, corrupt.

The bill now moves onto the House, where Republican leadership has threatened it will not take up the Senate overhaul, and will instead choose to focus on much narrower legislation that would not provide a path to citizenship.

The supposed fiscal conservatives might want to consider that Congressional Budget Office found that Senate measure will save the U.S. $197 billion in the long run.

More like this
Joe Lycett Just Took HIs David Beckham Qatar Protest To A Whole New Level
By Sophie McEvoy
Iran Has Issued A Death Sentence Over Mahsa Amini Protests
By Catharina Cheung, Darshita Goyal and Maxine Harrison
Footballer Jake Daniels Shared His Thoughts On A World Cup Boycott
By Sam Ramsden
Matt Hancock's “Cringe” Jungle Karaoke Left Twitter Reeling
By Sam Ramsden
Get Even More From Bustle — Sign Up For The Newsletter