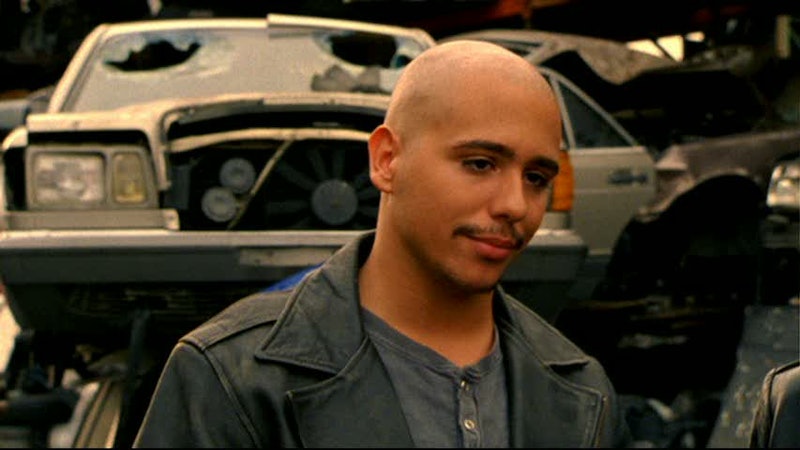 A gang leader with a heart of gold? Maybe describing Veronica Mars' Eli 'Weevil' Navarro as such would be a bit of a stretch, but it's fair to say that the PCH biker was a badass who personified the complexities of the Neptune class wars. To find out in the Veronica Mars movie (ahem, spoiler alert) that he was "attending tea parties at doll stores" as a (mostly) reformed family man was heartwarming, but any dedicated Marshmallow wants to know more. Luckily, Weevil himself — aka, Francis Capra — took over the official Veronica Mars Facebook page for a Q&A with fans, giving us all some more quality time with the former PCHer — as well as revealing some unexpected revelations about Weevil.

Of course, he shares his deepest feelings about real marshmallows (he prefers them on s'mores) and accepted compliments on his eyelashes ("It's so hard, I spend like an hour and a half putting them on, it's horrible") proving he has a lot of humor to go with his heart. But, beyond that, fans got a chance to hear his insights on potential Veronica Mars pairings, his feelings about Veronica herself, Kristen Bell, and what he has in common with Weevil... besides owning a motorcycle. Here are seven great revelations and quotes from the Q&A:

1. On His Fear Of Kristen Bell

We all know how tight knit the Veronica Mars cast is, but could it be possible that Veronica Mars was originally as guarded as... um, Veronica Mars? When a fan asked what was his favorite moment shooting with Bell, Capra admitted that the 5'1" actress cut a surprisingly intimidating figure, at least initially.

I was afraid of her! She's very tough and had a lot on her plate! There was a scene in the junkyard and during that scene I had a breakthrough and I made her smile. I was like, 'Okay, she doesn't hate me!'

2. On His Weirdest Fan Encounter

Let's be honest with ourselves, Marshmallows, we can all be a little... intense. I mean, it's safe to say that you don't break Kickstarter records without having an crazed fanbase. But, when asked about his weirdest fan experience, Capra had someone in mind who owned a little bit more than the DVD box set. According to Capra, this was someone who carried a piece of Veronica Mars with him everything... kind of literally:

I guess a guy who had saved some pocket lint that he had got from Percy's pocket lint or somebody. He followed us across the country! When he got up to the autograph line, he gave us the pocket lint! It was very weird!

3. On What He And Weevil Have In Common

As mentioned earlier, Weevil was a complicated character who circumstantially ended up on the wrong side of the law more often than not. So, imagine my shock when Capra said that he had more in common with Weevil than one would think, and that he actually considered Weevil a "much more honorable guy." Capra then shared all his reasons for loving Weevil:

I never got to finish school. The fact that Eli was able to honor that commitment to his Grandma, that is definitely something I'm jealous of. He had a hard life of being a have-not in an area full of spoiled kids. He allowed his cultural identity to show. There are so many things I respect about him. We're both attracted to the streets and gang culture. I grew up in the Bronx, but was quickly drawn into Hollywood. It gave me a big advantage. It still never took out that bug in me that wanted to be a bad kid and wanted to be thug, like Weevil! Though I'm not too great on the motorcycle in real life.

4. On What Other Neptune Character He Would Want To Be

Although him and Weevil have a soul connection, Capra was open to MANY possibilities of playing other Neptune residents. When asked what other Veronica Mars character he would be, Capra had a wiiiiide range of answers:

Well in real life, I would want to be Veronica, obviously, just being able to help so many people and be the answer to so many people's problems. Being in her shoes would be tough though, so it might be too much for me after a bit. But who wouldn't want to be Veronica, you know? As an actor, I always was really jealous of Percy and the character he got to play as Wallace. Percy is so much different than Wallace in real life so it was great to see that. Or even Logan! Logan is an amazing character too.

5. On Shipping Veronica And Weevil

This would be a rough pill to swallow for hardcore LoVe fans, but Capra is definitely open to the idea of Veronica and Weevil. He vouches that there was an intensity of feelings there, at least on Weevil's end:

Rob and I have never really talked about this, but I think Weevil had some really strong feelings for Veronica. I know he would have turned over a new leaf for her if he was given a shot. We never got there though. I think they definitely had natural chemistry and friendship. I envy their friendship. They do really well for each other with the skill sets.

6. On The Actual Veronica Mars Love Triangle At Hand

But when it comes to the timeless Logan vs. Duncan question, Capra was pretty diplomatic while seemingly falling on the right side of the argument:

I miss Duncan so much! But once you see Logan with Veronica, you just can't un-see it.

7. On His Hope's For Weevil's Future

Capra kept it classy and kept it simple:

Happiness. I just want him to be happy in whatever he's doing. A long life too! He's living dangerously. He needs to slow down.

Amen. Weevil definitely deserves to ride off into the sunset.