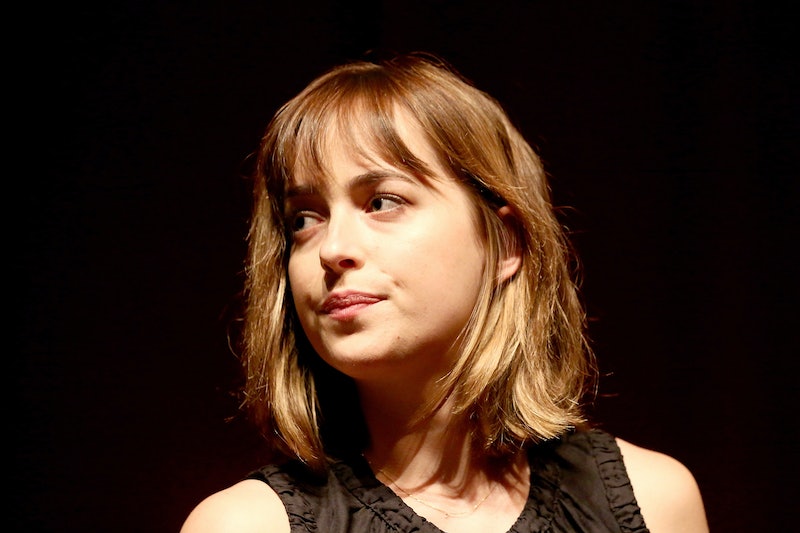 Here's a quick, mathematical riddle: What is 50 shades of awesome times two? Oh, just Fifty Shades of Grey actress Dakota Johnson going topless and makeup-free for the cover of AnOther magazine. The star actually posed without a shirt or makeup on two separate covers for the publication's Fall/Winter issue. And both of the results were quite elegant!

The styling of the covers is bare-faced and wet-headed, with the actress showing only hints of skin. There's nothing super expository going on here; the Johnson covers are simple, minimal, and artful.

Basically, her also-famous parents Melanie Griffith and Don Johnson won't be mortified when they see it. Remember how Mama Mel caused a media ruckus when she said she didn't want to see her baby girl playing the sexually submissive Anastasia Steele on the big screen?

If you are not familiar, AnOther is a visually-driven, fashion/art/photography/design magazine and it actually published three covers for this issue, with D. Johnson gracing two of them. Johnson's AnOther spread and feature are also sultry and revelatory.

Johnson is undeniably one of the breakout stars of 2015 thanks to her role as Steele in the softcore S&M smash. Her natural beauty, unfettered by contouring or overly done hair, comes to the forefront on this cover.

Sure, the toplessness is something, but what's more striking is her makeup-less face and wet, shoulder-grazing hair. I think she looks like a French fashionista here, thanks to her effortless simplicity.

Did the photog just catch Johnson coming out of the shower? It sure feels like it. There's a spontaneity to this photo that you can't fake.

Perhaps what's most intriguing about the covers is that I see Dakota Johnson, not Ana Steele.

Dakota's shoulders have been a prominent feature for her this year. Don't you love her '80s perm shag?

She has also rocked minimal, "no makeup" makeup looks, too.

Then again, she's gone glam with statement lips and a cleavage-baring dress. Shoulders, anyone?

Stripey '90s highlights and bangs? Dakota Johnson has been trend-hopping all year.

She was a red-hot siren at the 2015 Oscars, turning a simple high pony into a chic statement.

Dakota Johnson is clearly a style chameleon. She has tried a lot of different looks in a short period of time, yet I don't associate her with a constantly changing look like, say, Rihanna or Katy Perry.

Whether topless and fresh-scrubbed without a drop of makeup or glammed up, Dakota Johnson is quite a looker. We all need to start paying a lot more attention to her.