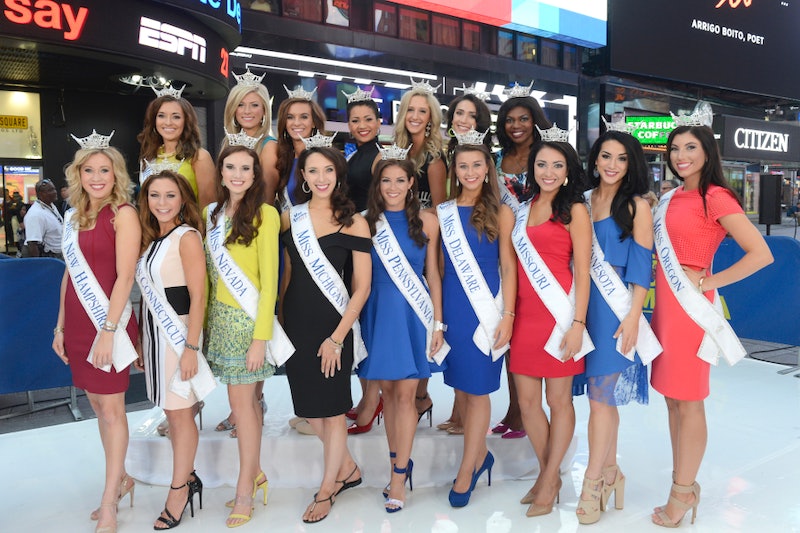 There are two types of people who watch beauty pageants: those pageant girls who are fully into it and take it seriously, and those who are looking for Toddlers and Tiaras-style trainwrecks to heckle. I could be wrong, but in general I haven't come across any casual pageant-watchers out there — except when it comes to Miss America. That one also picks up a few curious viewers, along with those who treat it like a guilty pleasure. But, when ABC airs the 2016 Miss America pageant on September 13, how guilty is guilty? Is there a certain comb-overed presidential hopeful who profits from the curiosity? In other words, is Donald Trump involved with Miss America at all?

If you're planning on tuning in, you can breathe a sigh of relief: Trump is not involved in any way with Miss America. Instead, he's the partial owner of a competing pageant. According to the New York Post, he has a 49 percent stake in the Miss Universe organization, which includes Miss Universe, Miss USA, and Miss Teen USA and according to Trump's tweet on Sept. 11, 2015, he also bought NBC's half of the organization. Miss America, on the other hand, is not owned by a business mogul/presidential candidate; it's a not-for-profit organization.

Despite his tweet on Sept. 11, Trump appeared to be looking to leave the pageant business altogether just days before that. According to the same article in the Post, "The real-estate magnate is exploring a sale of his 49 percent stake in the Miss Universe Organization after NBC and Univision dumped the beauty pageant shows over remarks he made about Mexican immigrants in announcing his run for president last month." That was before Trump got in even more hot water for comments about Carly Fiorina's being unfit to be president because of her face so, yeah, maybe he should sell and STFU when it comes to issues of women and beauty.

Then again, just because Miss America isn't owned by a presidential candidate accused of spousal abuse doesn't mean that it's a utopian organization, either. John Oliver took the nonprofit to task on the last season of Last Week Tonight; he claimed the organization vastly over promises on the amount of scholarship money it provides for its contestants. If you missed it, it's a must-watch — Oliver dives deeper into the Miss America organization than any pageant girl I know.

OK, so there's still a little guilt in your guilty pleasure. But it wouldn't be Miss America without a little bit of worry, be it judging people for the wrong qualities (although Miss America at least has a talent portion, unlike Miss USA) or turning a blind eye to the shadiness of those scholarships. But at least you're not supporting Trump.