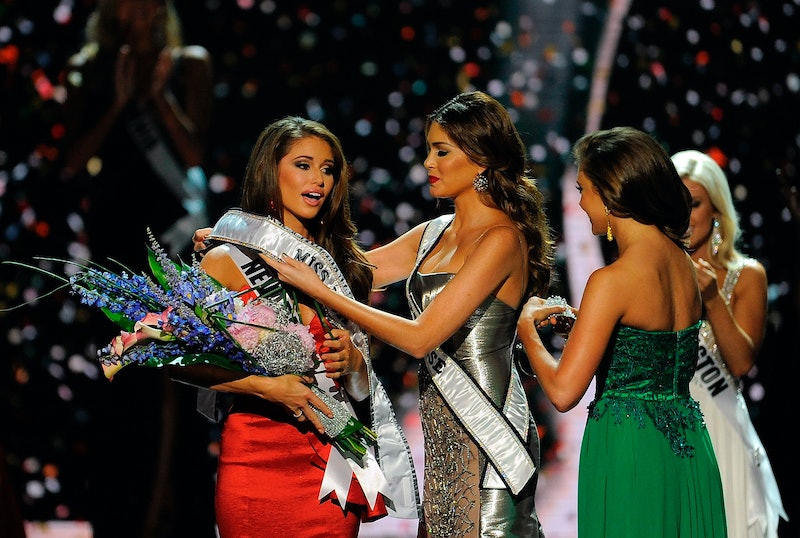 On Sunday, Miss America hopefuls will compete for the 2015 title while the show is broadcast live from Atlantic City, and if you're anything like me, you will spend the night rooting for your faves and crying into your ice cream about how your own childhood dreams of being a pageant queen will never be realized. But before we find out who will take the crown, there's one common misconception we have to settle. Miss America and Miss USA? Not the same thing. Not even close.

I've never competed in a pageant, but, incidentally, I know a lot about them — especially Miss America. My best friend, Whitney, is a pageant girl through and through. And after seeing her compete in Miss Alabama twice and holding more local titles than I can count over the past few years, I've learned more from her than just how to do my makeup so flawlessly that I look good even under an unflattering spotlight. And as someone who would ordinarily brush off the idea of parading around onstage in a swimsuit as something that's setting back the women's movement a good 30 years, instead I've gained a respect for the pageant system I don't think I would have had otherwise. Pageants are hard work, y'all.

And when it comes to the largest pageants in the land, depending on who you ask, some would say there's a bit of a rivalry between Miss America and Miss USA. Some people would describe Miss America as being made for women who are looking for a career and to further their education, while Miss USA is simply for women who are trying to break into modeling, but I don't think that definition is fair. Any pageant can be an empowering experience, though, and it isn't that one organization is better than the other — it's just that they're two separate entities altogether.

Miss America is a not-for-profit organization, but Miss USA isn't

Miss America is a not-for-profit organization per its website, and all contestants are required to not only have their own personal charitable platform, but they'll also work to support Children's Miracle Network if and when they win.

You probably already know that Miss USA is owned by Donald Trump (not that he'd ever let you forget it) and is a smaller sect of the Miss Universe organization. Although it's not a charitable organization in itself, they do partner with nonprofits like the American Cancer Society.

Both organizations are helping people, though, and that counts for a lot.

Miss America has a talent portion, while Miss USA does not.

And actually, at Miss America, talent is the most important portion of the competition — it accounts for 35 percent of each contestant's final score.

At Miss USA? Contestants are judged on swimsuit, eveningwear, and interview competitions.

Miss America is "the largest provider of scholarship assistance for young women," which is a huge thing. Contestants don't just win scholarships at the national competition — at the state level (and the local level), money for school is up for grabs as well.

Miss USA offers scholarships, too, but the main prize is thought to be the opportunity to compete in Miss Universe...but honestly, that luxury apartment in New York City doesn't hurt.

Many contestants compete in both competitions.

The age limit for Miss America contestants is 24, but Miss USA competitors have an age cap of 27. So if you've been trying to win a state-qualifying pageant and then age out, it's not a bad idea to try to get in on the Miss USA circuit since it buys you a few extra years. Could you imagine having to retire from a hobby when you reached a certain age? Is 27 really that ancient, let alone 24?

More like this
Ryan Reynolds Brought Some Famous Friends To Wrexham A.F.C's Last Game Of The Season
By El Hunt
Jake Daniels Just Became The UK’s First Active Football Player To Come Out As Gay Since 1990
By Sam Ramsden
What Is Jeanie Buss' Net Worth? The Lakers President Is Uber Rich
By Hugh McIntyre
Everything To Know About 'The Circle' Season 5
By Gretchen Smail
Get Even More From Bustle — Sign Up For The Newsletter