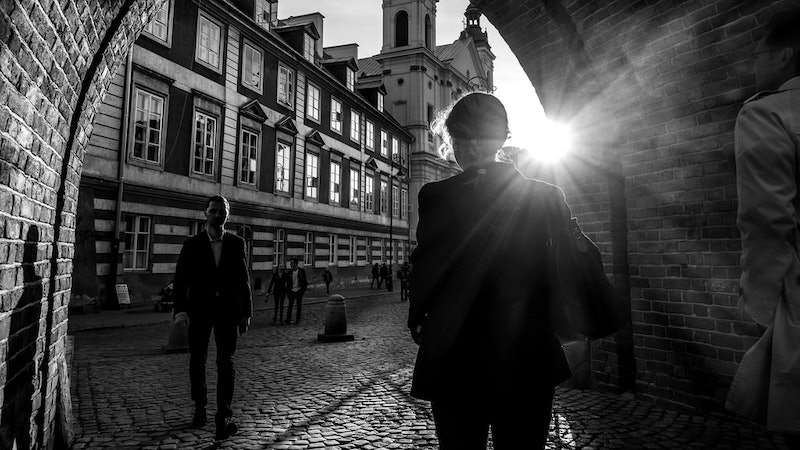 Street harassment is a threat that most women face on a regular basis, yet the problem is rarely taken seriously. Too often, we are told it's a compliment, we invited it, men can't help it, and on and on and on — you've heard the excuses. The new Hollaback! app for reporting street harassment has set out to to transform this culture of victim-blaming into one where harassers take the blame and victims receive the support they need.

"Harassment can be such an isolating experience, Hollaback! Deputy Director Debjani Roy tells Bustle via email. "This app seeks to change that, allowing for people to share their everyday realities with their communities to receive support and, importantly, recognition that this is a real problem."

By sharing our stories, Hollaback!'s blog reads, we also displace the shame of street harassment off ourselves and onto the perpetrators:

By telling your stories you are transforming an experience that is lonely and isolating into one that is sharable. You change the power dynamic by flipping the lens off of you and onto the harasser.

The same blog post notes that it's especially important to challenge "the myth that our clothes are an invitation." Hollaback! partnered with fashion retailer ModCloth to dispel that belief in this video explaining that women aren't dressing to be catcalled:

“We know that movements start because people tell their stories. In the last five years, we’ve seen the public conversation on street harassment change drastically as people stand up and share their experiences," said Hollaback! Executive Director and Co-Founder Emily May in a press release. The app hopes to further this conversation.

When you open the Hollaback! app, you'll see a map based on your GPS location with dots representing places where harassment has been reported. You can then click on a dot to see what happened there and offer support to the victim by clicking "I've got your back."

In addition, the "take action" page lets you click a button to indicate that you have witnessed or experienced harassment. The incidents you can report include not just sexual harassment but also homophobia, transphobia, racism, and other forms of misconduct. You can then add this incident to the map, along with a description if you so choose. If you're in New York City, you can also report the incident to the NYC Council.

The app also creates a personal map containing your own reports that you can share on social media. The Hollaback! app's FAQ page contains more detailed instructions for how to use it.

I only wish people could show this much support for victims of street harassment in real life. In my experience, witnesses usually look the other way. Even those who are against catcalling and other threatening behavior simply don't know what to do. For those who want to be better bystanders, Hollaback! put together an infographic on ways to intervene in street harassment. "Even a knowing look to the person being harassed can reduce their trauma and experience of isolation," Hollaback!'s website reads. For now, it's nice to know that if nobody on the street is sympathizing with me when I am catcalled, followed, or groped by a stranger, I can find a community of people online who are.