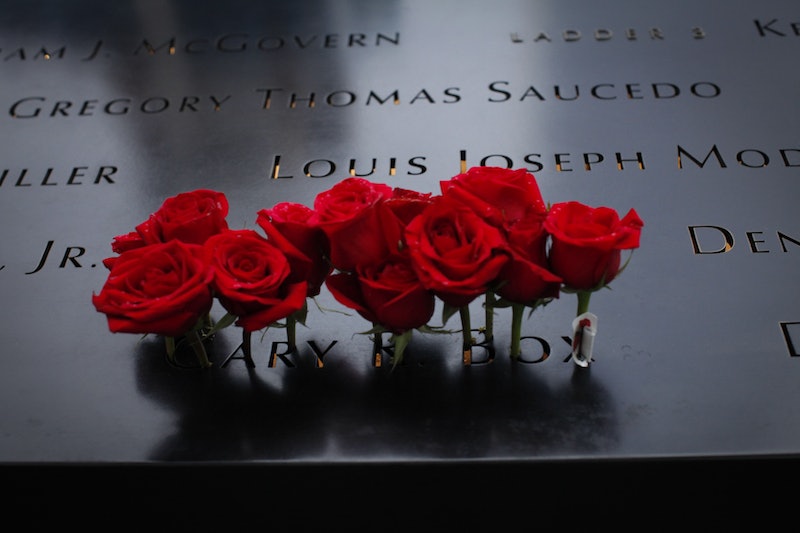 Some have said that 9/11 changed western literature. In the years since, a disturbing photograph became Don DeLillo's Falling Man became Aimee Pozorski's Falling after 9/11, which is featured here. If you think one event can't change literature, look at how it has changed us.

We all remember where we were. Living on the other end of the country, I have a memory of distilled fear and anxiety, a sense of disturbance and loss, but nothing personal. I didn't know anyone in New York. People living nearer to the World Trade Center, undoubtedly, remember the day differently. I won't presume to know how that feels.

But I do know that how we relate to traumatic events in the U.S. has been forever augmented by the events of that one morning. We contrast wishing we could forget it with swearing that we never will. Our films, art, and books have changed, and they reflect our new, post-9/11 attitudes, both good and bad.

In curating this shortlist of 9/11 literature, I've tried to distill the last 14 years of thoughts and words into five pieces of writing. These are the articles and books that, in my opinion, best capture our reactions — both fearful and courageous — to one of the most traumatic events in the United States' cultural history.

This article ran in The New Yorker's September 24, 2001 issue. Featuring Susan Sontag, Amitav Ghosh, and Rebecca Mead, among others, "Tuesday, and After" is a short literary collection comprised of gut reactions and political sentiments from nine incredible writers, who muse and mourn the immediately-post-9/11 world.

In the Shadow of No Towers by Art Spiegelman

Published in 2004, Maus author Art Spiegelman's In the Shadow of No Towers is a personal essay on the day's events and its political aftermath. Fear and anger abound, but the graphic novelist remains level-headed as he negotiates with his own emotions and the policies of his country.

Falling after 9/11 by Aimee Pozorski

In Falling after 9/11, Aimee Pozorski traces the cultural impact of one photograph, which depicts a man leaping to his death from the World Trade Center, and what our reception of that image in the years following 9/11 reveals about us as a society. More broadly, Pozorski's book is an examination of how western art and literature depict trauma in a post-9/11 world.

The Reluctant Fundamentalist by Mohsin Hamid

In The Reluctant Fundamentalist, Changez, a Princeton graduate responds to post-9/11 Islamophobia by growing out his beard and moving back to his home country of Pakistan. When one of his students becomes involved in an assassination plot, Changez finds himself thrust into the spotlight.

The Submission by Amy Waldman

Amy Waldman's 2011 novel, The Submission, concerns a 9/11 memorial design contest. When the chosen winner is revealed to be an American Muslim named Mohammed Khan, the ensuing controversy divides the U.S. along ideological lines.

More like this
16 Novels That Paint A Realistic Portrait Of Abortion
By K.W. Colyard
Lauren Rae Is Bringing Back The Sex And The City Vibes In Her New Memoir
By Shahed Ezaydi
Annie Lord’s Memoir Will Make You Believe In Love Again
By Shahed Ezaydi
Sparks Fly Fast & Furious In 'Honey & Spice'
By Bolu Babalola
Get Even More From Bustle — Sign Up For The Newsletter